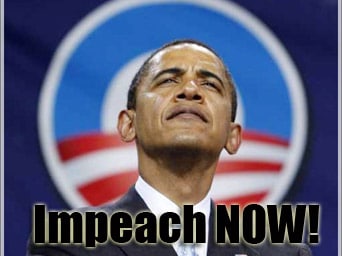 It’s time to impeach President Obama and urge candidates who stand for peace to run in the upcoming presidential primaries.

President Obama is no Democrat in the traditional meaning of the word. He has not only failed to tackle the nation’s unemployment woes and retraining needs, as a real Democrat would do, but he’s been a player in the Bankers’ Bailout and he’s indicated his willingness to compromise Social Security and Medicare, two highly successful, humanitarian systems that are a lifeline to the vast majority of the nation’s elderly, sick, and infirm.

Mr. Obama has also failed to lift his hand effectively in behalf of the struggling poor, particularly our Hispanic, African-American and rural poor. Again, as in the time of Franklin Roosevelt, we see one-third of a nation ill-housed, while true unemployment hovers at Depression Era levels, closer to 20 per cent than 10 per cent and college graduates cannot find jobs.

Yet worse than anything Obama has done or not done domestically, are the illegal wars he’s waging across Asia and Africa, several of which he inherited from the preceding criminal in the Oval Office and to which he might have made a speedy end. Quite on his own, however, he has expanded the war in Pakistan and has initiated new wars in Libya, Sudan, and Yemen. These wars are being pushed despite a building majority opposition of Americans who are telling Congress and the pollsters they want the return of our troops from distant battlefields and bases.

Mr. Obama has also granted himself kingly powers to destroy human beings on suspicion of wrongdoing, and has sent hundreds of innocent people, children included, to their deaths in the process via drone plane attacks. He continues to operate countless prisons around the world created by his criminal predecessor President George W. Bush, a mass murderer, where human beings have been tortured and murdered, denied due process of law, and where kidnapped men are suffering year after year in gray limbo, and, incredibly, where even children have been tortured and raped. He is keeping Guantanamo open despite his promise to close it and he denies those imprisoned there, as elsewhere, lawyers and fair trials. If he is the best Harvard Law School can produce it should be shut down. A constitutional lawyer who conducts himself this way should be disbarred; a president who conducts himself this way should be impeached and prosecuted.

One tipoff to Mr. Obama’s character has been his cruel punishment of Army intelligence specialist Bradley Manning for performing a humanitarian service—blowing the whistle on U.S. helicopter pilots in Baghdad who killed defenseless civilians and reporters. You would think that the Pentagon would want to know if any of its soldiers committed war crimes. Instead, it looks the other way. No president in our history ever has gone after whistle-blowers with the vengeance of this man; and only his immediate predecessor has shown so great a proclivity not to prosecute the guilty torturers and murderers among the jailers of the military, CIA, and contract fighters.

The United States has attacked Iraq based on lies so that today that an innocent nation lies in ruins, its infrastructure shattered, its electricity in short supply, suffering tragic unemployment levels, reeking from sewerage wastes and radioactivity that is sickening and killing its people, yet who has heard from Mr. Obama about restitution for America’s war crimes, for rehabilitation of Iraq’s people and for rebuilding of its ravaged population centers? Instead, Iraq’s oil resources are being looted by the occupiers. What’s more, the Iraq War is costing this country thousands of lives in killed and wounded and an estimated $3 trillion dollars in treasure. Yet it has cost the people of Iraq far more, an estimated one million lives, and no American candidate, including the president, is talking about it. That is our national disgrace. Undoubtedly, the ugly and misplaced thirst for vengeance over 9/11 that animates our wars in Iraq and Afghanistan likely will be viewed by future historians as lunacy—particularly as the attacks of that day, like the anthrax attacks that followed a month later, give off the stench of “inside jobs.”

We tolerate President Obama, the war-maker and tyrant, at our peril. He is a menace to America and humankind, the palpable, living symbol of the military-industrial complex run amok. He should be impeached. Viable candidates to replace him need to step forward and stand for election. The Democrats still have a number of capable prospects. And the Green Party is calling for an immediate withdrawal from the Middle East and its candidates should be rewarded accordingly at the polls. President Dwight Eisenhower may not have been the greatest American president but he had the vision to run on a platform that made sense to the electorate: “Peace and Prosperity.” That’s what this country, like the world, urgently needs today. We Americans can never put right the destruction and death we have wrought in recent years. Sadly, we are not even thinking about it.

About the Writer: Sherwood Ross is a Miami-based journalist, who formerly was a columnist for major dailies and wire services, directs the Anti-War News Service. To comment or contribute to his operation, e-mail him at [email protected]