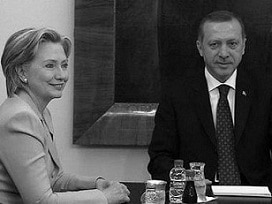 Isn’t it time for Washington to recognize that it has become a rogue state and for Hillary to come home, sit down, and stop talking?

While it would seem that international conferencing and seeking to overthrow two regimes would make for a busy weekend for even the most peripathetic secretary of state, Hillary also decided to whack her host, Turkey.

Secretary of State Hillary Clinton was at it again last week. She was in Turkey attending a NATO gathering dealing with what to do about the succession in Libya, based on the perhaps erroneous assumption that Muammar Gadhafi is on his way out.

Clinton and NATO decided, based on their own admittedly partial view of the situation, that the Gadhafi regime is no longer legitimate and that the rebels who are trying to topple him are now to be regarded as the legal government.

The “international recognition” will enable them to use the roughly $30 billion in frozen Libyan government assets, mostly located in American and European banks. Hopefully, things will go better than they did in Iraq back in 2003. Washington sent in a proconsul supported by a host of neocon Myrmidons to make sure things would run smoothly.

More than $20 billion of Iraqi state “reconstruction” funds were unfrozen and then went missing after liberation took place. The Iraqi people are still waiting for the electricity to come back on.

Clinton also took some heavy-handed swipes at Syria, making clear that both she and her boss want to see regime change. Three hundred fifty representatives of Syrian dissident groups were perhaps not coincidentally present in Istanbul for a “National Salvation Conference,” so Clinton took the opportunity to denounce President Bashar al-Assad’s government as having “lost legitimacy.”

The White House backed up Clinton’s possibly impromptu comment, and over at Foggy Bottom, Victoria Nuland, the State Department’s neoconnish press spokeswoman, made the case more explicitly, denouncing “a Syrian government that continues to beat, imprison, torture, slaughter its own people.”

If Syria sounds like any number of regimes that the United States has quite comfortable relationships with, it should.

While it would seem that international conferencing and seeking to overthrow two regimes would make for a busy weekend for even the most peripatetic secretary of state, Hillary also decided to take on her host, Turkey. She lauded Muslim Turkey as a model for the future development of Arab Spring states but then whacked its government for imprisoning journalists.

Whoever was briefing her from her staff or from the Embassy evidently neglected to describe how Turkey has a wide open and fairly raucous press that often is very critical of the government. Most of the 60 detained journalists are reported to have close and continuing ties with separatist groups, including the terrorist Kurdish Workers Party (PKK). Others are believed to be linked to right-wing extremists who have been advocating a military coup to overthrow the civilian government.

Turkish sources make clear that there is little doubt that the authorities have quite likely overreacted and used sometimes flimsy evidence to concoct their cases against at least some of the journalists, but the political engagement of many of those arrested might suggest that there is more to the story than meets the eye.

I will confess right here that I have a particular fondness for Turkey, having lived and worked there, and I continue to have many close Turkish friends.

Turks are particularly stubborn and extremely loyal, but my recent trips to the country have revealed that they are also utterly fed up with United States policies in the region.

The Turkish media is full of the latest missteps by Washington, with particular emphasis on how the entire Near East has been destabilized through U.S. military action and the “war on terror.”

Even shopkeepers are caught up in the outrage. On my last visit I was harangued for 30 minutes on U.S. policy by a rug merchant whom I have known for 30 years, a man who has visited the United States and who has many American friends. Even though I agreed with nearly everything he said, he insisted on explaining things in some detail “in his own words,” a prolonged tale of Washington’s arrogance and ignorance.

The U.S. media fans the flames and reciprocates by frequently reporting on Washington’s disenchantment with Turkey and the direction it is moving in, but they are really only expressing their own biases, which are generally measured through their consideration of what Israel appears to want.

Recently, two American senators have indicated that they will work to derail any planned NATO missile defense deployment in Turkey unless Ankara agrees to share all information with Israel.

Perhaps someone should point out to Sens. Jon Kyl and Mark Kirk that Israel is not a member of NATO and is not in any formal alliance, with the United States or anyone else. Which means that the United States would be compelling NATO to participate in the defense of Israel without any apparent reciprocity on the part of Tel Aviv.

In the middle of all the finger pointing, the United States seems to have lost sight of its own national interest.

It is true that Turkey did not support the invasion of Iraq, but it was the right decision not to do so. If a few more countries had also said “no,” perhaps the United States would not have killed a couple of hundred thousand people and wasted more than $1 trillion dollars while accomplishing absolutely nothing.

It is also true that Turkey has condemned Israeli policies and its occupation of the Palestinian territories, but most of the world would consider that a perfectly legitimate viewpoint.

Turkey is also derided for becoming more religious even though most of its people have always been devout, and the open expression of belief is also part of its becoming more democratic.

In addition, the mainstream media frequently claims that Ankara is soft on Iran sanctions and aligning culturally and politically with its eastern neighbors. Critics forget that Turkey’s attempts to become part of the European Union have been consistently rejected while the country itself is geographically mostly in Asia and sharing borders and trade relationships with quite a lot of the rest of it, including Iran.

To my mind, Turkey is far too nice to Hillary and to Washington. Rather than be lectured, Prime Minister Recep Tayyip Erdogan might suggest that Clinton go away and find another bone to chew. If the Middle East is in a catastrophic state, it is precisely because of Washington’s meddling and its perennial tilt toward Israel.

Erdogan might note that Turkey’s economy is booming because it takes pains to remain on good terms with everyone, and he might reasonably ask why Washington cannot recognize its own failure to put its house in order.

How many congressmen are suggesting that the costs of empire be cut to help pass a federal government budget? Only a handful, while to virtually everyone else in the world watching the spectacle of American impotence on display, the mailed fist and the angry frown of Hillary Clinton are what the United States represents.

What is going on in Syria is another poster child for what is wrong. I have no particular insight into what is occurring in Syria except for my belief that the United States government quite likely knows little about what is taking place and is probably wildly wrong about what the dissidents represent and what they would be likely to do if they were to seize power.

There might be a few Patrick Henrys among them ready to go all out for the cause, but I doubt there is a Thomas Jefferson who can pick up the pieces and put Humpty Dumpty back together. Would a destabilized Syria be a precondition for an Israeli attack supported by Washington? You heard it here first.

In the case of Syria, the United States has made plain right from the get-go that it is supporting dissidents through training and provision of technology and infrastructure to enable them to communicate and organize.

On July 7, U.S. Ambassador Robert Ford traveled with full ambassadorial entourage to the city of Hama, believed to be a hotbed of resistance to the government. He did so to express his support for the rebels. When he returned to Damascus, an angry crowd, no doubt egged on by the regime, attacked and entered the U.S. Embassy and was eventually driven out of the building by the Marine guards.

At the end of it all, it was difficult to discern what the ambassador’s trip was intended to do apart from increase tension. It did produce a tit-for-tat that benefited neither Washington nor Damascus, nor, insofar as can be determined, the rebels or reformers, depending on how one regards them.

The examples of Libya, Syria, and Turkey reveal that the United States persists in thinking that it can lead the world by intimidation rather than by example.

One hesitates to construct an analogy, but if the ambassador of an unfriendly country, Venezuela perhaps, were to publicly announce that his country would support separatists in the United States with training and communications equipment and, furthermore, that he would travel to attend an anti-government rally in Texas or Alaska, it would certainly cause considerable heartburn, and I can well imagine President Barack Obama taking aggressive steps to stop the activity.

The United States is ever the proverbial pot calling the kettle black, acting out in ways that it denies to others. Hillary Clinton and Barack Obama are no strangers to the word “hypocrisy” in their dealings all around the world. Yes, it is certainly true that people are protesting and dying in Syria, but it is not our quarrel. It is something that the Syrians themselves will have to sort out.

But perhaps there is a more fundamental question. Who is Hillary Clinton to pronounce on the legitimacy of any foreign government? Victoria Nuland’s condemnation of Syria cites “beating, imprisoning, torturing, and slaughtering,” but doesn’t Washington do all of that and more?

Abu Ghraib, Guantanamo, CIA secret prisons, and Predator drone strikes surely tell the tale. No other government claims that it has the right to kill its own citizens anywhere in the world based on secret evidence. Isn’t it time for Washington to recognize that it has become a rogue state and for Hillary to come home, sit down, and stop talking?

Philip Giraldi, Executive Director of Council for the National Interest (CNI), is a former CIA counter-terrorism specialist and military intelligence officer who served 18 years in Turkey, Italy, Germany, and Spain. He was Chief of Base in Barcelona from 1989 to 1992, and designated as the Agency’s senior officer for Olympic Games support. Dr. Giraldi holds an MA and PhD from the University of London. He speaks Spanish, Italian, German, and Turkish.