What kind of democracy is this?

It’s not a democracy when a realm is controlled by an unelected power broker with enforcers who run the government for another country.

The past week’s news has been dominated by reports of scandals in Rupert Murdoch’s media empire. As journalist Ted Newcomen points out, there’s more to the story:

The latest revelations in the UK about phone hacking, bribing the police, and frightening political leaders are just the tip of a very toxic iceberg that had the likes of Tony Blair going cap in hand to Murdoch’s corporate functions when he was still British Prime Minister.

What power has media mogul Murdoch had? And how has he misused it?

Gordon Duff, Senior Editor of Veterans Today, asserts that “Murdoch is now admitted to have controlled the political systems in Britain and America for two decades.  He has had the power to choose national leaders, make policy, pass laws at will,”

Murdoch media has been endless propaganda for war, and various other deadly policies. British writer Robin Best divulges how numerous the occasions of Murdoch warmongering influence have been:

Rupert Murdoch’s newspapers and TV channels have supported all the US-UK wars over the past 30 years, from Margaret Thatcher and the Falklands war in 1982, through George Bush Senior and the first Gulf War in 1990-91, Bill Clinton’s war in Yugoslavia in 1999 and his undeclared war on Iraq in 1998, George W. Bush’s wars in Afghanistan and Iraq, with Tony Blair on his coat tails, and up to the present, with Barack Obama continuing the wars in Afghanistan and Iraq and now adding Libya to his tally of seven wars. 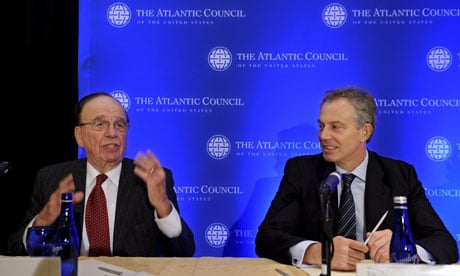 Physician/political activist Mohamed Khodr suggests how such a travesty is possible in a democracy like America:

The best that can be said about Fox News Channel and its bigoted, racist, fear mongering hosts and pundits is that it is committing “Intellectual Terrorism” upon a nation devoid of intellectual curiosity, a passion for truth and civic involvement, a self absorbed populace distracted with consumerism, and devoid of all outrage at the crimes committed by its government and corporations here and abroad.

Gordon Duff adds a note on the deceptions that permeated the media and misled the public:

Now we find the news itself controlled the governments and may well have written the scripts to the wars, the rigged elections, the acts of terror and the misdirection that sent America into a decade of cruel and useless bloodletting after terror groups that never existed in the first place.

Western nations are currently outraged by the revelations of power and poison wielded by Rupert Murdoch’s media empire.

It’s a bit late now to be angry because the lies, distortions and propaganda reach back over many decades, not only by Murdoch but others who control huge tracts of Western media all skewed with a pro-Israeli bias.

According to Jack Shaheen author of Reel Bad Arabs, the mindset of most Americans and Europeans is Zionist embedded, caused by a continual barrage of propaganda going back to kiddie cartoons and permeating over 1,000 films.

Americans boast about having the best democracy in the world.  How can they make that claim when the system, on many different levels, is dominated and controlled by the dictates of one small group whose loyalty is to a foreign country?

Members of the US congress must yield to the dictates of Israeli-firsters or their careers will be compromised. What kind of democracy is this?

It’s not a democracy when a realm is controlled by an unelected power broker with enforcers who run the government for another country.

Murdoch’s public apology for the crimes of his stooges is a ruse meant to pacify an enraged public while Murdoch-the-mogul remains in power.

As political commentator Mike Whitney makes clear, “The firestorm in the UK is not really about phone hacking at all. It’s about corporate fiefdoms and unelected oligarchs who control the flow of information and use that power to their own advantage.”

It’s past time to break up the media gang and incarcerate the boss.

Paul Balles is a retired American university professor and freelance writer who has lived in the Middle East for many years. He’s a weekly Op-Ed columnist for the GULF DAILY NEWS . Dr. Balles is also Editorial Consultant for Red House Marketing and a regular contributor to Bahrain This Month.

Who is Rupert Murdoch ?