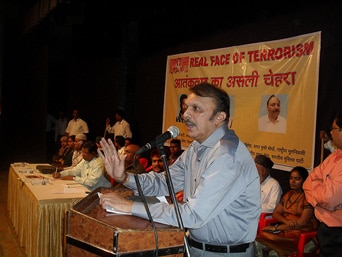 In India Former Maharashtra Inspector General of Police S M Mushrif wrote in “Who Killed Karkare-The Real Face of Terrorism in India”  that  all the reports that were available to him suggest that the Indian Intelligence Bureau (IB) was aware of the attack at least five days in advance. They knew the entire operation; the route these terrorists were taking. However, it is strange that they did not pass on this information to the Mumbai police.This lack of intelligence led to the Mumbai attacks and some right-wing groups upset with the investigation into the Malegaon incident taking advantage of the situation killed Karkare.

As the ancient poem of a mystery cat macavity, goes even when the Secret Service decides that Macavity was behind a loss, they can’t get him there as “he’s a mile away.” The international  relationship  has become a mystery with significant shift towards  intelligence and covert relations. The reality considered an absolute value had becomes dynamic with the uni-polar world moving towards information warfare. The psychological  operations as part of information operations  launched now focus on creating confusion and demoralisation amongst target nation and increase the wedge between the leadership, security apparatus and general population. However, the environment of false flag started in last decade are now fast moving towards exposure to reality paving way for a better understanding amongst the target Nations. The perception of linking taliban , muslim and extremism seem to be withering away as the world encounters reality. The blast in Oslo  had all the finger pointing  towards Pakistan till Norway police declared that the Christian Extremists were involvement in the  blast.

The eyewitnesses say that a second shooter was active in the massacre at the Utøya summer youth camp outside of Oslo. It has also come to light that a special police unit had been conducting a drill or exercise in downtown Oslo which involved the detonation of bombs – exactly what caused the bloodshed a few hundred meters away little more than 48 hours later.  According to a report foreign intelligence agencies had been conducting a large-scale program of recruiting retired Norwegian police officers with the alleged purpose of conducting surveillance inside the country. This program is known as SIMAS Surveillance Detection Units, Daily Telegraph reported that Christian fundamentalist attacker held meeting in London, in April 2002, to reconstitute the “Knights Templar”, a Crusader military order. Police searching breivik’s farm found three tons of artificial fertiliser, suggesting as much as three tons went into making the bomb.

In India Former Maharashtra Inspector General of Police S M Mushrif wrote in “Who Killed Karkare-The Real Face of Terrorism in India”  that  all the reports that were available to him suggest that the Indian Intelligence Bureau (IB) was aware of the attack at least five days in advance. They knew the entire operation; the route these terrorists were taking. However, it is strange that they did not pass on this information to the Mumbai police.This lack of intelligence led to the Mumbai attacks and some right-wing groups upset with the investigation into the Malegaon incident taking advantage of the situation killed Karkare. S M Mushrif also reveals that the cases against the Students Islamic Movement of India (SIMI) were faked. All the boys who were arrested were found to be innocent during the course of the investigation and later court dismissed the cases against the boys. Gujrat riots still remain in memories of Indian Muslims. Famous writer Smita  Narula describes Gujrat riots as Genocide of Muslims and states. According to her “What happened in Gujrat was not a spontaneous uprising, it was a carefully orchestrated attack against Muslims”. Today Sikhs, Christian, Muslims and Dalits (the untouchable humans) are victim of state policies and inequality in India. Human rights organizations are registering number of abuse cases against minorities.

Although the Indian State and its proponents seek to blame past governments for human rights abuses and assert that India is no longer violating human rights but independent research by numerous organizations, indicates otherwise. International human rights organizations, such as Human Rights Watch and Amnesty International, continue to condemn India for its failure in preventing and in many cases advocating, the violation of human rights against its minority and underprivileged communities, including women. Surprisingly it is seldom that such activities get focus in Indian media. The Indian media usually remains Pakistan centric as a proactive approach to hide their own short falls.However, for the first time the intelligencia has raised questions on the role of CIA agents like  David Headley Coleman & the fact that India  has more than 3500 Americans unaccounted for in their country as per the records of the Home Ministry . After july 2011 attack in Mumbai,  an understanding is developing where other elements are seen taking advantage of the old  Indo – Pak perceptions .

The  recent terrorist attack in China, Killing of Iranian Nuclear scientist and series of cross border attacks in Pakistani  areas bordering Afghanistan  in recent days seem to have some links with the handlers in Afghanistan. A report on training of Afghan  National Army exposed  that  more than 75% afghan selected  for Army are drug edicts. This breed of soldiers can be easily used by any agency having money to fulfill  their drug requirements. The US exit strategy leaving behind  such a ground force having air support at mercy of American basis leave lots of questions  for the future role of Afghanistan as part of South Asia. The story published in Telegraph on  how US commanders fight the Taliban during the day and dine with them at night tells that  Lieutenant Colonel Tom Savage waits for his opposite number in the Taliban to turn up for tea,  a man whose day job is killing fellow US Marines. Lt Col Savage, says they may well have killed his own men, and almost certainly some of the British whom the Marines inherited part of southern Afghanistan from last year. But he says they are tired of fighting, and if he lays down his weapons he could have a significant effect around here. I have to put aside what he may have done in the past, and think about what he can do in the future.

According to a military-led investigation U.S. trucking funds reach Taliban. The report compiled in May and reviewed by an  international news paper, say the military found “documented, credible evidence  of involvement in a criminal enterprise or support for the enemy” by four of the eight prime contractors.  Tierney, now the top minority member of the national security subcommittee of the House Committee on Oversight and Government Reform, said “I would hate like hell to think my kid was over there” and the Taliban was “coming after them with something bought with our taxpayers’ money,” When asked by a Pakistani journalist about U.S. military relations with Pakistan, the chairman Mullen said there is a “recalibrating” of relations. Pakistan military Chief Gen Kiyani’s statements after Osama incident also speak of increasing mistrust.

In such intense gray environment of perceptions use of locals by exploiting their weaknesses is a common lead behind most of the terror incidents in the world  where  chances of common handler and a mind set can not be ruled out.  The Challenges for the world in general and South Asian region in particular are real with all the potentials to escalate after 2014. The thinking process has to change if  Nations are serious in defeating not only the terrorists but also the mind set behind them. SAARC countries need to increase confidence amongst each other and find common enemy. The opening of dialogues between Pakistan and India is a great opportunity. Endeavors to get China, Saudi Arabia and Iran to realize the oncoming challenge is a step in right direction. Role of a pragmatic, selfless and a true democratic  leadership having firm belief in prosperity of the people can make a difference for coming generations of this region . Defeat of Macavity may be difficult but collective and regional approach can certainly blunt the intensions of converting our part of the world into dystopia. Unfolding of events provide an opportunity for the leaders and the Nations to act in  collective interest and stop implosions.