Home Veterans Antichrists in the Air Force and Just Who Would Jesus Bomb? 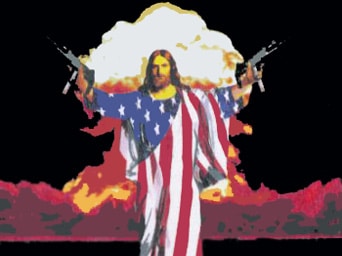 An Antichrist in anyone who is anti/against what Christ was all about: NONVIOLENCE and forgiving ones enemies-NOT bombing, torturing or militarily occupying any!

Who Would Jesus Bomb

“The United States Air Force has been training young missile officers about the morals and ethics of launching nuclear weapons by citing passages from the New Testament and commentary from a former member of the Nazi Party, according to newly released documents. The mandatory Nuclear Ethics and Nuclear Warfare session, which includes a discussion on St. Augustine’s “Christian Just War Theory ” is led by Air Force chaplains and takes place during a missile officer’s first week in training at Vandenberg Air Force Base in California.

In the latter days of Nero’s reign [54-68 A.S.] through the domination of Domitian [81-96] Christians were persecuted for following the nonviolent, loving and forgiving Jesus.

That Jesus was first left behind when Augustine penned the heretical “Just War Theory” for that was when Church and State got in bed together and “our problems stem from our acceptance of this filthy, rotten system.”-Dorothy Day

Augustine was the first Church Father to consider the concept of a ‘Just War’ and within 100 years after Constantine, the Empire required that all soldiers in the army must be baptized Christians and thus, the decline of Christianity began.

With the justification of war and violence supplied by Augustine’s Just War Theory, wrong became right.

Nothing has changed in two millennia, for in today’s Orwellian world politicians claim the way to peace is through war and that nuclear weapons provide protection.

American money claims ‘In God we Trust’ but the truth is America’s faith is in an out of control Military Industrial SECURITY/Surveillance Complex which seeks domination, power and control over any who would defy and challenge the American status quo.

In 313 AD, Emperor Constantine legitimized Christianity and thus, those who had been considered rebels and outlaws began to enjoy political power and prestige and were now protected by an earthly king.

Both a patriarchal monarchical state and church were formed at the same time. Power struggles and debates were common among the early Christians. Individual churches determined which texts were read, and they all had their favorites. Constantine sought to unite his empire, and uniting the church was a savvy political move. He announced he would pay for fifty illuminated copies of scripture to be bound, and thus the biblical canon was established and sealed. There was fierce debate among the bishops about what should be included and what left out.

The proto-orthodox, who had now become the dominant voice, determined what was heretical for everyone. The proto-orthodox demanded much-loved scripture to be burned, usually because it did not fit their understanding of God. We know more today about how diverse Christianity had once been with the discovery of the Nag´ Hammâdi Library. [Read more…]

Jesus’ other name is The Prince of Peace, and with the marriage of church and state, his true teachings were reinterpreted. The justification of warfare and the use of state sponsored violence corrupted what Christ modeled and taught.

Jesus was always on about WAKE UP! The Divine already indwells you and all others. Christ taught that to follow him requires that one must love ones enemies; one must forgive those who hate, curse and revile them, without even a thought of payback.

Before Emperor Constantine brought Christianity into the mainstream, all the early Church Fathers taught –and all Christians NEVER served in the army but instead willingly suffered rather than inflict harm on any other.

The term Christianity was not coined until three decades after Christ walked the earth. Until the day of Paul, followers of Christ were called members of The Way; the way being what Jesus taught!

Jesus Christ was never a Christian, but he was a social justice, radical revolutionary Palestinian devout Jewish road warrior who rose up [intifada in Arabic] and challenged the job security of the Temple authorities by teaching the people they did NOT need to pay the priests for ritual baths or sacrificing livestock to be OK with God; for God already LOVED them just as they were: ‘sinners’, poor, diseased, outcasts, widows, orphans, refugees and prisoners all living under a brutal Military Occupation.

What got Jesus crucified was disturbing the status quo of the Roman Occupying Forces, by teaching the subversive concept that Caesar only had power because God allowed it and that God preferred the humble ‘sinner’, the poor, diseased, outcasts, widows, orphans, refugees and prisoners all living under a Roman Military Occupation above the elite and arrogant!

Two thousand years ago the Cross had NO symbolic religious meaning and was not a piece of jewelry.

“Christ, you know it ain’t easy. You know how hard it can be. The way things are going, they’re gonna crucify me.”-John Lennon

Amen and amen means so be it!