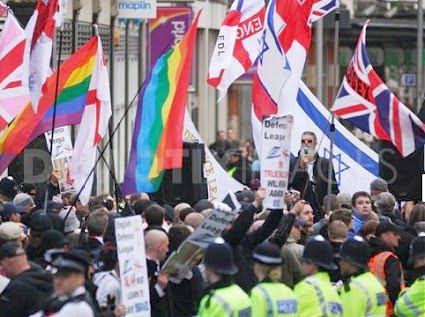 Only Right Wing Jews are allowed to spread  xenophobia and hatred

“It (immigration) was a politically motivated attempt by ministers to transform the fundamental make-up and identity of this country (Britain). It was done to destroy the right of the British people to live in a society defined by a common history, religion, law, language and traditions.”

(Melanie Phillips, as quoted by mass murderer, Anders Breivik, in his manifesto)

Melanie Philips, a rabid Zionist and the author of “Londonistan: How Britain is Creating a Terror State Within” is not happy to be singled out by Andres Breivik in his 1500 pages manuscript.   Are they suggesting that “my writing provoked the mass murder of some 93 Norwegians?” she wonders righteously on her blog. I guess that Phillips knows the answer, as much as she knows how to play with words.

But I will use this opportunity to reiterate it for her, and for the rest of us — there certainly is a clear and strong resemblance between Breivik’s views and Philips’ writing. The most obvious and immediate comparison is that both oppose Islamic immigration and multiculturalism of course, but it goes much further in that both identify the enemy within the ‘left political circuit’.

Breivik cites Philips’ take on Labour’s immigration policy: “It was done to destroy forever what it means to be culturally British and to put another ‘multicultural’ identity in its place.”

I should clearly state here that I do not think that Philips provoked Breivik’s murderous inclination. I also believe that Phillips is fully entitled to express her thoughts and ideas. Yet, it is surely reasonable to suspect that Phillips , amongst others, might have contributed to inspiring Breivik,  ideologically and spiritually.

Though Phillips writes on her blog  that the “the forces of spite, malice and venom (within liberal media) have been unleashed in a terrifying display of irrationality,” it is obvious that it is completely rational to elaborate on the significant resemblance between Phillips’ and Breivik’s ideas.

Jewish media outlets in Israel and around the world are already aware of the deeply worrying fact that Breivik was inspired by right wing ideologies associated with Israel and Zionism.

The JTA (The Global News Service Of The Jewish People) was quick to admit that numerous online postings, including Breivik’s, attack a “mishmash of anti-modern principles” that call for “the deportation of all Muslims from Europe as well as from the West Bank and the Gaza Strip.”

Whether we like it or not, this ‘mishmash’ of ‘global Islamophobia’ and Israeli expansionism is the true face of contemporary Zionism and Israeli ideology.

And yet, there is a further central question that no one in the media has addressed yet: how is it that Melanie Philips is getting away with openly promoting vile Islamophobia in our midst ?

How is it that she and other Zionists prevail , exactly where the EDL and the BNP fail? Why is Melanie Phillips a celebrity, whilst the BNP’s Nick Griffin is regarded as a vile racist, and a social outcast?

Similarly, I find myself wondering what on earth the board of ‘progressive’ Guardian editors had in mind when they nominated the Zionist, pro-war and openly  Islamohopbic Harry’s  Place as one of their favourite political blogs in 2005 —  bear in mind that The Guardian’s nomination was made at more or less the same time that the very same Harry’s Place blog won the  ‘Annual Islamophobia Awards 2006,’ within the UK section of the Islamic Human Rights Commission’s ‘Annual Islamophobia Awards.’

I believe that the answer is devastating: within our so called, liberal democratic, allegedly ‘tolerant’ discourse — it is only right wing Jews who are entitled and allowed to spread  xenophobia and hatred.

This is hardly surprising, because unlike contemporary Westerners, who seem to be more than confused by their colonial heritage  and notions such as nationalism, racism, expansionism, biological determinism, religion, and self-loving, Israel and Zionism actually celebrate all of these  symptoms, in the open.

It is far from surprising then, to see Israeli flags and Jewish symbols popping up in many far right gatherings in the UK and in other European countries, because Israel, it seems, makes racism look kosher.

The shocking ideological resemblance of the thoughts and ideals of the fearsome mass murderer Breivik and mainstream Zionist advocates  such Melanie Phillips, Daniel Pipes, David Horowitz, and Harry’s Place  should surely be a bright red alert for any sensible humanist.

If we want to save our society from being dragged into a violence with no end, we must de-Zionise every possible aspect of our culture, media and political institutions.