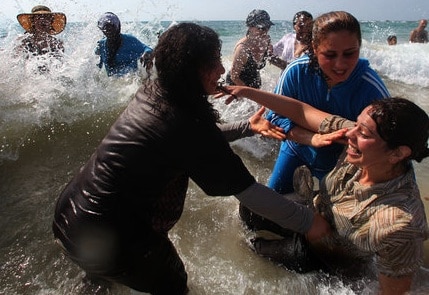 Bronner actually evoked Parks’ name in his report. Did his editors think we would not notice?

Bronner actually evoked Parks’ name in his report. Did his editors think we would not notice?

Blogger Philip Weiss noticed, and he made sure his Mondoweiss readers noticed. By including a brief reference to the iconic moment when Rosa Parks broke the law by sitting in the front of a segregated bus, the New York Times has connected the American civil rights movement to the Palestinian struggle for human rights.

Palestinians living a few miles from the coast reach adulthood without ever seeing or entering the Mediterranean Sea because they live behind a barrier of an occupation of their land that is illegal under international law.

Rosa Parks was 42 years old on December 1, 1955, when she refused to obey bus driver James Blake’s order that she give up her seat to make room for a white passenger. The segregation laws of Montgomery, Alabama, made Rosa Parks a criminal. An African American woman had crossed a barrier and sat in the front of a segregated bus.

Parks knew what she was doing. She was deliberately violating an unjust law when she joined a long line of rebels who sounded the call, “I’m as mad as hell, and I am not going take this anymore”.

That quote is a familiar line from the 1976 movie, Network. In that film, the cry was loud and noisy.  Today, the Palestinian rebellion is being conducted in different venues and in different voices.

In September, at the UN Security Council and General Assembly meetings, the call will go forth in an assembly hall as the Palestinian Authority asks for membership in the UN.

This summer, on the beach at Tel Aviv, different voices sounded. This is how the Times’ Ethan Bronner, describes those voices:

Skittish at first, then wide-eyed with delight, the women and girls entered the sea, smiling, splashing and then joining hands, getting knocked over by the waves, throwing back their heads and ultimately laughing with joy. Most had never seen the sea before.   .     .     .     /

In the grinding rut of Israeli-Palestinian relations — no negotiations, mutual recriminations, growing distance and dehumanization — the illicit trip was a rare event that joined the simplest of pleasures with the most complex of politics. It showed why coexistence here is hard, but also why there are, on both sides, people who refuse to give up on it.

“What we are doing here will not change the situation,” said Hanna Rubinstein, who traveled to Tel Aviv from Haifa to take part. “But it is one more activity to oppose the occupation. One day in the future, people will ask, like they did of the Germans: ‘Did you know?’ And I will be able to say, ‘I knew. And I acted.’ ”

Hanna Rubinstein traveled to Tel Aviv from Haifa to take part in defying her government’s immoral laws. She could no longer remain silent.

Take heed, you United Methodist Conference delegates, and listen up, you inter-faith Presbyterian and Episcopal leaders, the New York Times has granted you permission to consider a simple question: Do you wish to be with “the Germans” who refused to know and who refused to act.  Or, will you join with women like Hanna Rubinstein and say, “I knew. And I acted”.

This Rosa Parks moment on the beach takes its place with those other Palestinian symbolic moments, the flotillas, the flytilla, the BDS movement, the resistance to the Israeli Wall.

According to Bronner, this latest act of defiance against Israel’s apartheid laws began a year ago. A single idea of an Israeli Jewish mother has become “a small, determined movement of civil disobedience”. It unfolded this way:

Ilana Hammerman, a writer, translator and editor, had been spending time in the West Bank learning Arabic when a girl there told her she was desperate to get out, even for a day.

Ms. Hammerman, 66, a widow with a grown son, decided to smuggle her to the beach. The resulting trip, described in an article she wrote for the weekend magazine of the newspaper Haaretz, prompted other Israeli women to invite her to speak, and led to the creation of a group they call We Will Not Obey. It also led a right-wing organization to report her to the police, who summoned her for questioning. . . .

Israeli police have questioned 28 Israeli women who have smuggled in their West Bank guests. Charges against them are pending. So far, none of the Palestinian women and girls have been caught or questioned by the police.

Together these Palestinian and Israeli women and girls are building a relationship in their common rebellion. Some of the Israeli women are high profile, including, for example, Hagit Aharoni, a psychotherapist,  the wife of the celebrity chef Yisrael Aharoni, and a member of the organizing group behind the illegal swim outings.

The beachgoers on this most recent swim-in had dinner on the roof of the Aharonis’ home, five floors above stylish Rothschild Boulevard, where, on the day of the Palestinians trip into Israel, hundreds of tents had been pitched by Israelis angry with the high cost of housing.

Bronner asked Ms. Aharoni about her rebellion. She replied:

For 44 years, we have occupied another country. I am 53, which means most of my life I have been an occupier. I don’t want to be an occupier. I am engaged in an illegal act of disobedience. I am not Rosa Parks, but I admire her, because she had the courage to break a law that was not right.

It takes many people and a great deal of courage and sacrifice to win a revolution. It also takes time, as Palestinians and their allies can testify, but this is one revolution, like the battle for African American civil rights, that will be won because as Martin Luther King, Jr., said so often, “truth crushed to earth will rise again.”

Next up: The September United Nations General Assembly meeting in New York City, where the Palestinian Authority will formally request UN membership, and quite possibly, full statehood status.  The first step will be a request to the Security Council, which has a membership of 15. It is in this body that, even if the PA obtains the necessary majority of 8 votes, the US has announced that it will cast yet another pro-Israel veto.

How certain is it that the US will cast its veto?

My government has been clear all along. The only place where permanent status issues can be resolved, including borders and territory, is in negotiations between the parties — not in international fora [forums] such as the United Nations.

Assuming the virtually certain US veto, the next step for the PA would be to go directly to the 193-member UN General Assembly, which now includes its latest member, South Sudan.  The GA requires a two/thirds vote for a resolution to pass. The PA currently reports that it is close to obtaining that necessary two-thirds majority.

The General Assembly would not be able to grant full membership to the PA because that would require Security Council approval, which a US veto would have prevented. The GA, however, does have the authority to upgrade the current Observer status of the PA.  What a majority vote for an upgrade would accomplish is that it would demonstrate to the world that two-thirds of the member states support PA statehood.

Whatever the outcome of the UN votes, the Palestinian revolution will continue in its steady, symbolic march to freedom. When Rosa Parks refused to move on that Montgomery bus, she acted for freedom. Rosa Parks moments will be repeated again and again, on the beaches of Tel Aviv, in flotillas and flytillas, and in all those other locations, too numerous yet to imagine, and in ways yet to be determined.

The picture above, on the Tel Aviv beach, is by Rina Castelnuovo. It was taken for The New York Times.

ABOUT THE AUTHOR: James Wall is currently a Contributing Editor of The Christian Century magazine, based in Chicago, Illinois.  From 1972 through 1999, he was editor and publisher of the Christian Century magazine.  He has made more than 20 trips to that region as a journalist, during which he covered such events as Anwar Sadat’s 1977 trip to Jerusalem, and the 2006 Palestinian legislative election. He has interviewed, and written about, journalists, religious leaders, political leaders and private citizens in the region.  Jim served for two years on active duty in the US Air Force, and three additional years in the USAF (inactive) reserve. He can be reached at:  [email protected]