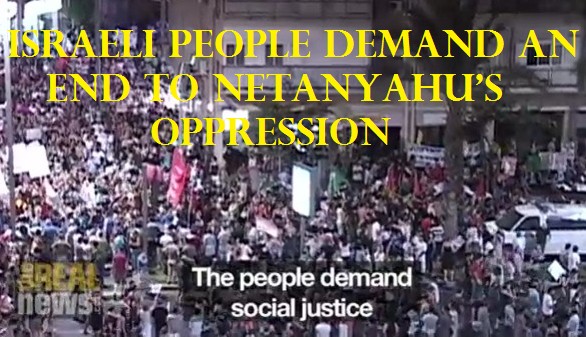 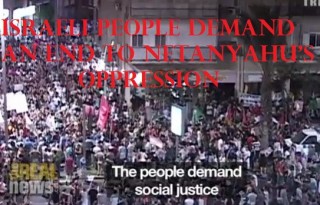 The Israelis, young and old, hitting the streets in numbers reminiscent of Tahir Square in Egypt, don’t really understand why the world is looking at them.  Massive demonstrations are unfolding, initially in Tel Aviv, now across Israel, protesting government failures to provide basic services despite the $30,000 per person Israel receives in “foreign aid” and allowances from the United States.  A nation of professionals, Nobel Prize winners, one of the world’s largest arms exporters, a nation that has imported nearly 1 million “guest workers,” can’t make ends meet, or so it tells its people.

Israelis are tired to hearing their government preach “security” day and night, calling for sacrifices to protect them from the Arab armies planning to drive them into the sea or the new holocaust threatened by the Iranians.

We are now seeing a few, perhaps more than a few getting wise to the tricks that so many Americans fell for after 9/11.

As for Israel’s security:

It goes much further.  Despite clear problems in Lebanon and poor relations with Syria, a government now fighting for its life by brutally attacking its own people, the greatest part of the security threat Israel has droned on about has by little but myth.  The chant of the crowds tells it all, Mubarak, Egypt’s ruler for 30 years has been an Israeli puppet as have the rulers of the Gulf states.  Saudi Arabia has been little more itself, despite occasional rumblings for the sake of misleading fellow Muslims.  The same can be said of Liyba’s Gaddafi, always noises but ready to horse trade with Israel at any time.

The threats have been a tool to propagandize the Israeli people, to exploit and frighten Jews around the world and to refocus attention from the role Israel has seemingly chosen, that of pariah state.

A hundred nations stand ready to support sanctions against Israel for injustices that those protesting inside Israel, the Jews seeing their own victimization, aren’t yet aware of.

The Palestinian people, by rights at least 50% of Israel’s population, were refugees allowed the right of return, another “justice” issue, are more than a security issue, more than competition for land and housing.

They are workers, business owners, tax payers, of the Arab world, the Semitic Palestinians, racially identical to Semitic Jews, are considered the most capable of any group in the Middle East, law, science, medicine, technology.

What has Israel proven, the people of Israel?

This week, the American people have taken a bashing at the hands of their own government, their future “sold down the river” to protect the financial excesses of the ruling class.

The Israeli people, as with the people of Syria, Bahrain, Tunisia, Libya, Egypt and more, have ‘hit the streets’ trying to gain control of their own lives.

Perhaps, as they open their eyes, they will discover friends they never expected.

As with America, Israeli’s face a government drunk on power, flush with cash from arms and drug deals, used to getting its way by staging terror acts on demand.

This is the hard truth of it.

When we see the attacks in Norway, hardly a ‘lone madman’ as is being pressed, when we see Netanyahu offer a settlement on Palestine, we know that what will follow will reflect desperation.