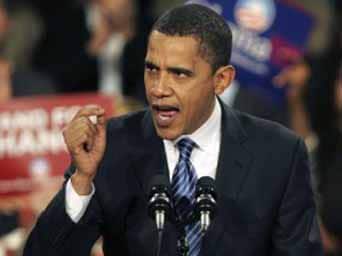 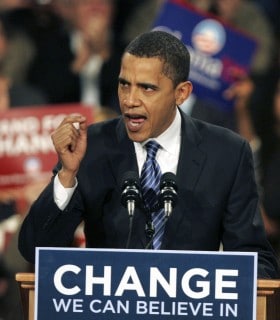 Will The Real President Obama Please, Please Stand up?

.
I’ve been a steadfast Obama supporter every since the very first day he arrived on the political scene, but I must admit, it hasn’t always been easy. First, even as a candidate, he reversed his position on FISA after it was revealed that the Bush administration had been illegally spying on the American people. Then once elected, instead of allowing his attorney general the free hand to hold Bush and Cheney accountable for the war crimes committed in Iraq as prescribed both by law, and his oath of office, he sent the message to his attorney general, and the American people, that we shouldn’t “look back” on the murder of close to a million people.
Then, instead of giving us the change that we could believe in that he promised during the campaign, he’s allowed the Republican Party to frame a completely false political debate which has given them free rein to hold the American people hostage and keep us in absolute misery. And while all this is going on, the only word coming out of his mouth is “compromise.”
Many of my fellow Obama supporters contend that the president can only do so much, which is absolutely true. But what he can do is use the bully pulpit of the presidency to educate the people, which he’s failing miserably at. The entire GOP agenda is based on flat-out lies, the blatant corruption of facts, and a deviation from reality that’s so severe that even a child could see it if someone would just take the time to explain it. So why isn’t Obama doing that?

President Obama should have a staff right next door to the oval office that’s dedicated to nothing but poking holes in Republican lies. If the White House had such a staff, John Boehner, Eric Canter, and the rest of the GOP demagogues would be afraid to tell the blatant lies that they’re telling, because they’d know that every time they told a lie, the very next day the entire news cycle would be dedicated to pointing it out.

How much time would it take to demonstrate to the American people that it’s not the rich who create jobs? It’s the poor and middle class who create jobs by buying goods and services. It doesn’t matter how big a tax break you give the rich, they are not going to hire anyone to produce goods unless they have someone to sell them to. Is Gucci going to hire people to produce his handbags if he’s forced to sell them in a homeless shelter? Of course not, because no one in the homeless shelter can afford to buy them. Well, that’s exactly what the GOP is turning America into – a vast homeless shelter.

The American people need to be educated to the fact that the GOP, in collusion with corporations, and I now suspect, the United States government, are purposely keeping unemployment high in order to bring down the standard of living of the American middle class. In the new global economy American corporations are forced to compete with countries who pay their workers less per week than many Americans spend on lunch per day. Thus, the standard of living of the American middle class has become a liability. So the continued high unemployment rate, in spite of record corporate profits, is nothing but a ploy to get the American people accustomed to expecting less for their labor. That’s also why the GOP is engaged in a concerted effort to destroy labor unions.

But it’s not just labor that’s under attack. Every facet of American life is being assaulted. It started with the abolishment of the Fairness Doctrine. That allowed corporations to turn the public airways into a propaganda conduit. Corporations are now allowed to lie to us with impunity and deprived us of all reliable sources of information in the news. And at the same time, the entertainment division of that very same corporate media is telling us what and how we should think, act, and what is and is not acceptable. So it’s turning us into unthinking Stepford children. Thank God for the internet, but I assure you, they’ll be zeroing in on it much more aggressively real soon.

In addition, our schools are being corporatized. If we don’t do something about that soon, in the very near future corporations will be programming our children instead of educating them. We’re currently knee-deep in a class war, and our educational system is being used to solidify and reinforce a new class system. In the very near future, poor and middle-class children will have one of two options – either accept whatever crumbs the corporations decide to throw at them, or become cannon fodder for the military-industrial complex.

Have you noticed that the children of the rich are no longer even expected to fight for this country? So why should they care about the endless wars that we’re engaging in? No one they love is dying, so it’s just a matter of dollars and cents to them.

So the rich don’t pay taxes, and they don’t fight and die for the country. So exactly what is their function in society? I’ll tell you what it is – to sit back like royalty, prosper on our misery, and complain that the grandparents of the people who are dying for the country are too much of a burden on them. That’s it. Then, to promote their interests, the GOP is holding us hostage every chance they get, and saying, ”Let them eat cake” – and the president is talking about balance and compromise? Please!

So yes, there is something that one man can do. The President of the United States can educate America, and thereby, save the American people from utter disaster. Because the one thing that holds this entire conspiracy together is ignorance. Without it, the conspiracy will come tumbling down like a house of cards.

So Mr. President, at this point in our history compromise is the very last thing we need. What we need now is firm, aggressive, and uncompromising leadership.