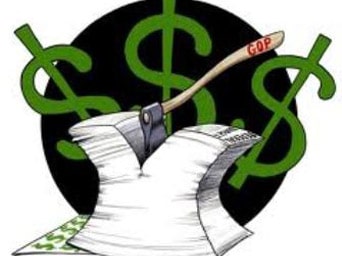 Well it’s happened. The President slithered off to the White House to sign into law the budget deficit compromise which validated a total failure of government. Then Senator Obama himself said on March 20, 2006…

“The fact that we are here today to debate raising America’s debt limit is a sign of leadership failure. It is a sign that the U.S. Government can’t pay its own bills. It is a sign that we now depend on ongoing financial assistance from foreign countries to finance our Government’s reckless fiscal policies. … Increasing America’s debt weakens us domestically and internationally. Leadership means that ‘the buck stops’ here. Instead, Washington is shifting the burden of bad choices today onto the backs of our children and grandchildren. America has a debt problem and a failure of leadership. Americans deserve better.”

…and that was just five short years ago when the deficit was $7.384 billion. Seven debt limit increases in five years have now brought the debt to $14.2 trillion. Between Bush and Obama, malfeasance in office would be the lesser charge one could bring to bear.

The media is running around blaming the entire affair on the Tea Party, calling them “economic Jihadist or terrorists”, because they were so adamant about coming to grips with REALITY. I am not a genius but anyone can see:

“Tax the rich” (defined as income over $250,000 that includes almost all small private sector businesses); Tax the corporate jet owners (there are only about 11,000 corporate jet owners in the whole world); and take all the money from the billionaires…that’s the rhetoric, yet Obama was planning to fly Chicago to celebrate his birthday with those same folks to get money for his 2012 re-election fund. Talk from both sides of the mouth? By the way, if you tax all of the super rich at a rate of 100% (that means take all their income), it still won’t pay the interest on the federal debt!

Many will be upset about even discussing the facts, but the truth is that the government borrows 40¢ of every dollar it spends, and folks, that’s suicide! Spending is the problem and drastic cuts have to be made. If you want to hear it from the horse’s mouth, spend a couple of minutes to watch Dr. Garvin’s YouTube video which has already been seen by nearly one million Americans by going HERE. If you are a veteran, a worker, retired, or are unemployed, every American needs to watch this video.

Dr. Garvin is right…Congressional leaders simply don’t get it. In fact they have tried to elevate their status to nobility when they declare themselves as “career politicians”. The President is absolutely clueless as are the Cabinet members, the Czars, and all the other hangers-on inside the Beltway, who have not one ounce of practical real-life experience. Other than politics, they have never produced a product, never had to make a payroll, never created a commodity, or done much of anything to contribute to society outside the cushy environment of non-accountability called government. Most of those who are not career politicians are “acclaimed academicians”, who have just witnessed abject failure in their Keynesian policies and are now returning to those gloried halls of education to continue teaching their failed policies and theories. It is a perverse situation.

Where do we go from here and how does all this affect the veteran?

As I mentioned in several previous articles, the Defense Department budget which exceeds $700 billion dollars, is right in the center of the periscope and many in Washington want to fire the torpedo. In its defense of expenditures that dwarf the entire military budgets of the rest of the world, the military is willing to put up the veteran as the sacrificial lamb. They can condemn the terrorists all they want for hiding behind innocent women and children to keep from being shot, but is throwing the veteran under the bus any different?

Proposed changes in military veteran benefits include $80 billion in all forms of military compensation and benefits, retirement pay, survivor benefits, the GI Bill for Selective Reservists, and Tricare for Life for older military retirees.

The focus should be on the real cuts that can be made like eliminating new super-weapons systems; military contractor waste, over-charging, and fraud (remember those $600 hammers); base closures; knocking off the concept of the US’s role as global policeman; and ending the wars in the Middle East. My great concepts BUT they will be the last to go given the power of money handed out by the industrial complex that drives our military spending. Now that’s real “corporate welfare”!

The irony of all this moronic thinking is the gall these legislative bozos have in the first place. Any fool by now knows we need to reign-in spending.  Here’s my suggestions:

A farmer understands the need to clean his barn before other tasks are under taken. Why can’t politicians figure it out?

If we could hold the politician’s feet to the fire accomplishing the above they might actually be busy enough to earn their pay check and live up to the commitments made to the military and veterans.

The GIL Master’s Degree curriculum is designed to educate defense and government leaders who seek to lead complex and diverse 21st Century organizations. Successful graduates from the program are able to employ information and information technology for strategic advantage; evaluate the roles, challenges, and opportunities of organizations within the context of homeland, national, and global security; and, apply strategic critical and innovative thinking methods to become Information Age leaders.

A total of 654 students graduated from four NDU colleges at Fort Lesley J. McNair in Washington, DC: the Industral College of the Armed Forces, the College of International Security Affairs, the National War College, and the iCollege. Making the event even more special, the NDU iCollege proudly graduated 20 students with its new Government Information Leadership (GIL) Master of Science Degree. this web site national defense university

Vice Admiral Ann E. Rondeau, President of the National Defense University, welcomed graduates and guests to the ceremony and thanked the NDU faculty “for their unwavering dedication to educating tomorrow’s future leaders.” She recognized several faculty members from the four colleges, including NDU iCollege Professor Cathy Downes for her commitment to integrating cutting edge technology in the classroom.

General James N. Mattis, US Marine Corps, Commander, United States Central Command, was the key note speaker. He told the graduates to be, “100 percent dedicated to excellence, work hard, (expect some blood, sweat, and tears), devote themselves to a strategic perspective, and continue to hone their strategic thinking skills.” Admiral Thad Allen, US Coast Guard (retired), received an honorary Doctor of National Security Affairs degree, Honoris Causa. In his remarks, he advised the graduates that “Critical problem solving will require cognitive diversity; collaboration, networking, and partnering to succeed.” A special guest, Japanese Ambassador to the United States, Ichiro Fujisaki, congratulated the graduates and to offered his thanks to the global community. He said, “We especially owe our gratitude to the American people and the US Military for their vigilant 24/7 support of Japan,” after the horrific March earthquake and tsunami that killed more than 15,000 people. “We are making a comeback,” Ambassador Fujisaki said. web site national defense university

About the College – The NDU iCollege, a U.S. Department of Defense educational institution, prepares leaders to direct the information component of national power by leveraging information and information technology for strategic advantage. Although most students come from DoD (military and civilians), the school also accepts federal agency, private sector, and international students into its graduate programs. Education is focused around CIO, CFO, Information Assurance/Cyber, Enterprise Architecture, IT Project Management, and other information leadership competencies. The NDU iCollege is also currently working with the U.S. Department of Education to obtain approval for its new Government Information Leader Master of Science Degree. Courses are completed on campus and/or online. For more information about the NDU iCollege’s programs, please contact: Jolly Sienda at [email protected] ; or for general information about the college, visit www.ndu.edu/icollege.

The National Defense University is the nation’s premier center for joint professional military education. The university is an accredited graduate-level institution that provides an educational and research environment to prepare future leaders of the armed forces and other civilian agencies for high-level policy, command, and staff responsibilities. For more information about the National Defense University, please contact: Dave Thomas, Public Affairs Officer, at 202-685-3140 or [email protected]; or visit www.ndu.edu.