Home World Mubarak In The Cage For The Wrong Charges 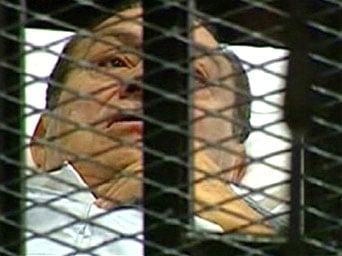 “Mubarak is a sellout, he has betrayed his country and his people and he should have appeared before a supreme court and charged with crimes of high treason”

In Egypt, the land of the pharaohs as it is known around the world, and the nation that has been ruled for almost its entire long history by semi-god kings, caliphs, sultans, khedives and autocratic presidents the appearance of Hosni Mubarak, the lately ousted president in a Cairo court to face criminal charges is undoubtedly a historic event and a precedent that casts an extremely important shadow on the modern history of Egypt and the whole Middle East as well.

This is not an every day event not only in Egypt, but in the whole Arabic and Muslim world.

Political upheavals and opposition to the ruler is something that is unheard of and moreover considered as an outlawed value in the ultra-conservative Islamic jurisprudence, as The Koranic verse clearly states, “O you believers, obey God, obey the prophet and obey those in charge among you”

May be that is one of the reasons, amongst other deeply entrenched negative cultural and social traditions, why Arabic and Muslim nations in particular have amazingly endured for centuries under the tyranny, exploitation and deception of corrupt to the bone colonization and dictatorship disguised under the cloak of religion.

Throughout the centuries all it took for any debauched Caliph or king, who reigned over some Muslim subordinates, to safeguard his throne is to quote some verses of the holy Koran on addressing his people and publicly attend the Friday prayers while holding a copy of the Koran in one hand and a Misbaha –Muslim rosary beads- in the other.

It is so simple a scheme and yet it worked like magic. It is called playing the religious and striking a guaranteed chord amongst the Muslim naïve public opinion.

And that is why Mubarak and his two sons, Gamal and Alaa, stuck to this robust tradition and followed their shrewd lawyer’s advice as they appeared in the courtroom, each clutching a noticeably large copy of Koran. The Mubarak family as they were approaching the end of their corrupt game made sure they struck the same religious chord for the public once again.

The Egyptian revolution is so unique and inspiring yet it entails a lot of hard to grasp contradictions.

The Islamists take over Tahrir Square

Thousands of middle class, internet-savvy and secular youths have planned and courageously sparked this glorious uprising which kept growing bigger and stronger over the memorable 18 days of the Egyptian uprising that led to the stepping down of Mubarak, yet we have lately found the Islamist factions in the country trying to hijack the struggle of those secular and politically cultured youth and drive this Egyptian uprising into the road of the Islamic state.

The whole world is now appalled by the brutality of the Syrian regime in crushing down the protests all over Syria. Well, this was the same appalling situation those secular and brave Egyptian youths faced when they took to the streets and confronted the brutal crack-down of the Egyptian police security forces while calling for change, freedom and social justice.

As the whole world was closely watching the deadly confrontations between the peaceful protesters and the security forces and as the millions were swarming the iconic Tahrir square nobody spotted any Islamist rallies or factions contributing to the demonstrations as if Egypt had none of them … but how could they have participated when their disturbed understanding of Islam forbid them from opposing the ruler- even if he was stinking corrupt.

Last Friday, the same Tahrir square was packed with Islamists, Muslim brothers and Salafists, calling for a Muslim state, as if the predominant majority of the Egyptians didn’t adhere to moderate Islam and ignoring that 20% of the population followed Christianity and as if the nearly one thousand of young Egyptians who died on the streets during the uprising had sacrificed their lives solely for this absurd purpose.

The uprising that started with glorious and inspiring street chants for freedom and equality have disappointingly ended up with Islamist factions crawling out of their hideouts and claiming the right to apply Sharia law and to do away with the secular and democratic government.

History tells us about revolutions, they all start with high hopes and sparkling moments of human will and aspirations for a better tomorrow but it also tells us how they end up in despair, eyes filled with tears and broken dreams.

Why Egyptians wanted the regime down?

The Egyptians revolted against the dictatorship of Mubarak, against decades of watching the country sabotaged and decaying on daily basis, against lack of freedoms and equality, against inadequacy that prevailed from the school classrooms to the police stations and from hospital wards to courtrooms, against negligence that swept through Egypt’s fields, factories and universities.

Egyptians revolted against Mubarak because the land of the abundant river Nile has joined the club of the countries’ most likely to face thirst in the coming decades due to bad management of the river Nile file.

Egyptians ousted Mubarak for he is simply a sellout, a president who violated his presidential oath; he abandoned the country’s strategic interests and instead looked after his own. And those are the charges he was supposed to be facing in court. 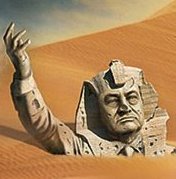 During his reign Egypt has witnessed one of its most incompetent administrations. Mubarak severed Egypt’s relations with its African neighbors following a failed assassination in Ethiopia 1995, neglected the project of the pan-Arabic economical and political unity and cared only to serve the interests of his Zionist friends in Tel Aviv.

During Mubarak’s reign Egypt has considerably lost its pivotal political role on the African, Arabic and Middle-Eastern level.

When you topple a dictator like that and you finally put him on public trial you don’t prosecute him on charges of facilitating the murder of peaceful protesters and accepting bribes in a land-swap deal. … This is simply a joke.

Egypt, during Mubarak’s rule, ranked high, next to corruption, in the world records of end stage renal failure, pediatric cancer, chronic hepatitis C and road accidents as 23ooo Egyptians died on the road every year.

I’m not trying to underestimate the precious lives nearly one thousand youths have willingly sacrificed to gear up this revolution and keep it going but I’m simply stating the fact that those noble and fine young Egyptians died for a bigger cause, they gave their lives away so that Egypt would change and have more freedoms.

Those martyrs of the revolution, as the Egyptians like to call them, wanted to see an end to the corruption and tyranny that nearly crippled and impoverished the country for decades.

And when it is time to put the man, who is primarily responsible for this corruption and tyranny, on trial it makes no sense to charge him with profiteering and illegal land swap deals.

If we are to classify what is currently taking place in Egypt as a revolution, then revolutionary measures and steps need to be promptly and seriously implemented.

Mubarak has betrayed his country and his people and he should have appeared before a supreme court and charged with crimes of high treason. Just like the French people charged Louis XVI and ordered his execution in 1792 before the national convention.

The charges that Mubarak is being prosecuted for is going to be an easy cake for his cunning lawyer, Farid el-Deeb, who very well knew his way around a corrupt judicial ststem and who got his fame by defending the infamous Israeli spy Azzam Azzam back in 1997.

This is definitely going to be a long trial with many surprises Mubarak’s shrewd lawyer has up his sleeve.

What if Mubarak was to be acquitted on the basis of any flawed technicality in the lawsuit or due to lack of concrete evidence? What if he got a lightened sentence with suspended imposition, what would happen then, how could the angry and frustrated people of Egypt be placated? How could the martyrs of freedom be vindicated?

… Yes, the world has witnessed Mubarak in the cage last wednesday but he was charged with absolutely the wrong crimes and appearing definitely before the wrong court.