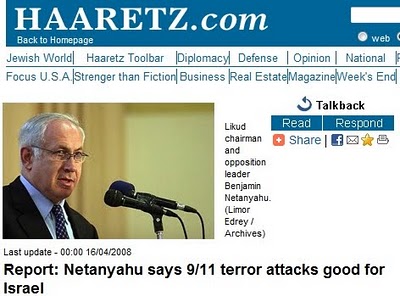 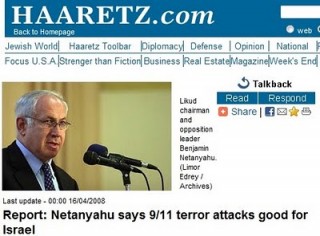 Error is not a typo.  Israel’s terror has been America’s error.

I’ve never been much of a fan of conspiracy theories, though most raise questions that should be answered.

In 2003, I questioned both the official story of 9/11 and several of the conspiracy theories advanced at the time. My concern then was who benefited from 9/11? My conclusion?  Israel.

In January 2010, I repeated the fact that without 9/11, the U.S. had no excuse for invading Afghanistan. That made G W Bush’s “war on terror” with Afghanistan and Iraq (with Iran in his gun sights) even more irrelevant.

The battle against Al-Qaeda and bin Laden was the precursor to the invasion of Iraq; and the trumped up connection between Iraq and Al-Qaeda provided one excuse for invading Iraq.

In an article entitled 9/11 revisited, I summarized 21 questions raised by David Ray Griffin’s book The New Pearl Harbor Revisited. In that work, Griffin pointed out unequivocally that virtually every dimension of the official account of 9/11 was false beyond a reasonable doubt.

Ever since G W Bush proclaimed America’s War on Terror we’ve had reason to question the veracity of many of the wars that have engaged America.

The real evidence of who the terrorists are comes from several studies done on the roles played by Israel from its beginning through six decades to 9/11 and beyond.

A video clip from a British-made documentary from 2002 titled ‘The Age Of Terror’ examines the bombing of the King David Hotel in Jerusalem on 22nd July 1946 by Zionists.

The south wing of the hotel, then occupied by British civil-military authorities, was bombed killing ninety-one people. Twenty-eight of the victims were British, forty-one Arabic, while seventeen were Jewish.

The Zionists who carried-out the attack, known as the Irgun, were led by a future prime minister of Israel, Menachem Begin. The King David Hotel bombing was an act of terrorism widely-considered to be the first real incidence of 20th century terrorism.

Since that time, Zionists with the complicit intelligence gathering and plots of Mossad have engaged in more terrorist acts against Israel’s perceived enemies than those committed by the world’s celebrated terrorists combined.

In January of this year, Washington, DC-based investigative journalist, author and reputed syndicated columnist Wayne Madsen made a revelation that completely discredited the official story of 9/11.

Madsen revealed that “British intelligence reported in February 2002 that the Israeli Mossad ran the Arab hijacker cells that were later blamed by the U.S. government’s 9/11 Commission for carrying out the aerial attacks on the World Trade Center and Pentagon. WMR has received details of the British intelligence report which was suppressed by the government of then-Prime Minister Tony Blair.”

The entire article should be read by all interested in the unveiling of a true conspiracy beyond theory: http://www.opinion-maker.org/2011/01/british-intelligence-reports/.

Madsen concludes his exposure with a comment that connects the terrorism of the 9/11 prime minister-to-be to the entire history of Israel.

“Israeli Finance Minister Binyamin Netanyahu commented on the 9/11 attacks on U.S. television shortly after they occurred. Netanyahu said: ‘It is very good!’

It now appears that Netanyahu, in his zeal, blew Mossad’s cover as the masterminds of 9/11.”

Now, a decade after invading Afghanistan and continuing the costly game of protection for Israel in the Middle East, America is on the verge of bankruptcy.