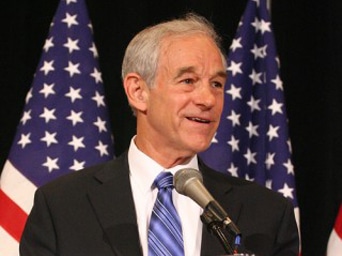 Indeed! Ron Paul deserves far more respect. Why do they fear him ?

Ron Paul, chairman of a major House subcommittee and a man with a significant base of support, deserves far more respect than he is getting from American  Mainstream Media.  He is author of eight books, including the New York Times bestsellers The Revolution: A Manifesto and End The Fed. An advocate of sound money, personal liberty, free markets, and international peace, he is chairman of the FREE Foundation, founder of the Campaign for Liberty, and distinguished counselor to the Ludwig von Mises Institute. In his latest book  Liberty Defined  he shares his perspective on 50 issues ranging from Abortion to Zionism.

But, “the reality” is, that only Bachman, Mitt Romney and Rick Perry are reliable, housebroken kosher pets… Paul is an unbroken renegade and his own unpredictable man with serious ideas, a strong supporter of the Constitution and the First Amendment; a serious threat to everything that contemporary American politics stands for in this day of corruption, graft and grifters.

Rick Santorum might be wrong as ever he could be, or a traitor to his country and his oath as a Representative, and he may be part of the problem but he (and so many others like him) is the real threat to America, not Iran!

Regrettably, as right as Ron Paul may be, he doesn’t stand a chance of being elected or, even if he did,  he hasn’t the insider Washington support to go up against the domineering influences of the Israel Lobby AIPAC and Israeli policy. He would become an even weaker, even more ridiculous President than Barack Obama.

Regardless of designated and delegated authority, the  prevailing  reality is, that the US President would still have to deal and cope with what Jeff Gates, author of Guilt by Association : How Deception and Self-Deceit Took America to War, refers to as “those people in between.”   They are the essential ones who do the heavy lifting, haul water and cutting of the firewood. Without their willing compliance and cooperation, nothing happens.  And, if you push them too hard, they bite back. JFK and his brother pushed too hard.

The bottomline is: Ron Paul does not have kosher sanction. Without this, he will never be considered a “serious” candidate by the ‘candidate makers’ of America and their minions, the MSM.  Until the American people begin to address that situation and until that situation changes, nothing changes. All else is irrelevant!  It is that simple!

Merit, popularity and electability have no place in modern American politics.

Presented below is Ivan Eland’s accurate and on point analysis on the media gatekeepers lack of approbation and  support for  Ron Paul.

It is all a Zoo… a political Zoo… stagecraft smoke and mirrors.  A game!

Although Ron Paul placed second in the Iowa straw poll, behind Michele Bachmann by the slimmest of margins, most media commentators — both left and right — refused to anoint him as one of the “big three” candidates remaining in the Republican presidential contest. Translated, the media gatekeepers, as they did in his 2008 campaign, are telling the American people that Paul should not be regarded as a serious candidate. Apparently, only Bachmann, Mitt Romney, and Rick Perry have somehow earned this exalted designation.

Although the Iowa straw poll does not represent a cross section of the Republican Party, at least some likely voters participated in it. Romney and Perry, both of whom did miserably in the poll, seem to have earned their place in the elite candidates club merely on the basis of media conjecture as to their future viability — based mostly on “political buzz” or fundraising potential.

When candidates are effectively cut out of most media coverage because they are deemed “not serious” or are predicted to have “no chance of winning,” this can become a self-fulfilling prophecy.

Despite his impressive showing in the Iowa poll, Paul is receiving the same ill treatment by the media this go-around as last. An example of media disparagement of Paul’s views could be seen a couple of days earlier in the behavior of Fox’s Chris Wallace, who was moderating the Republican debate. Wallace zeroed in on Paul’s previous statements on Iran and nuclear weapons, including his opposition to sanctions against that country and this remark: “One can understand why they might want to become nuclear capable, if only to defend themselves and to be treated more respectfully.” Wallace asked Paul if his policy was really that President Obama was too tough, not too soft, on Iran.

In responding to Wallace’s question, Paul cast aside the conventional wisdom on U.S. policy vis-à-vis Iran and cogently opined against sanctions, arguing the historically accurate case that they can often lead to war with the sanctioned country — for example, sanctions preceded U.S. wars with Saddam Hussein in Iraq and Manuel Noriega in Panama. Unbelievably (in the eyes of the nearly always sanctimoniously interventionist American media), Paul had the temerity to actually empathize with another country’s feelings of insecurity and to argue for negotiating, even with odious regimes.

Incredulous that he was hearing someone actually say that another country might try to develop nuclear weapons for the same reason that the United States had developed them — to enhance its security — Wallace gave Paul another 15 seconds to explain this seemingly astonishing position, saying, “I just want to make sure I understand. So your policy towards Iran is, if they want to develop a nuclear weapon, that’s their right, no sanctions, no effort to stop them?”

Paul calmly replied that trying to stop Iran from getting a nuclear weapon only makes its feelings of insecurity worse. He added that “we tolerated the Soviets [getting nuclear weapons]; we didn’t attack them. And they were a much greater danger [than Iran] — they were the greatest danger to us in our whole history.” Paul could have added that the United States also declined to bomb the even more radical communist Mao Zedong as he took China into the nuclear club in the 1960s and threatened nuclear war with America. Iran has never made such threats to the United States.

Paul’s yes-to-negotiations-and-no-to-sanctions-and-war-with-Iran position holds up well when all the hype about Iran’s threat to the United States is brushed away and the facts are uncovered:

Thus, Paul’s position on Iran is just one example of his opposition to interventionist and jingoistic U.S. foreign policies — about which the media either is astonished (à la Chris Wallace) or exhibits disdain. Yet the reason Paul has such resonance with a certain segment of the American people, despite the media’s derision, is because those people take the time to go beyond political slogans and conventional wisdom and listen to Paul’s facts, analysis, and cogent explanations of and solutions to policy problems.

Ivan Eland is Senior Fellow and Director of the Center on Peace & Liberty at The Independent Institute. Dr. Eland is a graduate of Iowa State University and received an M.B.A. in applied economics and a Ph.D. in Public Policy from George Washington University. He has been Director of Defense Policy Studies at the Cato Institute, and he spent 15 years working for Congress on national security issues, including stints as an investigator for the House Foreign Affairs Committee and Principal Defense Analyst at the Congressional Budget Office. He also has served as Evaluator-in-Charge (national security and intelligence) for the U.S. General Accounting Office (now the Government Accountability Office), and has testified on the military and financial aspects of NATO expansion before the Senate Foreign Relations Committee, on CIA oversight before the House Government Reform Committee, and on the creation of the Department of Homeland Security before the Senate Judiciary Committee. Dr. Eland is the author of Partitioning for Peace: An Exit Strategy for Iraq, Recarving Rushmore: Ranking the Presidents on Peace, Prosperity, and Liberty, The Empire Has No Clothes: U.S. Foreign Policy Exposed and Putting “Defense” Back into U.S. Defense Policy, as well as The Efficacy of Economic Sanctions as a Foreign Policy Tool. He is a contributor to numerous volumes and the author of 45 in-depth studies on national security issues.

As in the past, only one bill was mailed. It included payment coupons and reply envelopes for both installment payments. First installment amounts shown on tax bills must be paid by Sept. 15, 2007, or taxpayers may pay the entire amount by this date. The second installment is due Nov. 15, 2007. Installments not paid by the stated due dates will incur a five percent (5%) penalty. In addition, interest will begin to accrue at the rate of one percent (1%) per month beginning on Nov. 16.