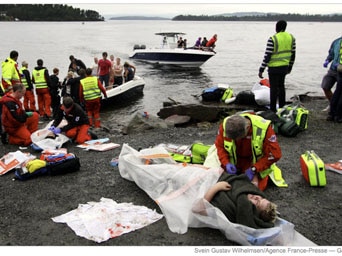 So let us fight together with Israel, with our Zionist brothers against all anti-Zionists….”

War-making storylines tend to lose their steam. Sustained warfare requires more than just a plausible Evil Doer. A credible narrative is also essential. To remind us who to hate, who better than a murderous Nordic Muslim-hater?

Far-fetched? How many Americans had heard of the Taliban before March 2001 when destruction of the ancient Buddhas at Bamiyan was reported worldwide as a ‘Cultural Holocaust’? Voila! An Evil Doer brand emerged and was soon repackaged as Islamo-fascism.

Six months later, an attack on U.S. soil left little doubt that outraged Americans would be provoked to war. Combine an emotionally wrenching mass murder with manipulated intelligence and an invasion was assured—of Iraq. That miscue required sophisticated pre-staging.

Residents of Washington, DC well recall the sniper attacks that left ten dead during the October 2002 lead-up to a Senate vote on a war resolution sponsored by Jewish Zionist Senator Joe Lieberman. Those well-timed murders ensured a heightened sense of insecurity and helped ratchet up the requisite hatred—to invade a nation that played no role in 911.
Remember the Times Square Terrorist? A car belonging to a Muslim was found with two WalMart propane tanks, an alarm clock, a box of fireworks and some fertilizer. When? In May 2010 during the lead-up to a UN vote on a nuclear-free Middle East—opposed by Israel.

To sustain hate requires a sustained stream of plausible reasons to hate. Plus careful maintenance of a ‘generally accepted truth’ that keeps attention focused on a credible threat.

Islamo-phobia was a fresh threat when it first appeared in a 1993 article in Foreign Affairs. Yet it dates from 1990 when Princeton Islamic scholar Bernard Lewis, an avid Zionist, touted “The Roots of Muslim Rage.” By 1996, Harvard Professor Samuel Huntington was ready to publish The Clash of Civilizations and the Remaking of World Order.

With more than 100 nongovernmental organizations promoting The Clash, Americans experienced a seamless segue from an old narrative to a new. Without missing a beat in Pentagon spending, we ended a global Cold War and, by consensus, began a global War on Terrorism. 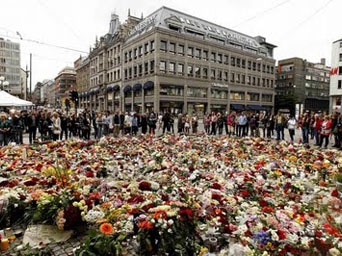 Huntington argued that cultural and religious identities would emerge as the primary source of conflict. To gain traction, The Clash consensus required a series of events that could be plausibly blamed on Muslim Evil Doers. That was 15 years ago—a long time to sustain a storyline.

With Osama bin Laden dead and war-weary Americans nearing the tenth anniversary of 911, The narrative was losing its punch. Plus the storytellers face a transparency problem: Intelligence agencies worldwide have identified pro-Israelis as the common source of the manipulated intelligence that induced the invasion of Iraq.

What’s a Zionist to do? Answer: look to past successes.

Ten days prior to 911, Tel Aviv announced a $1 million grant to Israeli super-spy Jonathan Pollard. Why then? The timing suggests Tel Aviv was signaling its operatives and sayanim (Hebrew for volunteers).

The Norwegian shooter is akin to the narrative-advancing snipers who emerged in the lead-up to the Senate vote authorizing the U.S. military to invade Iraq. In the lead-up to next month’s UN vote on statehood for Palestine, the carnage in Norway freshened up a stale storyline.

This latest mass murder was committed on the 65th anniversary of the bombing of the King David Hotel in Tel Aviv. That mass murder was an operation of the Irgun, Zionist-terrorist predecessors to the Likud Party of today’s Benjamin Netanyahu.

The same night that Israel launched its Six-Day War in June 1967, Irgun operative Mathilde Krim was continuing her torrid affair with President Lyndon Johnson—in the White House. Why then? Because that land grab ensured the roots of the Muslim rage required to shape future events.

Why would a Norwegian Zionist target Norwegians? For the same reason that Irgun Zionist Menachem Begin murdered Jews in the King David Hotel: to advance a narrative.

In September 2000, Likud Prime Minister Ariel Sharon led a provocative march to Jerusalem’s Temple Mount. When, after a year of calm, suicide bombings recommenced, Sharon and Netanyahu warned that only when Americans “feel our pain” would we appreciate their plight. To feel Israel’s pain, they said, would require that America lose 4,500 to 5,000 to terrorism, the initial estimate of those lives lost to a mass murder one year later.

The well-timed operation in Norway turned to mass murder as a means to remake the world order in plain sight. Those complicit specialize in maintaining a storyline that dates from when the medieval Crusades pit Christians against Muslims.

Absent the success of such deceit, we may forget whom to hate.

“The problem is that the rates increase each year so it’s difficult to remember where you are. Just remember the break point for the bracket you’re currently in rather than trying to remember all the brackets,” she said.

“I think a lot of people just have no clue,” he said. “People often say, ‘I didn’t know that’ as I explain how things work.” The two most common rate schedules are for single and married/filing joint taxpayers. The brackets range from 10 percent to 38.6 percent.

Another common mistake, Makar said, is that people forget the brackets are based upon taxable income — not your total income.

“Tax income is your income after your itemized deductions and personal exemptions,” she said. this web site 2012 tax brackets

People also erroneously assume everything is taxed at the same percentage, Doyle said.

“It’s a graduated system. If you’re in the 27 percent bracket, not everything is taxed at that limit. People just can’t assume that what they think is correct. You have to ask questions,” he said.