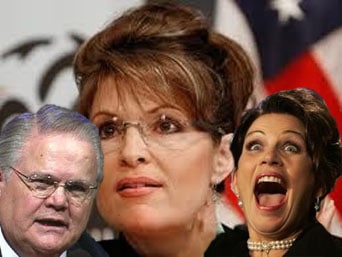 Question for Palin, Bachmann, Hagee, and all “Churchists.”

What took place 1,941 years ago this month (August) that profoundly changed the world, but is seldom, if ever talked about?

CINOs (Christians in name only) are a dime a dozen today. They are the main reason that Israel with full American support continues a brutal occupation of Palestine and wields so much power over our government. CINOs have thrust us into sickening, insane, unchristian wars and national bankruptcy. Thus the reference to Churchianity—not Christianity.

The answer to my question is: in August of 70 AD Rome destroyed Jerusalem, and the Temple, Thereby literally closing out, and fulfilling, the Old Testament era, ushering in a New World order with hope for all humankind of attaining the Spiritual Kingdom of God—not some corrupt earthly kingdom known today as the new world order.

The historical facts of Titus destroying the Jewish Temple puts the lie to Israeli claims as “God’s chosen,” deserving of the Palestinian real estate they stole and now occupy with US complicity.

The Gospels say unequivocally how Jesus foretold in detail the horrendous butchery and raging destruction of Jerusalem when he improbably but accurately predicted nearly 40 years in advance exactly what was going to happen.

“The Destruction of Jerusalem; an absolute and irresistible proof of the divine origin of Christianity” is the title of a book by Peter George Holford published first in 1805 that gives the details as no other book has. (Google author’s name)

Many times in the responses to columns at VT, we have read the contempt for the masses of “idiots” who blindly believe all the propaganda put out by the major media.

“Why cant these idiots see that all the war propaganda is a pack of lies” we cry; or “Why do so many educated and affluent Americans go along with he blind, insane support for Israel? Why are Christians so dumb?”

Oh, aren’t we talking about Michelle Bachmann and the other media “darling” Sarah Palin? Of course we are. I bet that neither of the two popular, programmed empty heads have any idea of the profound significance of 70 AD’s total destruction of Jerusalem so long ago.

Both women are famous churchists. They did not obtain their delusions from public schools. As bad as they are, public schools are not to blame for this twisted indoctrination.

We tend to blame the wrong major force behind the indoctrination’s that have defiled the American dream.
It is our Churches that have deceived us with flawed “Second coming” and “Israel today is God’s plan” teachings. Not the pitiful government schools.

Here is the argument: Schools should teach reading, writing, arithmetic and critical thinking. Preachers should teach the message of Christ’s remarkable advent, passionately and truthfully.

When preachers fail to emphatically pound pulpits about 70AD, they deliberately conceal truth, opening doors to lies, such as those lies found in the Scofield teaching Bible’s dispensationalism. (which dominates seminary training for pastors) 70 AD may be clearly seen as fulfilling the Divine prophecy of Jesus to his discples that the temple and city would be utterly destroyed before that generation passed away.

What is the reason that 70 AD is not preached emphatically in America’s huge and influential “ Churchianity” today?

Christ said he came to fulfull the prophets and the law. Did he? Or did he not? Did Jesus fail? Why must he be seen as “coming again” unless he failed? Who teaches that? Nearly everybody with a pulpit and a flock! (especially those with television access.)

Those preaching and believing the lie of coming again and rapture want an earthly “Messiah/Warrior”of the ilk invented by Talmudists—not “My Kingdom is not of this world.”

Historically among all the influential (well financed, well educated) groups in the world, only the Talmudic Pharisees have utterly denied and denigrated the advent of Christ from the beginning;

And anyone with half a brain can see they use their corrupting powers to continue denigrating Christ viciously today. They hate Christian thinking and they have successfully infiltrated it (Beware the leavening of the Pharisees)

So, who does a message saying that Christ failed benefit?

Certainly, not single-minded Christians. (but churchists, who are so duped that they cry foul about prayer in public schools etc, while blind to the obvious antichristian forces responsible. These dupes are blithely ignorant of the fact 70 AD wiped away the base lie of Judeo Christianity. That particular crediting of the old testament has been “Talmudized” into deceit, but knowledge of 70 AD can nip it.

You, who I directed the opening question to, have thrust your persons and views into the vortex of the public eye in a hugely hyped, Media-driven, political storm, So the question is fair. Have ministers and preachers like John Hagee and the renowned Billy Graham ever emphasized, or even mentioned the importance of 70 AD?

There is a sinister purpose that any “thinking” person can see.

Churches everywhere are definitely not teaching Christ, which is why we have so many “useful idiots” in America today The emotions of a religious education sink it in deeper than the 3 Rs, of public schooling, making the indoctrinations more ingrained.

Israel could not get away with its vile chutzpah without the immense support of the mother of all oxymorons—Christian Zionists.