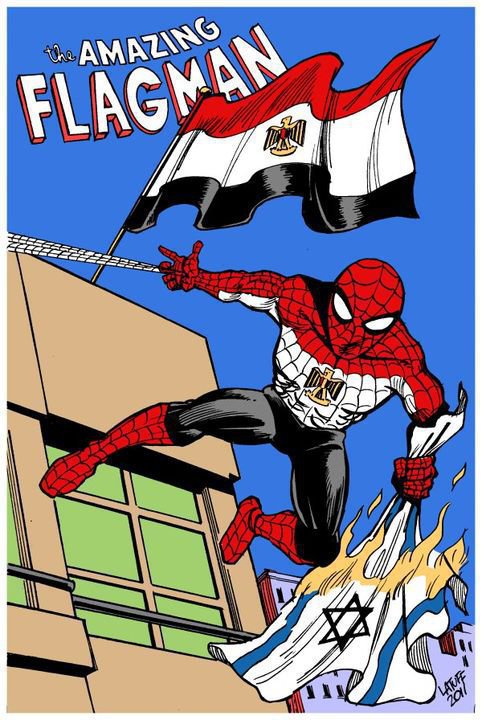 ‘Ahmad A-Shahat says he ‘insisted on climbing on the roof and take down the flag of the Zionist entity because that was one of the goals of the revolution – to depose Mubarak and all his friends, among them the Zionist entity’

“When I went up the steps of the embassy, I thought of the blood of the Egyptian victims,” that was how Ahmad A-Shahat described his “act of heroism,” which won the support of the masses in Egypt – taking down the Israeli flag from  the building (approx. 20 floors) that contains the israeli embassy in Cairo

A-Shahat’s star was quick to rise: “I insisted on climbing on the roof and take down the flag of the Zionist entity because that was one of the goals of the revolution – to depose Mubarak and all his friends, among them the Zionist entity,” he told Al-Jazeera.

“If we want to take down Mubarak, we must take down all his allies and especially the Zionists in Egypt. They had many investments during Mubarak’s era. We must expel them and their investments if we want to eradicate Mubarak’s regime,” A-Shahat said after coming down from the roof. 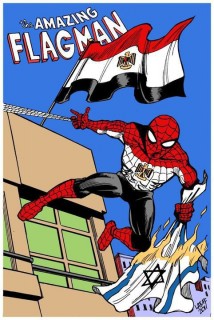 A-Shahat said he had succeeded in climbing on the roof by taking advantage of a swap between the security patrols. As expected, he also became a hit on Facebook and several glorifying fan pages have already been established in his honor.

The incident on the border stirred a diplomatic crisis between Tel Aviv and Cairo. Egypt’s cabinet said on Sunday that an Israeli statement expressing regret for the border deaths was not enough, but it stopped short of saying if it would recall its Tel Aviv envoy.

The song lyrics go as follows:

I’m not a government …I’m not a regime

I’m neither a president … nor a king, surrounded by saluting police officers.

… My son thrown away under the debris

Hit by a treacherous arrow.

I will never say his blood has been sacrificed in vain

Rather, I’m saying he is very much alive

Standing tall and keeping his ground …

In Bethlehem, in Khalil (now Hebron) and in Lebanon

He is standing there … you can hear him saying …

That we will ever relinquish

Our green fields, our blue sea and our sand

Do you know who am I?

I’m the word of all times

The grandest of all is my name

As for what the people were chanting at the end of the video ?

They were reiterating the slogan that has been most popular after the Egyptian uprising that was actually born in Tahrir Square. They were chanting:

“Hold your head up high, for you are an Egyptian.”

Why Veterans Should Consider an MBA Before Starting a Business