Home Life Barbecue For The People 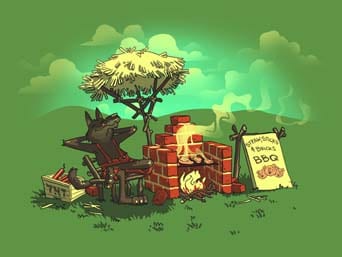 Outdoor cooking has become very popular in recent years with equipment ranging from a foil pan full of charcoal purchased at the dollar store to professional level appliances made by high end companies like Viking, and even custom built wood fired stone pizza ovens imported from Italy.

Aside from these more extreme devices, most outdoor cooking can be classified as either grilling or barbecue.  When most people speak of cooking barbecue, what they really mean is grilling rather than real barbecue.  Grilling is defined as cooking a tender cut of meat such as a steak, chop, or hamburger over a hot fire for a short time.  (Fruit and vegetables can also be grilled, but for now, I will discuss meats.)

In grilling the high heat caramelizes the sugars near the surface and the interior is tender and juicy.  There is much disagreement among barbecue people as to what constitutes “real” barbecue, but most can agree on this basic definition: Barbecue is the slow cooking of tougher cuts of meat using a relatively low heat for a long period of time in the presence of real wood smoke.  This low and slow method of cooking breaks down the tough connective tissues in the meat and if properly done, it comes out tender and moist with a lot of flavor.

The subject of Barbecue is far too large to be covered in one article, so today I will stick to its history and basics.  Cooking over an open fire predates recorded history. Anthropologists tell us that prehistoric man most likely ate meat raw until cooking was discovered.  No one knows how this discovery was made, but two theories have been put forth.  Either of these may or may not be true, or maybe both were true. 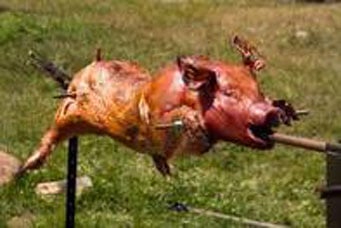 The first states that there was a forest fire which first killed the trapped animals and then cooked their flesh.  When prehistoric peoples ate the cooked meat, they liked the flavor and sought to replicate it by cooking.  The other scenario has them storing their meat too close to a campfire resulting in it being cooked.  Both of these are quite plausible.

Skip ahead a few millennia to the Middle Ages in Europe. (There is nothing special about Europe
as these things took place around the world, but the recorded history we have available here is highly Eurocentric so that is the information I have to work with.) Cooking, for the most part, had moved indoors to the open hearth of the fireplace.  People who had the money to afford it had closed caldrons to hang over the fire and block out the flavor of the smoke.  Smokey meat was for the lower classes and was considered undesirable.

When Columbus landed in the West Indies, he noticed natives cooking on a grate made from
crossed green wooden sticks suspended over an open fire.  On this they would cook the native meats that were available.  They called this contraption “Barbacoa.” Columbus took this word back to Spain and since it sounded similar to barbarian, a term they wanted to associate with the natives, it was adapted. It is believed that the modern word “barbecue” is an American adaption from “barbacoa.”  While in the West Indies, the explorers also released hogs that were not native to the western hemisphere.  They thrived in the new world and would later play a large part in advancing barbecue.

Skip ahead another couple hundred years and we find ourselves in the old plantation south. Along with their agricultural crops, plantations raised many hogs, or more precisely their slaves raised and cared for them.  In the fall, there was usually a celebratory feast where the slaves dug a long pit and built a fire in it. (The place or device where barbecue is cooked is still referred to as a pit.)

They suspended a whole hog high over the fire either on a rack of some sort or on a spit that
could be rotated to cook evenly.  This was a labor intensive project and it took several slaves all day to tend the fire, turn the spit and constantly baste the hog with fruit juices, vinegar and spices 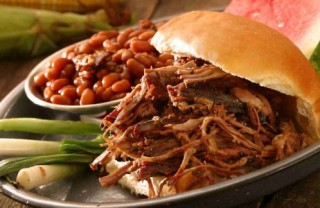 to keep it moist while it cooked. When it was done, the owners, of course, got first choice of the finished meat and they ate “high on the hog” literally. The cuts that run along the back of the hog include the loin and tenderloin and were considered the most desirable.  The paid employees got the next choice moving down the hog and the slaves got what was left which usually included the shanks, trotters, head, and maybe the ribs as they had too much bone to be considered desirable.

Of course, since all of the work was done by the slaves, they were the only people who learned the
proper methods of cooking barbecue, and after the Civil War they used their talents to continue to prepare fine barbecue. Black churches often used open barbecue dinners to attract new members and keep their old ones.  They cooked some whole hogs, but moved more to the lower priced cuts from the hog such as the front shoulder and the ribs.  In those days virtually all of the really good pit masters were African American.

Even today many of the great BBQ cooks who work in the pits of restaurants are African American with their knowledge having been passed down from earlier generations. A friend of mine who lives in the south tells me that when he was young, the only place to get real Barbecue was to go to the black neighborhood and buy it there. In a strange twist of the segregation that was in force then, he could only buy barbecue to take out; he was not permitted to sit in the black restaurant. The irony does not escape him.

Until relatively recently, real barbecue was strictly a southern phenomenon, with several distinct styles being developed.  In the East, centering around the Carolinas, the meat of choice is whole hog or pork shoulder.  The finished meat is

chopped or shredded and is often served with a thin vinegar based sauce.  In east NC, the sauce is very simple consisting of vinegar and

hot pepper flakes. Other seasonings may be added, but that is the basis and no tomato is used. In west NC, tomato puree is added to the vinegar and spice mix. 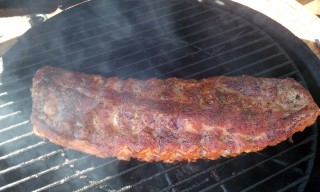 In Tennessee, centering around Memphis, ribs are the meat of choice.  There are two basic styles of Memphis ribs, dry and wet.  Both start with rubbing the raw ribs with a dry rub made up of a usually secret blend of herbs and spices.

They are cooked and the dry are served as they come out of the smoker. The wet ribs are coated with a tomato based finishing sauce that is usually slightly sweet, but with a vinegar twang to it.  They are put back into the pit to caramelize the sauce or are finished on a grill.

Kansas City was and still is a crossroads for meat distribution.  In the past, most commercially grown meat passed through Kansas City to be distributed around the country.  The system is less centralized now, but still a lot of meat passes through there.  They cook both pork shoulder and ribs, as well as beef brisket.  Their characteristic sauce is thick and sweet.  Most bottles of prepared sauce that you will find in the grocery are KC style.

In Texas, beef and sausages are the kings.  A large portion of central Texas was settled by German immigrants who brought their sausage making skills with them.  They make a huge assortment of sausages many of which end up in someone’s BBQ pit.   Of course the major meat used is beef.  With Texas’ history in the cattle business, it is only natural that they would prefer beef.  A few special events feature barbecuing a side of beef, but usually the two cuts used are shoulder clod and brisket with brisket being by far the most 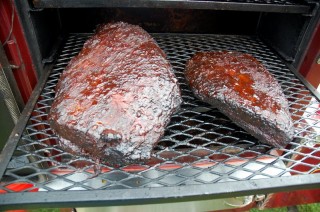 The whole brisket is two tough muscles, the flat and the point, that are located between the front legs of a steer. These muscles are constantly worked and the result is a very tough piece of meat with a lot of connective tissue.

It is the job of the pit master to tenderize the meat and break down the connective tissue without drying the meat out. Most barbecue cooks consider the brisket to be the most difficult piece of meat to cook correctly. I agree, but if you manage to get it right, it is wonderful, a rich moist pure beefy experience. Brisket is usually served without sauce, though it is sometimes served on the side. Texas style sauces tend to be spicy tomato based and medium thick.

With the mixing of cultures around the country, these regional styles tend no longer strictly apply.  You can find all of these styles across the country, though the best examples are still usually in their home areas.  Ethnic differences no longer matter as much and barbecue is being cooked successfully by all races and ethnic groups. I even met an Orthodox Jew who cooked and sold Kosher barbecue. Obviously, he does not serve pork. He even arranged with the builder of his custom pit to only use beef when doing test cooks in it.

Barbecue has expanded into the north and is quickly growing in popularity here. It has even spread to foreign countries and is being prepared and served in Europe but it is still much more popular in the south.

There is one more style often sold as barbecue, but it is not. Many family restaurants and sports bars sell “BBQ ribs” or other meats that have been roasted in the oven or cooked on a gas grill, often with the aid of liquid smoke flavoring.  They are soaked with a sticky sauce and served. This is NOT BARBECUE.  It is FAUX QUE, and should not be mentioned in the same breath as real barbecue.  If someone tries to serve you this abomination, I urge you to look them straight in the eyes and say, ’FAUX QUE.”