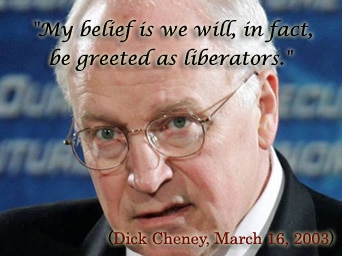 Here are some Pollyanna quotes and lies from the hoodwinked mainstream media as well as Dick (Darth Vader) Cheney, regarding the Iraq war, which deserve to be reviewed and remembered in light of the release next week of Cheney’s memoir ~ In My Time

In light of the release next week of Dick Cheney’s memoir, In My Time, we must never forget that Cheney tried to justify illegally attacking Iraq on March 20, 2003 by using intelligence that the Chair of the Senate Intelligence Committee later labeled “unsubstantiated, contradicted, or even non-existent.”

Here’s a great example of this unindicted scoundrel at work ~ “Simply stated, there is no doubt that Saddam Hussein now has weapons of mass destruction. There is no doubt he is amassing them to use against our friends, against our allies, and against us.”   (August 26, 2002, Cheney speech in Nashville, Tenn)

And my all time Cheney favorites ~

And do not ever forget the Iraq War’s Pollyanna pundits who were totally sucked into Bush and Cheney’s illegal war and occupation of Iraq ~  here are two of my favorite quotes from an enclosed list of Iraq war punditry ;

“He looked like an alternatively commander in chief, rock star, movie star, and one of the guys.”
(CNN’s Lou Dobbs, on Bush’s ‘Mission Accomplished’ speech from the Deck of the USS Abraham Lincoln anchored off of San Diego 5/1/03)

“Congress returns to Washington this week to a world very different from the one members left two weeks ago. The war in Iraq is essentially over and domestic issues are regaining attention.”
(NPR’s Bob Edwards, 4/28/03)

“The only people who think this wasn’t a victory are Upper Westside liberals, and a few people here in Washington.”
(Charles Krauthammer, Inside Washington, WUSA-TV, 4/19/03)

“We had controversial wars that divided the country. This war united the country and brought the military back.”
(Newsweek’s Howard Fineman–MSNBC, 5/7/03)

“Oh, it was breathtaking. I mean I was almost starting to think that we had become inured to everything that we’d seen of this war over the past three weeks; all this sort of saturation. And finally, when we saw that it was such a just true, genuine expression. It was reminiscent, I think, of the fall of the Berlin Wall. And just sort of that pure emotional expression, not choreographed, not stage-managed, the way so many things these days seem to be. Really breathtaking.”
(Washington Post reporter Ceci Connolly, appearing on Fox News Channel on 4/9/03, discussing the pulling down of a Saddam Hussein statue in Baghdad, an event later revealed to have been a stage-managed U.S. military PSYOPS operation–Los Angeles Times, 7/3/04)

“He looked like an alternatively commander in chief, rock star, movie star, and one of the guys.”
(CNN’s Lou Dobbs, on Bush’s ‘Mission Accomplished’ speech, 5/1/03)

“Why don’t the damn Democrats give the president his day? He won today. He did well today.”
(MSNBC’s Chris Matthews, 4/9/03)

“What’s he going to talk about a year from now, the fact that the war went too well and it’s over? I mean, don’t these things sort of lose their–Isn’t there a fresh date on some of these debate points?”
(MSNBC’s Chris Matthews, speaking about Howard Dean–4/9/03)

“If image is everything, how can the Democratic presidential hopefuls compete with a president fresh from a war victory?”
(CNN’s Judy Woodruff, 5/5/03)

“Now that the war in Iraq is all but over, should the people in Hollywood who opposed the president admit they were wrong?”
(Fox News Channel’s Alan Colmes, 4/25/03)

“I doubt that the journalists at the New York Times and NPR or at ABC or at CNN are going to ever admit just how wrong their negative pronouncements were over the past four weeks.”
(MSNBC’s Joe Scarborough, 4/9/03)

“This has been a tough war for commentators on the American left. To hope for defeat meant cheering for Saddam Hussein. To hope for victory meant cheering for President Bush. The toppling of Mr. Hussein, or at least a statue of him, has made their arguments even harder to defend. Liberal writers for ideologically driven magazines like The Nation and for less overtly political ones like The New Yorker did not predict a defeat, but the terrible consequences many warned of have not happened. Now liberal commentators must address the victory at hand and confront an ascendant conservative juggernaut that asserts United States might can set the world right.”
(New York Times reporter David Carr, 4/16/03)

“This will be no war — there will be a fairly brief and ruthless military intervention…. The president will give an order. [The attack] will be rapid, accurate and dazzling…. It will be greeted by the majority of the Iraqi people as an emancipation. And I say, bring it on.”
(Christopher Hitchens, in a 1/28/03 debate– cited in the Observer, 3/30/03)

“I will bet you the best dinner in the gaslight district of San Diego that military action will not last more than a week. Are you willing to take that wager?”
(Fox News Channel’s Bill O’Reilly, 1/29/03)

“It won’t take weeks. You know that, professor. Our military machine will crush Iraq in a matter of days and there’s no question that it will.”
(Fox News Channel’s Bill O’Reilly, 2/10/03)

“He [Saddam Hussein] actually thought that he could stop us and win the debate worldwide. But he didn’t–he didn’t bargain on a two- or three week war. I actually thought it would be less than two weeks.”
(NBC reporter Fred Francis, Chris Matthews Show, 4/13/03)

NPR’s Mara Liasson: “ Where there was a debate about whether or not Iraq had these weapons of mass destruction and whether we can find it…”

Brit Hume: “No, there wasn’t. Nobody seriously argued that he didn’t have them beforehand. Nobody.”
(Fox News Channel, April 6, 2003)

“Speaking to the U.N. Security Council last week, Secretary of State Colin Powell made so strong a case that Iraqi dictator Saddam Hussein is in material breach of U.N. resolutions that only the duped, the dumb and the desperate could ignore it.”
(Cal Thomas, syndicated column, 2/12/03)

This video was recorded very early in the Iraq War with Howard Zinn ~ Hard truths and how Americans have been shielded from them.

So there you have it ~ Dick Cheney was and continues to be the great deceiver but as Machiavelli wrote,” One who deceives will always find those who allow themselves to be deceived” and the mainstream press has been more than willing to perpetuate these deceptions and delay, if not bury, the truth.

Cheney also defiantly promised on NBC news that “there are gonna be heads exploding all over Washington,’’ after people read his book ~ but I predict that eyes will be rolling ~ for Cheney’s self serving book, co-authored by his daughter, is still masking an obvious truth. Cheney purposely lied and is still lying about Iraq in order to obscure his role in the Mossad/CIA 9/11 neo-con false flag operation as well as his on going efforts to still shift that blame to Bin Laden, Al-Qaeda and eventually Iraq in order to protect himself and key members of the Bush administration who would most certainly be implicated and indicted if properly investigated.

Take the time to watch this brief 4 minute interview on  NBC News ~ Cheney’s denial and rigid arrogance is almost breathtaking ~ particularly when justifying water boarding and torture to his interviewer. He is obviously convinced he is a patriot and his book, according to NY Times reviewer, Michiko Kakutani  is “mostly a predictable mix of spin, stonewalling, score settling and highly selective reminiscences.”  See full review ~

And why was Cheney the earliest and strongest advocate of torture and water boarding? Cheney was determined to use any means possible to obtain forced confessions for the so called 9/11 terrorist Attack ~ which will eventually be seen, hopefully in Cheney’s time, as a neo-con inspired CIA/Mossad assisted and treasonous controlled demolition false flag operation.

It is not necessary to bury the truth.
It is sufficient merely to delay it until nobody cares: Napoleon Bonaparte