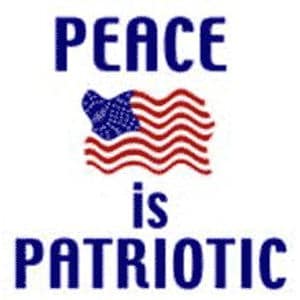 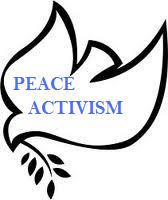 The views expressed in Peace Activism notices, reports, and articles that I post are solely the views of the Peace organization, group, or individual sending the material into VT for posting. Opposing comments will be forwarded to originating Peace Activists.

The below post was sent into VT by Mike Prysner the national coordinator of the young Iraq/Afghanistan Veterans group March Forward!

Veterans organized a historic speak out at Ft. Lewis Army base in Washington state on Aug. 12. The event, organized in less than one week’s time, built upon the hard work that March Forward! has carried out over the past year.

The main goal of the speak out was to challenge the U.S. military’s criminal treatment of troops with PTSD—and to accuse the command at Fort Lewis of murder.

Iraq war veterans traveled all the way from Los Angeles, and linked up with March Forward! members at Ft. Lewis on Aug. 7. We began to prepare for the speak out by continuing the campaign for justice for a fellow soldier, Sgt. Derrick Kirkland, but our efforts turned into much more. 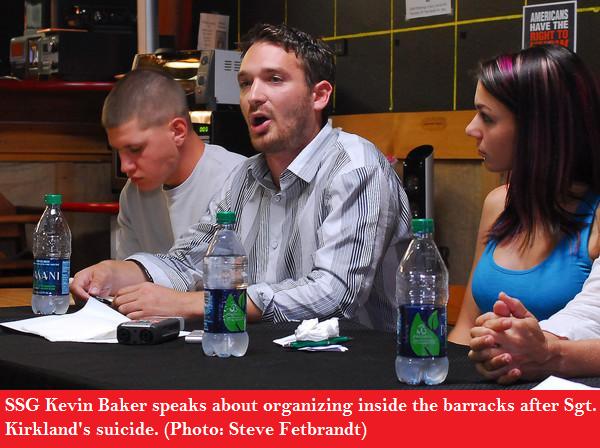 Since March 2010, March Forward! has rallied around the case of Sgt. Kirkland, a two-time Iraq war veteran and infantryman at Ft. Lewis who was rated a “low risk” for suicide after three suicide attempts and pleas for help. He hanged himself after being denied any meaningful treatment, and being publicly humiliated by his superiors for seeking help.

Active-duty March Forward! members in Sgt. Kirkland’s unit, who served with him in Iraq, witnessed the treatment he received, and were in the barracks when he lost his life, began organizing against their own command and the mental health care system at Ft. Lewis.

The Aug. 12 speak out outside Ft. Lewis was a culmination of this work. Sgt. Kirkland’s mother, his fellow soldiers, and other veterans organized this public event to draw attention to the suicide epidemic, challenge the military brass, and give a voice to the thousands of veterans and their families suffering because of the wars and the mental health care crisis.

Organizing the speak out

Spending less than a week organizing outside Ft. Lewis, scores of active-duty troops and recent veterans were brought into the anti-war struggle.

Word got out quickly about the exciting work being done. March Forward! held a press conference announcing the speak out, which was covered widely in the local media. It became a top story on the evening news. One local TV station reported “Soldier’s suicide sparks campaign for change.”

Within the first few days, we met a diverse group of soldiers. Immediately, their responses to the Kirkland campaign were overwhelmingly positive. Every single soldier spoke in complete unison about the broken mental health care system, as well as being fed up with deployments. They all expressed distrust with their chain of command, and highlighted the fact that these wars were and are not worth loosing their lives over. Each soldier expressed that, before meeting March Forward! members, they had no idea organizations like this existed. They were eager to get active.

March Forward! members and new recruits covered the surrounding area with flyers and posters for the speak out. One of those flyers made it into the hands of Ashley Hagemann, a 26-year-old mother of two, whose husband had just lost his life to suicide weeks before.

Her late husband, Staff Sergeant Jared Hagemann, was in 2/75 Ranger Regiment at Ft. Lewis. He had been on eight combat tours, with a ninth on the horizon. After each deployment, he sought help for PTSD. He was rejected each time. By the time his eighth deployment was complete, he was desperate to never to go again. Despite his pleas to the military for help, he was told he had no choice. According to his widow, Ashley, Jared felt had no other option but suicide. He died of a gunshot wound to the head on June 28, 2011. He was one of a shocking 11 suicides in just a few months at Ft. Lewis.

But like Sgt. Kirkland’s case, this suicide became much more than just another number. Finding other military families, joined with soldiers and veterans, gave Ashley a vehicle to fight back, expose those responsible, and join the movement for change that brought so many together at Ft. Lewis in the first place. 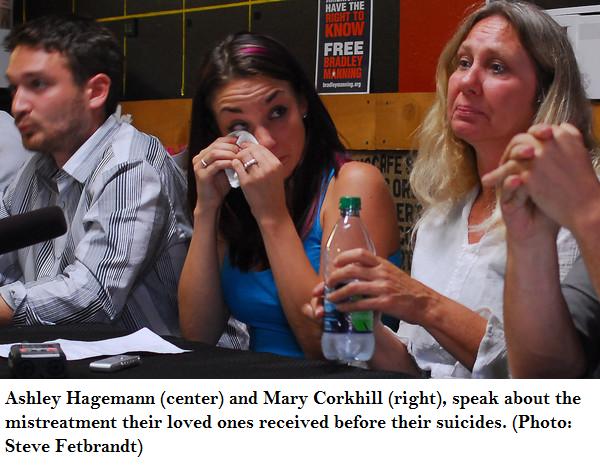 March Forward! made this happen. We exposed the case of SSG Hagemann through the media attention already generated around our work on the Sgt. Kirkland campaign. SSG Jared Hagemann’s tragic death quickly became a national story. Click here to watch the first story breaking the case.

‘The Army is guilty of murder’

The March Forward!-organized speak out was held Aug. 12 at Coffee Strong, a veteran-run, anti-war coffeehouse just outside Ft. Lewis. It was the first event of its kind–active-duty troops, veterans and military families banding together to exert direct pressure on the military brass–since the current U.S. war drive began in 2001; and at a crucial time, with the Army revealing on Aug. 13 that July yielded the most suicides ever in a single month.

Over 80 active-duty soldiers, veterans, military families, and community members turned out to the event. People traveled from all over the Seattle-Tacoma area to attend, including several from as far as Portland, Ore. Several veteran political activists in the crowd told March Forward!: “This is the best political event, we have ever attended.”

The panel itself included Mary Corkhill, Sgt. Kirkland’s mother, Ashley Hagemann and five members of March Forward!, including members of Sgt. Kirkland’s unit, Iraq war veterans and an active-duty soldier stationed at Ft. Lewis. Each told their own personal stories, and each condemned the Army and the U.S. government for throwing away the lives of so many service members.

Ryan Endicott, a Marine Corps veteran who served as infantryman in Iraq and March Forward! organizer, put the mental health crisis in context:

“There is now an epidemic of suicides in the military. For the last two years, more soldiers have died from suicide than from combat. This is a staggering number. This is a major crisis. Something is very wrong… And if this is such a crisis for U.S. troops, imagine the rate of post traumatic stress disorder among the people of Iraq and Afghanistan.”

Mary Corkhill traveled from her home in Indiana to participate in the speak out. “Thank you all for honoring my son by being here. It really, really means a lot to me to know that you guys care.” She went on to describe the long list of deceptions and evasions that have characterized her dealings with the Army over her son’s death, including false claims that he died in combat and that the g 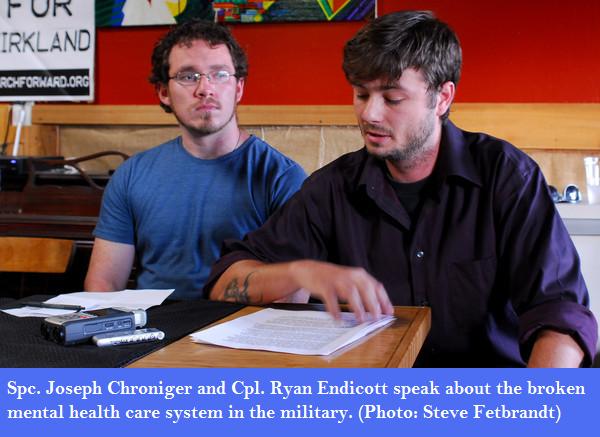 rieving family did not wish to speak with the media.

Fellow soldiers of Sgt. Kirkland exposed their eyewitness accounts of his treatment. A soldier who served in Iraq with Sgt. Kirkland, Joseph Chroniger, said, “They did nothing to help Kirkland, as far as I’m concerned the Army killed my friend.”

Ashley Hagemann gave gripping testimony about here husband’s struggle to get help: “People mocked him. They judged him. They told him to ‘man up. Take a sleeping pill. You’re fine. It’s all in your head.’ No, it wasn’t. … The only thing he had control of was how he ended his own life. For that I blame his chain of command.”

Another of Sgt. Kirkland’s fellow soldiers, Staff Sergeant Kevin Baker, said, “The fact that we are being sent over and over to wars we have no reason to fight, then treated so carelessly when we get home, shows that enlisted soldiers have the right to organize internally, within the military, in our interests.”

Specialist Danny Birmingham, an active-duty soldier on Ft. Lewis, pointed the way forward for active-duty troops. Birmingham recently returned from Iraq, and has set the example to other troops by taking a stand and exercising his right to refuse to take part in these unpopular wars, and became a conscientious objector. “A lot of people that resort to suicide feel that there is no other way out. Being a conscientious objector is an alternative way out. Obviously the military doesn’t want people to know this. Well, I’m going to tell them.”

It was a diverse array of speakers, all accusing the military of murder, and calling on others to join the growing movement of veterans and their families to hold the U.S. government accountable.

The event literally brought the issue of soldier suicides to the military’s doorstep. March Forward! made this happen.

March Forward! was able to show that the military is incapable of handling the crisis that it has created, and the only real way to make change is through the rank-and-file, along with military families.

The speak out and organizing effort at Ft. Lewis was a major step in building the movement for change. We are now planning for more such events in the months ahead.

MARCH FORWARD IS SOLELY RESPONSIBLE FOR THE VIEWS EXPRESSED ABOVE!