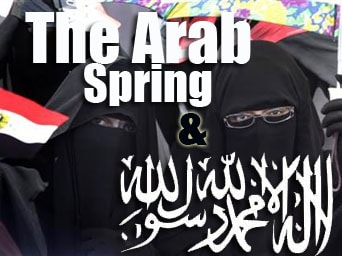 The Arab Spring in Egypt, in Tunisia, in Yemen, in Syria certainly in Libya must be very disappointing to those American and Israeli Zionist NeoCons who took charge of the post September 11th defining Islam and Arabs as born terrorists and defining Islam as the faith of terror.

No group or organizations had more influence or power on how America and the world saw Islam and the Arabs than these American Jewish Zionist groups and organizations and their allies within the American Christian Evangelical groups.

Of course no one benefited from the post September 11th than these groups and organizations that billed themselves as guardians of the Western and American interests, guardians of the Judeo-Christian values and of course they made a killing promoting themselves as “experts” on Arab and Islamic terrorism. They failed miserably at what they set out to do and on the way, they took America and its tax payers to the cleaners, waging their own wars inside and outside America, putting America on the edge and closer to financial and military collapse as they prepare to shift shop to Russian and China utilizing their financial and political powers.

The Arab Spring for sure proved that Alqaeda as promoted and defined by these American Jewish Zionist groups has no impact whatsoever on the Arab street and is insignificant as far as local politics and the needs for reforms are concerned and I am sure the Arab Spring must also be a big disappointment to all of these “security and intelligence experts” within the CIA and National Security Council, within the Israeli Mossad, within the many not so brilliant “think tanks”.

On the happy occasion of Eid El-Fitr Al-Seed, and the end of the Holy Month of Ramadan  I want to wish all of you a Happy and Blessed Eid. The month of Ramadan is a month of fasting, a month of worship and reading of the Holy Quran. A month when people come closer to God/Allah seeking forgiveness for past sins and seeking guidance for the future.

The Holy Month of Ramadan is also a month when feuds and trespasses are forgiven and when people of good will reach out to and embrace each other.

Too bad the criminals and terrorists of Pakistan, Afghanistan and Iraq turned this Holy Month of Ramadan into a month of cold blooded murder, committing acts of terrors against innocent people in mosques, in markets, in public squares.

I never know what kind of a Muslim is someone who strap an explosive belt around his waist, goes to the mosque and detonate himself killing himself and others?

I never know what kind of Muslims are those who recruit such persons pumped them with hate, anger, misguided beliefs and send them to kill themselves and others?

I never know what kind of people are these who commit acts of cold-blooded murder in the name of Allah and in the name of Islam? While not one qualified to say who is a “believer” or not, however if “Heaven” is full of these people, then I am sure hundreds of millions of Muslims around the world including this one, will be willing to forfeit their rights and hope in this “Heaven” full of cold blooded murderers and criminals. 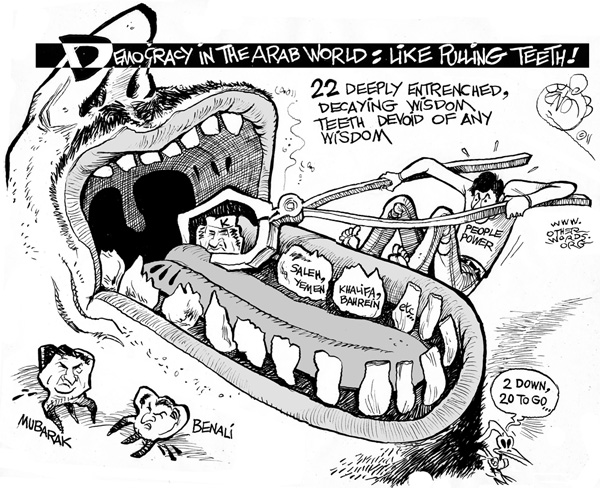 Jihadists and Alqaeda anywhere they never served Islam and in Afghanistan they served American imperialism that recruited them, trained them, funded them and once the invading Soviets were defeated sent them to the home countries to engage in acts of terrorism killing more Muslims on the way to “Heaven”.

Let us not fool ourselves with the rhetoric of these “Salafis and Jihadists” because they are the one serving the enemy of God/Allah and mankind and are true allies with the Zionist NeoCons both Jews and Evangelical Christians.

As we all celebrate the fall and demise of clepto-dicatators, the fall of regimes like those of Bin Ali, Hosni Mubarak, Muamar Gaddafi we continue to hope and pray for the quick demise and fall of criminal regimes in Syria, in Yemen, not to mention the PLO regime of Ramallah and more to come.

The true test of people and nations is not only in how they achieved their freedom, the true test is how they manage their new found freedom and how they build a new nation and institutions where social justice, equality, civil rights and basic freedoms of worship, belief, assembly and speech are guaranteed and where the governments becomes the servant of the people not its master?

We hope the people of Tunisia, of Egypt and of Libya set the stage for a new parameters of freedoms, of liberty, accountability and transparency in the Arab world, and we hope they can build their own secular state with basis of equality and responsibility with separate and independent executive, judicial and legislative powers with tenure limits to avoid corrupting the political process as is the case in the US, and move away from the empty rhetoric of “Arab nationalists” and hollow rhetoric’s of “Islamists” who claim “Islam is the Solution”.