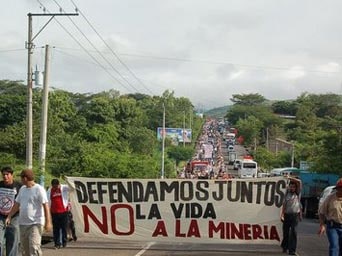 Farmers along the banks of El Salvador’s Lempa River believe tomatoes gleam brighter than gold. They would rather put the river to work for farming, fishing, and drinking than to allow the multinational Vancouver-based Pacific Rim Mining Co. of Canada use the river water to extract the rich veins of gold buried nearby—a process that involves applying toxic cyanide-laced water to separate gold from the surrounding rock.

Area farmers discovered that “only a tiny share of Pacific Rim’s profits would stay in the country, and that the El Dorado mine was projected to have an operational life of only about six years, with many of the promised jobs requiring skills that few local people had,” write Robin Broad and John Cavanagh in the August 18th issue of The Nation magazine. Broad is a professor at American University’s School of International Service and Cavanagh is director of the Institute for Policy Studies, of Washington, D.C.

The Lempa is the water source for more than half of El Salvador’s 6-million people and wends through Honduras and Guatemala as well. In Santa Marta, El Salvador, Broad and Cavanagh write, “citizen groups are building sustainable farming as an alternative economic base to mining. Their goal: a ‘solidarity economy’” centered on the life-giving river to feed and clothe them.

Vidalina Morales, an organizer for the Social and Economic Development Assn.(ADES), told the reporters, “initially, we thought mining was good and it was going to help us out of poverty…through jobs and development.” (The price of an ounce of gold has skyrocketed from $300 a decade ago to more than $1,500 today.)

The Salvadorans changed their views, however. As a study from the International Union for the Conservation of Nature found, area residents “living near mining exploration activities began to notice environmental impacts from the mining exploration—reduced access to water, polluted waters, impacts to agriculture, and health issues.”

Tragically, in the fierce political struggle over the use of the waterway, in June of 2009 community activist Marcelo Rivera was kidnapped, tortured and assassinated by unknown persons and student deejays at ADES broadcaster Radio Victoria, received death threats.

What’s more, two years ago, an activist expectant mother was killed and her two-year-old child wounded in an attack, and lawyers of an anti-mining group were the victims of burglars. One youth told Broad and Cavanagh that he turned down a $30-a-week offer to meet with Pacific Rim representatives to inform on anti-mining activities.

Although some area residents claim Pacific Rim is behind the killings, the mining firm last June 27th denied all. In a statement on its web site it said it was being “libeled and falsely accused of involvement in the horrible murder of Juan Francisco Durán Ayala” and “(we) abhor violence in any form.”

“We condemn the unjust accusations being made against us and point out they are being made by the same opposition leadership who have organized and funded armed invasions of our Santa Rita project, threatened our employees and community supporters, and destroyed our property,” Pacific Rim continued. “To the credit of our people, we have never retaliated against those who have perpetrated violence against us.”

Because the Salvadoran government never approved the firm’s environmental impact study, thus denying it permission to launch actual mining operations, Pacific Rim sued the government for $77 million under the 2005 Central American Free Trade Agreement(CAFTA). This allows corporations to file claims against actions that reduce the value of their investment, The Nation article points out. “The affected farmers and communities are not part of the calculus,” the authors write, and the dispute is liable to go to the International Centre for Settlement of Investment Disputes, housed in the World Bank in Washington.

Pacific Rim’s brief, Broad and Cavanagh write, lays out how the Canadian-based mining firm “first incorporated in the Cayman Islands to escape taxes, then brazenly lobbied Salvadoran officials to shape policies to benefit the firm, and only after that failed, in 2007 reincorporated one of its subsidiaries in the United States to use CAFTA to sue El Salvador.

It appears strange to this writer that a mining firm which in recent years has reported zero income and states that at the end of 2009 its total assets were valued only at $8 million, has had so great an impact in El Salvador where a 2007 poll showed 62 percent of the public opposed mining, as do leaders of the Catholic church and many small business operators.

In a statement on its Web site, Pacific Rim claims that its proposed mine “would be an environmentally responsible operation that would provide hundreds of jobs and economic development to one of the poorest regions of the country. The company notes that dewatering activities in the mine would produce substantial amounts of water, which would be treated to meet international guidelines before being discharged to the Rio San Francisco.”

In the last analysis, the fight over El Salvador’s water resources boils down to a struggle of a foreign mining firm whose extraction goals are opposed by the majority of El Salvador’s people. Is there any question of how this battle should come out?

Sherwood Ross is a Miami-based reporter and public relations consultant who formerly worked as a publicist for the water department of a large U.S. city and has written about water pollution. Reach him at [email protected].