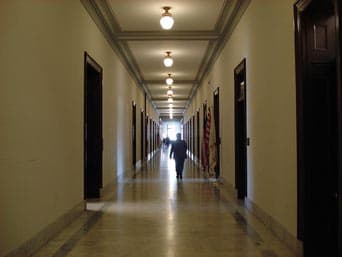 In the mid 90s, my radio outreach was tiny in the scheme of things, and Liberty Lobby’s newspaper, The Spotlight, for whom I toiled, was reviled on Capitol Hill, but I had the time, energy and drive back then to charge into the halls of power, and Lobby for citizens at large and the Constitution, over a period of about six weeks.

I registered as a lobbyist, but had no bribe money to declare. (They do have pretense of making it hard to use cash in lobbying) In about two week’s time, I had strode into virtually every Congressional office in the four outlying buildings that house all the Representatives and Senators. I also made liberal use of the underground rail system, not an easy task to just physically accomplish.

I carried issues of the hated Spotlight with me and left them with each office to introduce myself and this “anti-Semitic” newspaper. My opening went something like this:

“This is the newspaper that tells what the major media wont—for example, we broke the story of the attack on the USS Liberty, back in 1975; are you familiar with the story?”

Usually there would be three or four people in the front to hear my intro, all staff.

One office I burst into in my first rounds, cant remember his name now, New York City democrat, (Ackerman maybe, but not Nadler.) Whose entire staff wore yarmulkes, was not very receptive. One cannot let the aura of power intimidate; all you need to do is realize how little these folks really know; be aggressive, but friendly. I smiled when I brought up the USS Liberty, or the POW issue that was lively back then, or the OKC bombing, which I knew more about than any of them.

Many of the offices flew the black POW flag to announce that they were not totally inept.

“Folks, I represent more of your constituency than you can ever know!”

That line, said for all to hear, was very effective at getting attention, especially in political thought processes, and every office has its political expert staffer.

Were I to find the money, I would merge VT and the American Free Press; after a few firings, the new entity would get down to business where it counts. A crisp tabloid paper and potent Internet presence, plus a team of younger, angry veterans putting boots in the halls of power with a mission—stop the bullshit

One very important thing I learned. Make conversation with security guys, they are regular people, and not as stupid as politicians, then if some office hollers for them, they already know what you’re up to, and they act more responsibly.

Security was never called on me, though I sensed it might happen after an encounter in a Senate elevator with Orrin Hatch.

One of the more memorable encounters was on the underground train during a vote call when Hatch and two others, not as memorable, plunged into a car beside me. The conversation stopped abruptly when I said I was with the Spotlight, and did any of you guys know about the Bilderburgers?

Of course none of this did any real good, but see the possibilities. Few have had the experience.