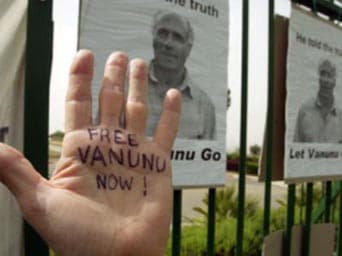 On 7 September 2011, The Scottish Parliament Tabled the Motion:

That the Parliament notes the 25th anniversary of the revelations by Mordechai Vanunu regarding Israel’s secret nuclear weapons programme, which is estimated to number over a hundred warheads with the potential to annihilate the entire Middle East;

Praises what it considers to be Vanunu’s courage and dedication to the cause of the elimination of nuclear weapons; considers that this saw him returned to Israel under suspicious circumstances; further notes that he had been tried for treason and sentenced to 18 years in prison, 11 of which were spent in solitary confinement;

Understands that, since his release, despite being nominated for the Nobel Peace Prize 17 times and holding prestigious positions such as rector of the University of Glasgow, he has experienced continued persecution by the Israeli authorities;

Notes that this has been described by Amnesty International as cruel, inhuman and degrading and has also been condemned by the European Parliament; believes that, rather than be vilified, Vanunu should be allowed to live peacefully in one of the numerous countries to have offered him residence, and is of the view that Israel’s arsenal of nuclear weapons is an obvious barrier in the way of nuclear non-proliferation in the Middle East.

Yesterday, Vanunu also uploaded this video to his You Tube Channel with comment: ” here we can say the beginning of this case in 1987.”

Vanunu Mordechai in court,Trial ,video from 1987, by van