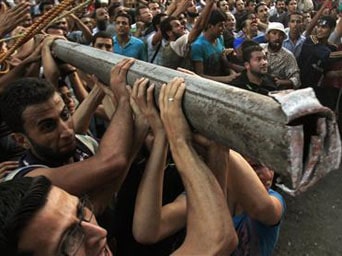 “A security wall erected around the Israeli embassy, a strong reminder of the West Bank barrier, was totally unacceptable in Cairo.”

Last week, in the wake of  public anger over the killing of five Egyptian police officers and soldiers at the borders with Israel who were reported caught up in the crossfire while the Israeli forces were hunting down a group of infiltrators who carried out the Eilat ambush, Cairo witnessed yet another week of popular rage.

The ensuing Egyptian anger targeted the Israeli embassy as thousands of protesters rallied around the embassy for almost a week calling for the expulsion of the ambassador and the whole diplomatic mission.

The Egyptian interim government convened on the night of the border killings and actually released a statement via email to the press stating that the Egyptian ambassador in Tel Aviv has been officially instructed to return to Cairo until further notice.

A few hours later, during which lengthy deliberations between the military council and Esaam Sharaf, the Egyptian prime minister, seemed to have taken place,  and a statement by the spokesman of the prime minister’s office was issued saying that the earlier email should be disregarded since it was mistakenly sent.

This cover up story was hard to digest by the angry Egyptian public opinion and it proved that the prime minister has been out-muscled by Egyptian military generals.

What made things worse and added up to the anger of the Egyptian street is the sudden decision of the care-taker military council to build a cement wall/ barrier around the premises of the Israeli embassy to protect the embassy from any future anti-Israeli rallies.

The erected wall, of 3 meters high; kind of reminded the Egyptians of the Israeli barrier in the west bank, a situation that was totally unacceptable inside the Egyptian capitol.

Friday, September 9 started with a pro-reform rally in Tahrir square but a group of protestors branched off to head towards the embassy, tearing down part of the security wall around the building.

It seems like a group of protesters managed to enter the embassy’s premises, located only on the top floor of a high building in central Cairo as thousands of pages of documents were tossed into the rallying crowd from the Cairo building that houses  the Israel’s embassy. And for the second time in less than two weeks the Israeli flag has been taken down and replaced with the Egyptian flag.

The Egyptian revolutions, like the rest of the Arab spring revolts, is still dominated by the power of the people with no apparent strong leadership lurking in the distance.

Turkey is the only country that has yet managed to gain the respect of most of the Arab peoples, especially after the strong response it showed toward the Israeli arrogance and piracy the whole world witnessed last year when the Israeli commandos attacked the Mavi Marmara ship, part of the Gaza aide flotilla, killing 9 unarmed activists most of them Turkish.

The Turkish diplomacy and its endeavors to win the favor of the angry Arabs who are experiencing one of the most turbulent phases in their modern history is not so hard to notice.

Obviously these conspicuous anti-israeli sentiments in the Arab world will continue to rise adding more to not only the political isolation of Israel in the Middle East, a situation that has recently been worsened by the Turkish-Israeli stand-off, but more seriously to the popular resentment of the Jewish country and its aggressive policies in the region and nothing, in my opinion, seems able to mitigate this anti-Israeli sentiments in the Arab world now, not even the latest statements by Mr. Obama sympathizing with Bibi in his dilemma facing the most fluctuating and unpredictable outcomes of the Arab awakening.

The Israeli prime minister denounced the attack on the embassy as a “serious incident” and a “blatant violation of international norms.” And that in itself was a very interesting statement issued by a bully state whose political core doctrine is primarily based on doing away completely with all of the international norms.

The Turkish Prime Minister, Tayyip Erdogan, is due to arrive in Cairo on Monday to sign military pact with Egypt, after cutting trade ties with Israel and expelling the Israeli ambassador in Istanbul.

At the end of his visit to Cairo Mr. Erdogan is scheduled to make his first official visit to Gaza via the Egyptian border crossing point of Rafah. But the odds of the Turkish Prime Minister to stick to the schedule of his visit amidst the current Egyptian-Isareli rising tension seems unlikely.

With Yitzhak Levanon, the Israeli ambassador who has just arrived from his holiday in Israel but still in the Cairo airport waiting for the situation to calm down or otherwise the instructions to go back to Tel Aviv what are the chances of him bumping into Mr. Erdogan arriving in Cairo airport as he is still waiting for his departure flight.

Well, the chances are zero, for the Israeli ambassador, his family, security and staff have boarded the first Israeli flight heading back to Tel Aviv as I was winding up this update from Cairo in the first hours of Saturday morning of September, 10, 2011.