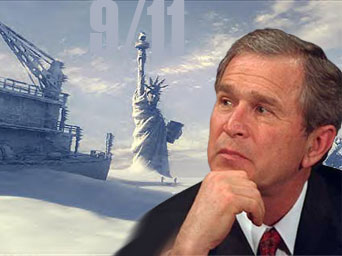 Gutwrenching Memorials, Touching Commentary and Shared Experience Brings US Citizens Together for One Moment

But like Building 7, Freedom and Liberty are Still Forgotten and Ignoring That 800lb Gorilla in the Room Makes Us Look Like Fools at the Trough of Stupidity

Yesterday we memorialized the fallen of 9/11.  It was a sad important day filled with gutwrenching memorials, touching stories, and considerate support for all who empathize.

The NFL had an amazing ceremony before each game with players holding a huge field size flag together in unity with members of the community.  Heck, President Obama visited Ground Zero commemorating the day and held our collective national hand in remberance.  It was a good day for all who suffered that terrible event.

What was NOT featured were the real causes of 9/11 or the millions of people lost due to this global event.  But as my wife says, it would be an inappropriate day to bring that sore subject up while everyday peoples and families mourn the fallen.  She’d be right and so I write this article on Septempber 12, the next day, the day after.

As it stands, the massive loss of life notwithstanding, we are still stuck with the reality that, in hindsight over 10 years, what really happened that terrible day has NEVER been fully explained or investigated backed with evidence and truth.

Instead, we’ve had to endure 10 years of wars, millions dead, and trillions in profits for war propheteers as the US economy ended up in massive debt with millions of lost jobs and opportunity for everyday Americans whilst our freedoms and liberties were mangled beyond recognition.

What is going on?

Well, when one slowly things about it, the winners of 9/11 were the global elite.  They made trillions off the wars and were able to rake in the bucks off the backs of Americans during the wall street rape and pillage.

The losers were the global populations including but not limited to those civilians in Iraq, Afghanistan, Pakistan, and yes, the USA.  In fact, the biggest losers, one may argue, are the U.S. citizenry.  While innocent Iraqi’s and Afghani’s lost millions, their collective societies were NOT swimming in freedom and enjoying liberty.  They were living under oppression.

In the USA, pre-9/11, while the federal government at Foggy Bottom had been encroaching on civil liberties it was being done over many years, slowly, so slowly that most Americans never noticed.  It was a mission creep.  On 9/11, it just became a creep on steroids.  Immediately after 9/11, the global elite rammed through the U.S. Patriot Act destroying any semblance of civil liberty, freedom, making a mockery of the Bill of Rights and U.S. Constitution.  It was game, set, and match.  The days of freedom and liberty were over.

Unfortunately, the U.S. popluation did NOT see it coming and, to this day, most seem not to notice that the government has taken over their freedom and liberty in that the U.S. citizenry now lives at the pleasure of their global government posing as a government of the people by the people.

Clearly, this fall from the liberty freedom tree was the longest fall, the most painful, and sad.

Once the great envy of the world, the USA has been relegated to just another country.  As the representative of the global elite, George W. Bush thumbed his nose at the peoples of the world unilaterally going into Afghanistan and Iraq making money for his assigns while utilizing torture, renditions, and secret prisons at his leisure without criminal consequence.

During this rampage, the American people lost their collective integrity and now have to endure the fact that they own torture and oppression once previously reserved for banana republics and clowns in military dictator suits.

Well, as Americans suffer for their fallen yesterday and the billions worldwide continue to suffer from the global elite rape and pillage, we are left to wonder what the heck happened?  And how did we get here?  And what can we do about it now?

Or maybe, like Building 7 falling after no plane hit it on 9/11, freedom and liberty may be forgotten and no longer discussed as we embrace our idiocracy and continue to live as the farmed livestock on the global elite plantation.