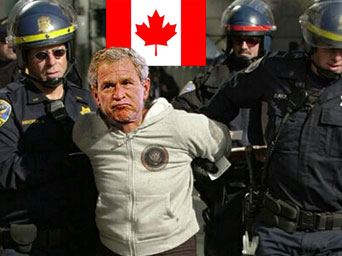 Canada Must Arrest George W. Bush if he Enters Canada

But Lawyers Against the War (LAW) says the Canadian government must either bar Bush at the border because of his alleged involvement in torture and other war crimes and crimes against humanity, or order his arrest when he enters Canada both to ensure he is prosecuted here or elsewhere, and to prevent him from returning to safe haven from prosecution in the United States.

In an August 25 letter to Prime Minister Stephen Harper and the Canadian Ministers of justice, immigration, public safety and foreign affairs, the group says “there is overwhelming evidence that George W. Bush …aided and abetted and counseled the torture of non-Americans at U.S. controlled prisons outside the U.S.”

The 7-page letter cites evidence of complicity in torture (and other crimes) from numerous international reports and authorities, including Bush himself: “In his 2010 memoirs, (Bush) admitted to authorizing the use of interrogation techniques that constitute torture such as water boarding.”

The letter goes on to spell out Canada’s “legal duty to deny safe haven from prosecution to anyone suspected on reasonable grounds of torture committed anywhere against any persons.”  This is a duty owed not just to Canadians but to all humankind. Barring entry is the first way that Canada can comply with this legal duty.

However, once G.W. Bush enters the country, Canada must then act to ensure that George W. Bush is prosecuted for torture (and other crimes) by either prosecuting him in Canada or extraditing him to a country willing and able to prosecute. Canada’s duty to prevent Mr. Bush from having safe haven from prosecution for the many crimes that he stands reasonably accused of, would require Canada to prevent him from returning to the United States.

The August 25/11 letter is signed by Gail Davidson of LAW, and Professor Francis A. Boyle of the University of Illinois College of Law.

Professor Boyle has filed a complaint with the International Criminal Court (ICC) against George W. Bush, Richard Cheney, Donald Rumsfeld, George Tenet, Condoleezza Rice, and Alberto Gonzales for extraordinary renditions, which include torture and enforced disappearances, both crimes under the Rome Statute for the ICC to which Canada is a party.

Although the US is not a party to the Rome Statute, the ICC has jurisdiction to prosecute Bush administration officials for extraordinary renditions carried out in states that are party to the Rome Statute. (See at footnote 9, page 4 of LAW’s August 25th letter, the Council of Europe Parliamentary Assembly, Secret detentions and illegal transfers of detainees involving council of Europe member states).

Professor Boyle’s ICC Complaint played a decisive role in deterring Bush from going to Switzerland in February 2011 because he feared prosecution there.

About the Author: Gail Davidson is an activist for Lawyers against the War. She can be reached via telephone at +1 738 0338 or by email at [email protected]