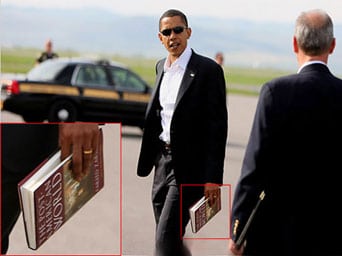 Do We Want an Ignorant President of the United States or an Educated Statesman?

Yesterday, an acquaintance sent me a photo of President Obama holding a book by Fareed Zakaria titled “The Post-American World”.  The inference was that the book was written by a Muslim and therefore Obama is following a Muslim and taking the USA into Islam or whatever non-cents they want to believe.

In reality, Fareed Zakaria is the host of CNN’s flagship international affairs program—Fareed Zakaria GPS, Editor at Large of TIME, a Washington Post columnist, and a New York Times bestselling author.  He was described in 1999 by Esquire Magazine as “the most influential foreign policy adviser of his generation.” In 2010, Foreign Policy named him one of the top 100 global thinkers.

This ridiculous inference is part and parcel of the reinforced ignorance that some in America choose to embrace.

This folk points toward a zillion reasons why Obama should not lead.  But in reality, let’s face it, he’s not part of their tribe and that’s the only darn reason for all the vitriol.  How else to explain birthers and racists?

Of course, there are legitimate reasons to disagree with President Obama and to even elect a new U.S. President.  For example;

Maybe you don’t think his leadership style is adding value to the United States.  Okay!  Or maybe you think his war policies are wayward. Fine!  Or maybe, you think his policies on Medicare, Social Security, and Jobs are not in the best interest of the people.  Sure!  Okay!  We all can agree to disagree on the issues and soon, there will be another election.

But to infer he’s a Muslim because he read a book written by a world-renowned foreign policy expert is just ignorant at best and down-right diabolical at worst.  How silly!

As it stands, this New York Times bestseller, The Post-American World, is where Fareed Zakaria argues that the “rise of the rest” is the great story of our time.  Is it not?

“This is not a book about the decline of America, but rather about the rise of everyone else.” So begins Fareed Zakaria’s important new work on the era we are now entering.

Following on the success of his best-selling The Future of Freedom, Zakaria describes with equal prescience a world in which the United States will no longer dominate the global economy, orchestrate geopolitics, or overwhelm cultures.

He sees the “rise of the rest”—the growth of countries like China, India, Brazil, Russia, and many others—as the great story of our time, and one that will reshape the world.

The tallest buildings, biggest dams, largest-selling movies, and most advanced cell phones are all being built outside the United States.

How should the United States understand and thrive in this rapidly changing international climate? What does it mean to live in a truly global era? Zakaria answers these questions with his customary lucidity, insight, and imagination.

So why wouldn’t any political leaders be interested in the words of such an influential person?  Does it matter if it comes from a Jew, Christian, Muslim, or Pagan?  No, it does not for facts are facts and trends are trends.  And ignoring them is a costly endeavor for any political leader.

And so, actually, I would encourage President Obama and all U.S. leaders to get off the high horse and start competing.  Get knowledge and facts.  Sell us intellect and vision.  Stop filling our populace up with non-cents and myths.  The future of America depends on it.

Since the publication of the first book, the trends he identified have proceeded faster than anyone could have anticipated.

The 2008 financial crisis turned the world upside down, stalling the United States and other advanced economies. Meanwhile emerging markets have surged ahead, coupling their economic growth with pride, nationalism, and a determination to shape their own future.

In this new edition, Zakaria makes sense of this rapidly changing landscape.

With his customary lucidity, insight, and imagination, he draws on lessons from the two great power shifts of the past 500 years—the rise of the Western world and the rise of the United States—to tell us what we can expect from the third shift, the “rise of the rest.”

The great challenge for Britain was economic decline. The challenge for America now is political decline, for as others have grown in importance, the central role of the United States, especially in the ascendant emerging markets, has already begun to shrink.

As Zakaria eloquently argues, Washington needs to begin a serious transformation of its global strategy, moving from its traditional role of dominating hegemon to that of a more pragmatic, honest broker. It must seek to share power, create coalitions, build legitimacy, and define the global agenda—all formidable tasks.

None of this will be easy for the greatest power the world has ever known—the only power that for so long has really mattered.

America stands at a crossroads: In a new global era where the United States no longer dominates the worldwide economy, orchestrates geopolitics, or overwhelms cultures, can the nation continue to thrive?  Can we as a people pretend that we live in a bubble and all of this stuff will just go away?

And so, whether Obama stays on as U.S. President or we elect a new person, can we really afford to be ignorant of what’s going on around us?   Do you really want your children to grow up in such a place?

Education is a good thing.  Ignorance is costly.   I say read on Obama and let’s hope the rest of the leaders who affect the U.S. citizenry are equally up to the challenge.  America needs to step up to the challenge not run and hide from it.