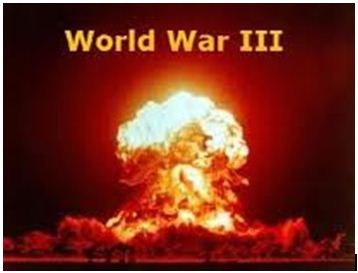 “We are benefiting from one thing, and that is the attack on the Twin Towers and Pentagon. These events swung American public opinion in our favor.” — Ha’aretz, April 16, 2008, Report: Netanyahu says 9/11 terror attacks good for Israel

HOUSTON — Before I am assailed by the usual screams from the usual suspects, let me point out that the fear of Jewish jihadists starting a world war is not uniquely mine. There was an op-ed by Jewish dissident Sefi Rachlevsky in Haaretz Wednesday that said the same thing:

Netanyahu must be stopped from attacking Iran

“Worry over this issue doesn’t stem only from the assurance given by the prime minister’s friend, Dick Cheney, that Israel will attack; or from the messianic statements about a possible attack that Haaretz has recently quoted Netanyahu and Defense Minister Ehud Barak as making in closed forums; or from former Mossad chief Meir Dagan’s warning that an attack will occur in the waning days of September in response to Israel’s increasing international isolation; or from heightened anxiety caused by the imminent closure of the operational window of opportunity.”

Thursday there was an unannounced morning emergency drill at the huge BP refinery in the Port of Houston area, followed by a BP emergency nine hours afterward  In my Friday article, Texas City Terror Scare, Big Oil insiders, speaking on condition of anonymity, said that BP employees were afraid that they were being set up for a false flag attack, and that Israeli intelligence veterans had set up the Texas City counterterror program after 9/11.

My eight years of identifying BP, Texas City as one of the top U.S. false flag terror targets was corroborated by the Thursday publication of US Nuclear Weapons Unaccountable by Wayne Madsen. In it Madsen, like me a former military intelligence officer, identified the Port of Houston as the main conduit for Israeli smuggling of U.S. highly enriched uranium.

Finishing off the week with still more fright, on Friday Denver, the headquarters of much of the U.S. state-of-emergency command apparatus, became alarmingly active: Massive terror exercise planned for metro area..

Taken together, the events and publications cited in this article suggest that the nation may have dodged a bullet late last week, and with the reported Israeli war plans specifying the end of September as the deadline for an attack on Iran, this week will be as dangerous as the last.