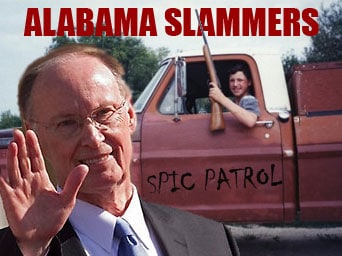 The Road To Ruin Continues It’s March Through Main Street

Beginning Thursday, authorities can question people suspected of being in the country illegally and hold them without bond, and officials can check the immigration status of students in public schools, Gov. Robert Bentley said.

Scanning the comments from average Americans online who post on mainstream media sources, it appears that overwhelmingly Joe Blow American loves this.  Literally, I am thinking it’s a 90% approval rate based on what I’ve read and seen.  The cheers are amazing!

Now don’t get me wrong, I am all for the enforcement of law and yes, the USA has for decades looked the other way when it’s come to enforcing its immigration law.  And that’s wrong on many levels.   But, we the people knew that….we looked the other way!  Yes, you!  I am talking to you!  Do you hear me?  Don’t act like you didn’t know.  You were all for it when you were raking in the bucks and your meal was served by a brown guy in Tecate T-shirt.  So don’t act like you are shocked by all of this.  That’s BS and you know it!

Having outed your hypocritical arce we can now talk and have a meaningful fair and balanced honest discussion.

Okay, so wouldn’t it be a perfect place if the USA enforced its law and had a respectful decent legal foreign worker program that brings the whole thing above the black market?  That would be outstanding.  That would bring everyone out of the dark and into the light and that would be great for the USA.

But sadly that’s not what I am reading from the hang’em high American public.

What I am reading when I take the online pulse of the public is that it collectively wants to enforce its laws, deport millions of people and hang those dirty “illegal” people;  NO talk of any decent legal program to allow work permits to fill the jobs that Americans really don’t want to do or any reasonable decent and humane solution on what to do with the millions of people affected by our public greedy gorge at the trough of convenience. No, in short, screw responsibility let’s just get rid of the brown dirty people and life will be perfect in our tea-partier idealistic fantasy world.

Worse, what really strikes me is the vitriolic tone of so many Americans when it comes to our neighbors to the south.  That’s unbecoming of a successful society and speaks poorly for our future success.  It’s ugly and it hurts!  It’s one step away from Nazi Germany’s attitude in scapegoating members of its population during the 1930s and that’s wrong!

Even more worse is that the USA has been high-jacked and robbed blind by the global elite and the collective populace seems not to have a clue as to why the USA is upside down.  My guess is that we’re so collectively helpless and blinded that we choose to blame the janitor who sweeps the bathrooms at our stores and schools as if he is the thief in the room.  Wow!  This is truly amazing and truly pathetic!

In my view, this is a real case where the majority is so amped up we can’t see the forest from the trees, and thus, it further knocks down the prospects for a hopeful decade to come for the USA.

I actually don’t hold the American public at fault.  The news and information we receive from our mainstream masters is a proven tool for the Oceans Eleven crew who’s robbing us.  So really, what are we to expect?

And that’s the real danger here.  Xenophobia married with force-fed misinformation puts blinders on our eyes making the USA a prime target for continued failure.   I am very concerned.

Clearly, we would NOT be in any economic mess and stupidly blaming the poor undocumented workers for our ills if not for the wholesale robbery that has bankrupted the USA.  These global banksters posing as Americans have stolen our future and not one law in Alabama has been passed to arrest these psychotic predators.  No!  Instead, let’s go after Juan the Dishwasher.  Wow!

My guess is that it’s just too hard to figure out who robbed our collective wallets when they wear invisible ski masks and dress up in fancy suits.  So maybe it’s just easier to blame the lowest man on the line and scapegoat his weak and desperate ass.  That target we can hit right ya’ll?

And so it goes.  We continue on the road to ruin blaming the wrong people for our failures and failing to arrest the traitors who live in our foreclosed houses!

Like Forest Gump said….”stoopid is as stoopid does!”  Bring on the Comments!