Home Government The Whole World Is Watching: Nonviolence at Liberty Plaza — VIDEOS AND... 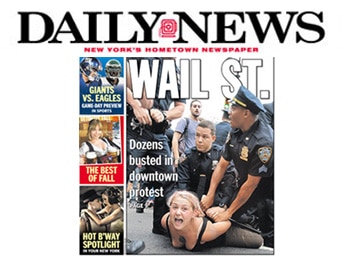 No one should be surprised at overreaction and Police Brutality in a Police State, but in Democratic America ?

This is what Democracy looks like. Three cops to take down and hold one small girl. Big heroes, all of whom deserve a medal for bravery, and performance of hazardous duty.

Punching out and jailing demonstrators will bring down the government as quickly as anything else.

As for Ivan Marovic’s recommendations, yes, by all means organize! “They “are organized, and if you are to confront them, you have to be organized if you expect to get anywhere except in jail or hospital. 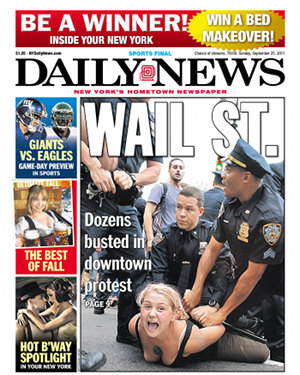 So what occasioned the media’s sudden interest? To what do these protesters, who purport to represent “the 99 percent” of Americans disenfranchised by a corrupt corporate and political elite, owe these headlines?

There have been several arrests each day among those occupying Liberty Plaza/Zuccotti Park in New York’s Financial District, and a certain ritual has developed for when it happens.

At the first sign that police officers are moving in—usually a pack of dark-blue shirts led by one or two in white with a bullhorn—the shouting begins. “Cameras up!” (Everything must be recorded. Among the officers, too, is someone from TARU with a video camera.) Protesters start variously calling out insults at the police and pleas for them to stand down, sending a schizophrenic, even panicked message. But soon, they coalesce into unity with chants, some holding up their fingers in a peace sign. The NYPD motto: “Courtesy! Professionalism! Respect!” A reminder of the cameras: “The Whole World Is Watching!” And, if necessary, simply, “Shame!” Repeat. They remain peaceful to a fault, but loudly and combustibly so.

A terrific storm gathers around the phalanx of police, who shove protesters with hands and sticks, then grab one or two out of the crowd, throw them to the ground, bind their hands in plastic cuffs, and take them away. You can tell who has had nonviolence training before—they go limp, they make no sign of resistance. But others, especially the youngest, will squirm and cry out in pain, inviting the police to push more, hit harder, drag more ruthlessly. There’s the feeling—surely intentional—that anyone could be next. This escalation only reinforces what the police seem to have been told: that what they’re seeing is the beginnings of a riot. And they use it to scare away all-important bystanders. On Wednesday, police made a surprise arrest on the northwest corner of the plaza and dragged the protester, together with a chanting crowd, right past the people gathered along the north edge who had been quietly, intently reading protesters’ signs. It didn’t work in the end—people stayed—but it could have.

On Thursday night, with police massing after a surprise march and several arrests, Liberty Plaza had a visitor: Ivan Marovic of the Serbian resistance movement Otpor!, which helped bring down Slobodan Milosevic in 2000. Joined by Andy Bichlbaum and Mike Bonanno from The Yes Men, he made a speech expressing his solidarity with the occupiers and reminded them that the world is, indeed, watching. Afterward, while talking with some of the occupation’s organizers, he suggested how to take a different approach in encounters with the police.

“Show that you don’t find them personally responsible for what they’re doing, and that you understand the position that the government puts them in,” he said. “Almost feel sorry for them.” That kind of sympathy has been sometimes heard on the plaza and during marches, especially when protesters claim to be fighting for the police themselves and their families. But Marovic also stressed that this takes more than just an attitude—it takes organization. “There needs to be an internal capacity inside the movement that will diffuse these hostile confrontations.”

“When people decide they want to be free… There is nothing that can stop them.” – Archbishop Desmond Tutu

A Force More Powerful explores one of the 20th century’s most important but least understood stories: how nonviolent power has overcome oppression and authoritarian rule all over the world. Narrated by Ben Kingsley, and nominated for an Emmy, A Force More Powerful premiered on ©PBS in September 2000.

I do NOT own the copywrite for this video.

The strength of a civil resistance movement is not, after all, in the loudness of its chants. The NYPD has the manpower and firepower to deal with a few hundred angry protesters, or a few thousand. But a small number of people can make an outsized impact if they reverse the equation, if they render the weapons of the police inert. This is, for instance, how James Lawson and a small cadre of students were able to desegregate Nashville lunch counters thanks to careful training and a staunch refusal to compromise with what they knew was wrong.

The scholar of civil resistance Hardy Merriman suggests that successful popular movements rely on a “trifecta” of qualities: unity, planning and nonviolent discipline. He writes:

The largest risk for a failure of discipline in a nonviolent movement is that some members may become violent. Therefore, nonviolent discipline—the ability of people to remain nonviolent, even in the face of provocations—is often continually instilled in participants. There are practical reasons for this. Violent incidents by members of a movement can dramatically reduce its legitimacy while giving the movement’s opponent an excuse to use repression. Furthermore, a movement that is consistently nonviolent has a far greater chance of appealing to a broad range of potential allies—including even an adversary’s supporters—through the course of its struggle.

Unity, planning and discipline are also interconnected. When the police make arrests at Liberty Plaza, it tends to divide the protesters. Some want to fall back, some want to fight back. Instead, with more discipline, these incidents could unite them and sharpen their focus. Too often, the protesters are letting themselves forget who their real opponent is—all that Wall Street represents in American culture and politics—by focusing so much on anger against the underpaid, working-class police force deployed around them.

Rather than shouting and yelling in officers’ faces, why doesn’t everyone just sit down and be disobedient together? When a march returns to the plaza from a nighttime visit to Wall Street, putting the police on edge with all the excitement, why not greet them with a candlelight vigil? As in the civil rights movement, why not strengthen each other by singing a steady song rather than chanting threats?

The occupation’s Direct Action Committee has already declared its opposition to violence, and that’s a start. The protesters are already, resolutely, not violent. But merely not taking up physical weapons isn’t enough; to oppose a violent adversary, one must learn to wield the alternative weapons of nonviolence.

This, remember, is not passivity that we’re talking about. It’s a different picture of what resistance can look like—a stronger kind, and a kind that will make more and more people want to join the movement. There has been some backfire against police repression already—the widely-circulated videos of violent arrests have only strengthened the occupation—but those videos are also scaring potential participants away. Greater discipline would show the world that the protesters are not merely victims of police abuse, but that they are, in fact, the ones in control, and truly occupying Liberty Plaza, not simply being allowed to stay there.

“If we’re going to get arrested, we should do it on our own terms,” says Jason Ahmadi, an activist from California who has done just that with two arrests on Liberty Plaza in as many days. The first came on Monday when, after watching a woman get apprehended for writing with chalk on the sidewalk, he took up a piece of chalk himself and began writing the word “Love.” The second, on Tuesday, was while holding down a tarp which was protecting media equipment from the rain, and which the police wanted to remove. “I thought everybody would be doing that,” he says—but they weren’t.

Similarly, earlier on Tuesday, protester Justin Wedes was arrested while giving a speech calling on his fellow protesters to have courage. When ordered to put down his bullhorn, he simply continued speaking and was immediately thrown to the ground and cuffed. These moments, even amidst the fear and anxiety that comes with a squad of police entering the plaza, show the occupiers at their best, and they point the way toward being even better.

Nathan Schneider is an editor of Waging Nonviolence. He writes about religion, reason, and violence for publications including The Nation, The New York Times, The Boston Globe, Commonweal, Religion Dispatches, AlterNet, and others.

Or so it seems…. as New York’s finest shut down the Wall Street Encampment. Democracy for the bankers ….. not for the people. Isn’t that what was meant in The Bill of Rights?
CORRECTION >>>
The NYPD didn’t shut it down! It is still there! Lots of people are joining the occupiers today. THERE IS STILL HOPE!