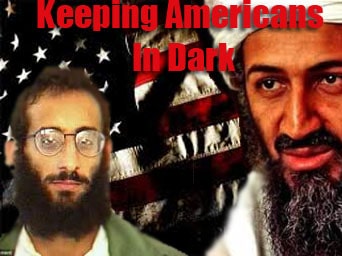 It is hardly surprising that President Obama ordered the assassinations of Osama bin Laden and Anwar al-Awlaki since the last thing he wants is to bring any leader of al-Qaeda to trial. If the U.S. wanted bin Laden to have his day in court it might have had the Navy Seals go against his lightly defended hideout with stun grenades or tear gas instead of launching a shoot-to-kill attack.

As The New Yorker article “Getting bin Laden” of August 8 by reporter Nicholas Schmidle makes clear, the bin Laden slaying was a shoot-and-kill operation from the get-go and “all along, the SEALs had planned to dump bin Laden’s corpse into the sea.”  Schmidle writes that when the SEALs came upon Osama in his three-story compound in Abbottabad that he was unarmed and that those guarding him had already been killed. It would have been the easiest thing in the world to capture him and put him on trial. Instead, by having the SEALs execute him, Obama made good on his 2008 campaign pledge, “We will kill bin Laden” and spared the American public the story of how the U.S. created al-Qaeda in the first place and why and how the terrorist band turned against Washington.

Reporter Schmidle writes the bin Laden slaying was a CIA covert operation, so it was a natural fit for the President. For years a CIA employee, Obama shares the Agency’s criminal outlook, which has long been the expropriation of the energy resources of the Middle East. To further this goal, Obama vastly increased the number of drone assassination terror strikes by the CIA over those ordered by his predecessor George W. Bush, and this escalation has also led, reliable sources inform us, to the killing of hundreds of innocent civilians—a figure that now may well number a thousand or more. I underscore: innocent civilians. Ask yourself, how any civilized man can purchase the destruction of an accused enemy at the price of the murders of so many innocent bystanders, including women and children?

And why no trials? Well, it is hard to think of any aggressorin history who sought to put his foreign captives on trial. As a rule, invaders don’t do that. The U.S. surely hasn’t done this in the Middle East. Of the thousands of “terrorist” captives (and I put the term in quotes because in my book a man is still innocent until proved guilty in court) arrested and held for years in Iraq, Afghanistan, Guantanamo, and other hell holes, how many have been put on trial? How many have had lawyers? How many have had anything resembling due process? How many have been allowed to contact their families? The late entertainer Michael Jackson’s physician currently is on trial in a procedure exposed on nation-wide television—but which captive of the Pentagon allegedly guilty of the grave crime of seeking to destroy America by force and violence has been afforded a like opportunity to defend himself in a public trial?

If there was the slightest shred of justice in the CIA’s renditions, it has been obliterated by the burdens the U.S. has heaped on the several lawyers allowed to represent a handful of the accused, making it difficult for them to visit their clients, to speak to their clients, and to represent them fairly. Worse, the Pentagon has dressed military personnel in civilian suits and sent them to tell captives they are their court-appointed lawyers and can speak to them freely when, in fact, they are spies! And nothing points to American culpability so much as the widespread torture of captives. When, in the annals of human history, has a nation using such foul methods ever been in the right? When has any nation that closets men in secret prisons to deny access to them by the International Red Cross not had something ghastly to hide? When, in all of human history, has any nation that ever outspent all the other nations on the planet combined on armaments not been an aggressor state?

Let’s be clear about this: the nation that arrests suspects without first going before a judge to make its case is no respecter of human rights. Just the opposite. Its violation of international law is precisely what it accuses those it arrests of doing. Al-Awlaki’s slaying by the U.S. “is a real body blow against the United States Constitution by the Obama administration—the murder and assassination of a U.S. citizen in gross violation of the Fifth Amendment,” says Francis Boyle, the distinguished authority on international law at the University of Illinois, Champaign.  This states: “No person shall…be deprived of life, liberty or property without due process of law.”

Instead, Boyle says, this was a “Mafia-style ‘hit'” on a U.S. citizen authorized by President Obama, a graduate of Harvard Law School and former constitutional law professor at the University of Chicago whose action “proves how degraded and bankrupt legal education at such elite institutions has become.” Harvard’s moral bankruptcy, though, is the least of it.

The killing of al-Awlaki is no cause for rejoicing by the American people. Not only has President Obama once again authorized a murder but by denying al-Awlaki any chance of a fair trial Obama cheats the American people of their right to hear what the defendant has to say. One of the great blessings of trial by jury enshrined in centuries of Anglo-Saxon jurisprudence is its educational aspect. There is not only sworn testimony presented by the involved parties but the opportunity to examine and cross-examine witnesses and to get at the motives for their conduct and to determine the truth of their positions. There is the opportunity to hear opening and closing arguments by both the defendant and the prosecution and to evaluate them calmly and weigh them one against the other. In the present situation, the prosecution is trying al-Awlaki, like bin Laden before him, in the compliant media of the American Warfare State.

Boyle charges that as the CIA originally established Al Qaeda to fight in Afghanistan, “they are aware of all the dirty work we have been involved in around the world since about 1980 that we have had them doing, most recently in Libya. Hence, they all get Kangaroo Courts on Gitmo that are under the complete control of the Pentagon to silence and control whatever they have to say as well as their lawyers.” In short, bin Laden and al-Awlaki knew too much.

Finally, just as President Bush’s attacks on Afghanistan and Iraq created a precedent for waging deceitful and illegal “preventive wars,” so, too, has President Obama’s latest assassination established a precedent for the murder of Americans by the White House without jury trial, opening the door to the killing, say, of any president’s political opponents and dissenters. Where Hitler, Mussolini, and Tojo failed miserably, Presidents Bush and Obama have brilliantly succeeded in turning America into a totalitarian state that can execute on a president’s whim. With luck, other peoples and nations will halt the spread of this American empire using creative non-violence rather than the use of force.  The way to fight fire is with water.

Sherwood Ross was active in the civil rights movement and has worked as a reporter for major dailies and as a columnist for several wire services. He currently runs a public relations firm “for good causes” and directs the Anti-War News Service. To contact him or contribute to his news service, [email protected]