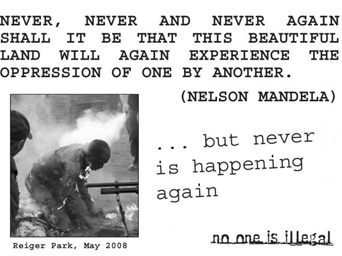 Has anyone noticed that the political air is wafting rancid lately? That is the smell of modern barbarism.

Modern barbarism is a malodorous umbrella concept. Underneath the umbrella are lots of fetid phobias, isms and behaviors: Islamophobia, homophobia, xenophobia, semi-fascism, scapegoating, stereotyping, bullying, libeling and a growing, aggressive intolerance of everything and everyone who is not to the liking of the modern barbarian. Here are some recent instances of this phenomenon.

Part I – Mistaking the Particular for the General

Michael Quigley, a Democratic Congressman from Chicago, made the New York Times on 24 September 2011. He made it by promoting the virtues of tolerance and diversity and lamenting the suffering that occurs when tolerance fails. Out and about in his Chicago district, he stopped in at a meeting of the American Islamic Conference. He made a short speech to the 100 or so conferees during which he said “discrimination comes in many forms, many shapes and many guises. You have my pledge to work with you to fight them, and I think it is appropriate for me to apologize on behalf of this country for the discrimination you face.” Mr. Quigley was correct about the growing levels of Islamophobia that confront Muslim Americans. Islamophobia is a delusional mind-set which mistakes the general for the particular, which condemns an entire group (which happens to have a billion plus members) for the particular actions of a very few. There is no logic to such an overreaching generalization. It is irrational.

Within days of Mr. Quigley’s brief presentation he was “attacked harshly…in the conservative blogosphere…on radio and TV.” There was “at least one death threat on a Fox news site that by week’s end was still not taken down despite requests.” Along with “hundreds of nasty calls, e-mails and faxes” received by Quigley’s office, he was soon lambasted by Bill O’Reilly, again on Fox, who denied that there was anything to apologize for. “What discrimination?” O’Reilly asked. “Statistics don’t support claims of bias against Muslim Americans.” Mr. O’Reilly was simply wrong about this. As Ahmed Rehab, executive director of the Chicago office of the Council on American-Islamic Relations (CAIR) commented, O’Reilly would “have to be living under a rock” to believe there was no evidence. Both federal statistics on work-place complaints of discrimination and a recent report issued by the CAIR in conjunction with the Center for Peace and Gender at the University of California at Berkeley have documented the rise of Islamophobia since the 9/11 attacks.

Despite O’Reilly being factually wrong on the issue of rising prejudice against Muslim Americans, Mr Quigley’s apology continued to draw scorn. Soon some right-wing spokesmen were trying to use the apology to call attention to what they believed to be the violent nature of Muslim culture. Ralph Peters, who might be thought of as a professional anti-Muslim, called Quigley, who is just 51 years old, a “silly old fool” and said you might as well “apologize for preventing them [Muslims] from beating their daughters to death for flirting.” First of all such violence is not a trait of Islam. Secondly, the United States could be made to look like hell on earth for women simply by over-concentrating on nationwide instances of spousal abuse. Such is the danger of mistaking the particular for the general.

At about the same time Islamophobia was also playing havoc with Republican politics in Florida. Nezar Hamze, a long time Republican as well as CAIR’s South Florida Director, was systematically discriminated against (to the point of the purposeful changing of local party selection rules) when he stood for election to the Broward County Republican executive committee. Usually those who want to serve on this committee are automatically accepted. It was “the first time…anyone could recall…[someone being turned down] in a county where Republicans complain about being outnumbered by Democrats.” When Hamze’s membership in the Executive Committee was denied, the 300 or so people present at the meeting “cheered loudly.” Those cheers were strikingly similar to the foot stomping and applauds that have been heard from the audiences attending the Republican presidential primary debates. 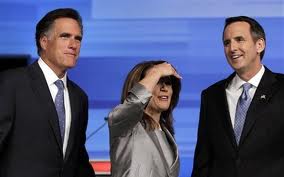 At the Republican debates it is not only Islamophobia that is on display, but rabid reactions to gay rights, scorn for the vulnerability of the uninsured, and calls for the blood of those on death row. To this you can add the following stances that have come to the fore under the influence of a wave of modern barbarism centered in the ranks of the Republican party: Tea Party assertions that environmentalism is “unbiblical” and cutting taxes for the rich is righteous; health care reform is “the equivalent of drug dealing” (Rick Santorum); there is a serious threat of America turning into a “secular atheist country…dominated by radical Islamists” (Newt Gingrich); “those who believe in evolution are part of a cult following” (Michelle Bachman); and the friendly embracing of fundamentalists who believe that the Statue of Liberty is a “demonic idol” (Rick Perry).

Who are these people who give tea a bad name and show up at presidential debates only to behave as if they are enjoying a bear baiting exhibition? Actually, they are Richard Hofstadter’s politically paranoid, Eric Hoffer’s true believers, and Ortega y Gasset’s revolting masses. They are people who are always with us even in the midst of modernity. And they obviously feel that here in America, it is now their time. Maybe they are correct. They have captured one of the two main parties in the U.S., taken at least temporary control of the House of Representatives, and fashioned a slate of Republican presidential hopefuls in their own image. As has been noted, in the midst of the cheering and jeering of these modern barbarians “not one Republican candidate…spoke up to admonish the crowd and call for civility.”

For the rest of America to ignore what is going on here is the equivalent of turning one’s back on a mugging in progress. And what is being mugged is the entire country. Actually, this threat has been building for some time. What do you think Ronald Reagan was doing, in terms of both domestic and foreign policies, if not laying the ground for George Bush Jr. And the Democrats too have done their share to prepare the ground. Bill Clinton helped deregulate the economy to the delight of the devotees of greed and corruption, while simultaneously destroying the lives of millions of Iraqi innocents through draconian sanctions. President Obama has allied with racists in the Middle East and let go free torturers and war criminals in our own midst. Indeed, how many of us, politicians and voters, have turned a blind eye to the repeated bipartisan orgies of blood that sacrificed millions in Vietnam, Iraq and Afghanistan, among other places.

Who are these people? 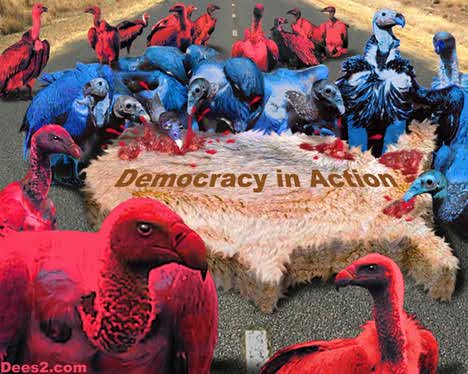 Well, intellectually speaking they are our lumpenproletariat.

The one-dimensional thinkers and political savages that, until recently, had dwelled on the fringes of the conservative movement. However, in another way they are a reflection of all of us and our frustrations with the built in inadequacies of the democratic system. Winston Churchill was right when he said that democracy was the worst political system, except for all the others. The recurrent corruption, constant double standards, favoritism, and influence peddling can get us all down. But what sets the modern barbarians apart is their simple minded intention to essentially dismantle government with nothing but a vague and vengeful minimalism in mind as a replacement. They are, if you will, intimations of our collective political id. So, Dr. Jekyll, meet Mr. Hyde. Who will it be? If you think you really share the character of Dr. Jekyll, then you better assert yourself. Get active, get political, speak out, take a progressive stand. Otherwise, modern barbarism will have its way.