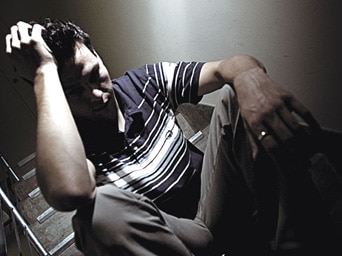 From KGO TV, Sept. 27, 2011 — It is estimated that 20 percent of returning U.S. troops will suffer from Post Traumatic Stress Disorder or major depression. Research on how best to deal with PTSD is critical as those numbers are expected to grow with more troops coming home from Iraq and Afghanistan.

Some new brain imaging research is underway at the Palo Alto VA.

AJ Isom spent nearly a year as a medic, helping clear roadside bombs in one of the most dangerous parts of Afghanistan.

“After the experience, looking back on it, I think all of us are pretty amazed first of all, that everybody came home,” he told ABC7.

That stress led to a diagnosis of PTSD and therapies that have been only partially successful.
“It’s such a roller coast ride. You think you’re in a good place and you’re thrown for a loop,” he said.
To help find a better treatment for himself and fellow Veterans, AJ is allowing researchers to probe his brain. For several hours, he lies inside an MRI, responding to instructions while viewing a series of photographs ranging from benign to disturbing. Next door, technicians track the changes in his brain.

Etkin is heading up the study, a joint effort between Stanford and the Palo Alto VA. The blood flow images allow his team to map the neural pathways involved in regulating emotion.

“As your brain gets more active and works harder, it needs more blood flow, and we can see that on a moment-by-moment basis,” he added.

Once the baseline is established, patients are ready for the second step of the study where they undergo months of standard psychotherapy. As their mental health improves, Etkin’s team will continue to map and remap their brain activity using MRI.

“Trying to get at what the mechanisms are in the brain that underlie the response to psychotherapy and PTSD,” he explained further.

In other words, to understand how the brain is repairing itself and learning to regulate damaging emotions. It is information that could allow doctors to tailor more precise recovery programs, and for Veterans like AJ, perhaps deliver the promise of more effective treatments for PTSD.

“Particularly because the therapeutic stuff drudges up a lot of things and it’s very difficult to talk about, to cope with, to even want to get rid of those, to face those memories,” Isom said.

Researchers are already testing one possible therapy as part of the study. They are hoping to use magnetic stimulation to activate the same neural pathways that are activated by standard psychotherapy, with the goal of possibly duplicating or accelerating the results.

To view the TV