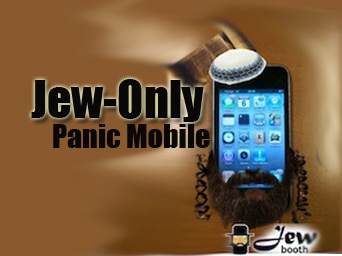 The London Jewish Chronicle reported today that the  ‘Community Security Trust’  (CST) has launched a system to help members of the Jewish community, report ‘anti-Semitic’ incidents direct from their mobile phones.

CST Report is like an “app” for smart-phones. It can be used on any mobile, which has internet access. It is very much like “Angry Birds” yet it is designed to deter the  angry Goyim.

It allows its Jewish users to register where and when an incident took place: the nature of it, a description of what happened and their details.  Because CST Report is designed specifically for mobile use, it allows those who have witnessed an incident to upload a video or pictures from the phone direct to the CST command bunker in Golders Green. I think that this is a refreshing development. It would clearly disable the potential deniers of any future Shoa. With the CST Report at hand, Jews will be able to provide the CST control room with instantaneous reports from the crime scene.

However, I am puzzled by some of the technological aspects to do with this incredible invention. I am, for instance, a Jew by origin, yet I oscillate constantly between being an ‘Ex-Jew’ and a ‘proud self hating Jew’. In those unique moments of self-loathing, as I am embarking onto some universal ethical realisations, should I hit the panic button and report myself to the CST cyber command?  Also, being Jewish by origin, and being subject to constant orchestrated Jewish hate campaigns partially organised by the CST, am I entitled for support of the CST?

Apparently Sheikh Raed Salah was arrested here in the UK in June following a ‘tip off’ that was originated at the CST. Considering Sheikh Salah being far more ‘Semitic’ than the vast majority of British Jewry, could he benefit from such an application installed on his iPhone.

Finally, a suggestion, I honestly think that CST Report is a bit of a cold and  boring  name for such an innovative technology. I honestly believe that iVey, would appeal to a much wider audience among the upbeat Jewish community.