Few people know that Apple founder and icon Jobs, who died on Wednesday at the age of 56 after losing a battle with cancer, originally came from Syria.

“Steve Jobs was Syrian,”  they proudly typed into their Facebook and Twitter pages, sadly acknowledging, however, that had he worked in Syria, he would probably not have achieved any of his innovations.


During the years of French Mandate Syria, Abdulfattah Jandali was born to a large landowning family in the midland town of Homs in 1931. Like most affluent and ambitious Syrians of his generation, he studied at the American University of Beirut before moving to the United States to complete his higher education in the 1950s.

During his teens, Abdulfattah’s cousin, Farhan Jandali, was rising to fame in Syrian political circles, serving as a member of parliament and education minister during the era of Syria’s pre-Ba’ath president, Nazem al-Qudsi.

The Jandalis probably believed that Farhan would be the most member of the family to reach nation-wide fame, if only briefly, in the 1950s and 1960s. That was until Abdulfattah had his first child – born out of wedlock – in 1955. This baby boy, little would he know, would become a legend of the 20th and 21st centuries combined. His name was Steve Jobs – or as many Syrians would love to call him, Steve Jandali.

Few people know that Apple founder and icon Jobs, who died on Wednesday at the age of 56 after losing a battle with cancer, originally came from Syria. As the news of Jobs’ death vibrated throughout the globe, young technology-savvy Syrians mourned his death, laying claim to a computer genius who revolutionized the world.

Steve’s groundbreaking creations, iPads, iPhones and Apple computers can be found all over Damascus and are especially popular with young Syrians, although because of US sanctions they cannot download any application from iTune stores.

“Steve Jobs was Syrian,” they proudly typed into their Facebook and Twitter pages, sadly acknowledging, however, that had he worked in Syria, he would probably not have achieved any of his innovations.

The story of Jobs’ Syrian origins was first published in Syria in early 2007, when the country’s English monthly Forward Magazine ran a story entitled “Forgotten Syrians”. The six-page report listed world celebrities who trace their origins, three to four generations back, to Syria. The list was a long and surprising one, and it included Bob Marley, Paula Abdul, Paul Anka, former Argentinean president Carlos Menem, and Steve Jobs.

Jobs’ mother, Joanne Schieble, was a German-American woman who had an affair with Abdulfattah Jandali in the 1950s, when they were living in Wisconsin. Her father refused to let her marry a Syrian Muslim, forcing them to give up the baby boy for adoption in San Francisco, where he was raised by Paul and Clara Jobs, an Armenian woman who after seven years of marriage was unable to conceive.

Eventually, Jandali and his girlfriend married, giving birth to their daughter (Steve’s sister) Mona Jandali, who went on to become a celebrated novelist in her own right, known by her husband’s family name, Mona Simpson. Her parents divorced when she was four, and in recent years, Simpson managed to reconnect with her father and brother, but no connection was made between Steve and his father. 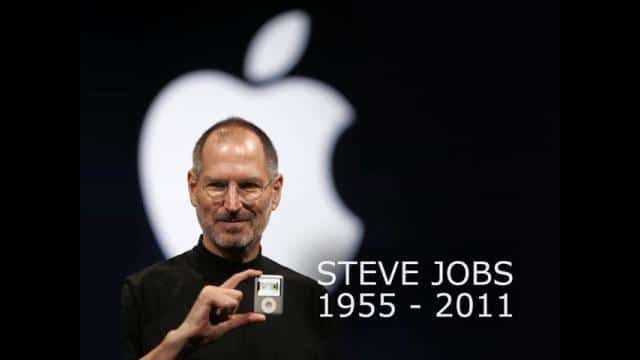 After giving up the baby, Jandali became a political science professor at the University of Nevada, Reno. Then he moved into the hotel industry where in 1999 he became food and beverage manager at Boomtown Hotel & Casino. He kept that post until 2010, when he became vice president of the casino.

While Jandali was making a living running roulette and poker tables, Steve Jobs was leading a very different life; taking over the world was co-founder, chairman and chief executive officer (CEO) of Apple. When he stepped down as CEO this summer, for further treatment of his pancreatic cancer, Jandali, now 80, mailed him his complete medical history, hoping it might help his ailing son – but Jobs still refused to speak to the man who had abandoned him 56 years ago.

Speaking to the London-based al-Hayat last February, Jobs’ father said he regretted having left his homeland Syria, and recounted stories of his university days in Beirut, where he was an ardent Arab nationalist. “If I had the chance to go back in time, I wouldn’t leave Syria or Lebanon at all. I would stay in my home country my whole life. I don’t say that out of emotion but out of common sense.”

He added: “Of course I miss the social life and wonderful food [in Syria], but the most important thing is the outstanding cultural attributes which in general you don’t find in the West.”

More recently, Jandali gave an interview to London-based The Sun, where he said: “This might sound strange, though, but I am not prepared, even if either of us was on our deathbed, to pick up the phone to call him. Steve will have to do that as the Syrian pride in me does not want him ever to think I am after his fortune. I am not. I have my own money. What I don’t have is my son … and that saddens me.”

He continued: “I honestly do not know, to this day, if Steve is aware of the fact that had it been my choice, I would have loved to keep him. I live in hope that before it is too late, he will reach out to me. Even to have just one coffee with him just once would make a very happy man.”

Syrians have the right to claim Steve as their own, regardless of how fate interfered after he was born. Needless to say, Steve is a legend that everyone wants a part of. He was an inspiration to entrepreneurs around the globe, and his genius changed the world for ever. But nothing could change the fact that his father came from Syria and has a pure Syrian name. In a place where family and lineage means a lot to people, the connection needs no more emphasis.

Haykal, who is soon to launch the Steve Jobs Entrepreneurship Award, added:

Steve Jobs is a personal inspiration. I e-mailed him three years ago about the idea of two let-down young entrepreneurs in Syria. He e-mailed back briefly, expressing no interest, but probably with the intention of lifting up their morale, and prove my argument then to them that even Steve Jobs was reachable and they shouldn’t be giving up.

Many Syrian entrepreneurs have inspired the world with their genius and creativity. I just wish they will some day be able to make their success in Syria. I wish Syria could someday give its budding entrepreneurs the eco-system and supporting environment, and not only the genes. Our expatriates make us a truly global nation too.

A nation-wide campaign needs to start, many Syrians are saying, to reclaim Steve Jobs. Syrians have done it before, reclaiming, for example, the Cairo- and Beirut-based musician Farid al-Atrash, whom the world remembered as Egyptian rather than Syrian. They then did it again with his sister, the diva Asmahan.

Reclaiming Steve Jobs might be more difficult, but it is a success story that Syrians want to be proud of.

Sami Moubayed is a university professor, historian, and editor-in-chief of Forward Magazine in Syria. This article appeared in Asia Times Online on October 7, 2011.