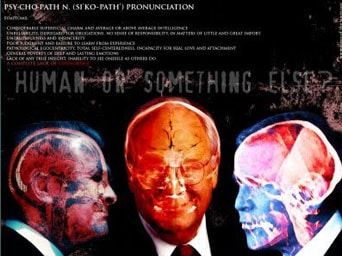 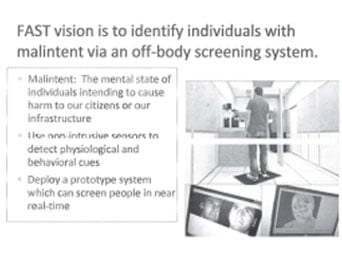 A cabal of psychopaths that rules the former USA has developed a new tool to detect and neutralize non-psychopaths who threaten their power.

That, at least, is the implication of a recently-uncovered Department of Homeland Security document revealing the existence of Future Attribute Screening Technology (FAST) – a “pre-crime” detection unit not unlike the one dystopian novelist Philip K. Dick dreamed up for “Minority Report,” which inspired the Tom Cruise film. And by way of homage to another great dystopian writer, George Orwell, FAST will red-flag individuals harboring what the ruling psychopaths call “malintent.”

This new “pre-crime” detection facility was discovered via a June 2010 DHS document that was acquired by the Electronic Privacy Information Center (EPIC). The document states that information is currently collected and retained on “members of the public” as part of the pre-crime system,  which is called Future Attribute Screening Technology (FAST).

FAST is made up of algorithms that use factors including gender,  age,  ethnicity,  heart rate,  body movements,  occupation,  voice pitch changes,  body heat fluctuations and breathing patterns to identify clues as to whether the individual(s) will commit a crime in the future.

The idea behind FAST is to prevent crimes from happening before individuals even have a chance to commit them based on the factors listed above. It is able to do this through the use of sensors that collect audio recordings,  video images and psychophysiological measurements.

“The department’s Science and Technology Directorate has conducted preliminary research in operational settings to determine the feasibility of using non-invasive physiological and behavioral sensor technology and observational techniques to detect signs of stress, which are often associated with intent to do harm,” said Peter Boogaard,  the deputy press secretary for the Department of Homeland Security.

The problem is that this kind of emotion-detection technology does not work against psychopaths – especially those psychopaths or near-psychopaths who have been trained to beat it by professional criminal organizations and intelligence agencies. Psychopaths compose that 1%-2% of the population that lacks normal emotional inhibitory barriers to grossly immoral and/or antisocial conduct. As Harrison Koehli said on my radio show, “If you were locked in a room in a burning building with an axe at hand, you would chop through the door to get away. A psychopath would chop through a human being just as easily as you would chop through that door.” 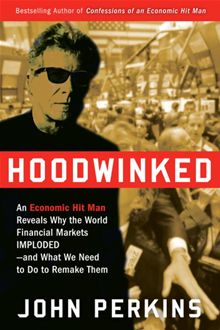 John Perkins describes how he was selected by IMF banksters as an economic hitman: They discovered that he was a bright guy who had been peripherally involved in a low-level crime and had successfully lied to cover up the more serious involvement of a friend. The bankers then administered Perkins a battery of tests. We may assume that the banksters were administering their own version of the standard exam for psychopathy, tweaked to select the kind of people they were looking for: those who score in the top 20% or so on the psychopathy test, who have high IQ’s and decent social skills, and who are capable of teaming up with other relatively amoral people against what we might call the moral majority, if that word hadn’t already been appropriated by another, religious-manipulative variety of psychopath.

Perkins, we may assume, is not a psychopath – not one of the top 1%.  That’s why they made him an economic hit man, rather than one of the professional killers or “asteroids” sent to murder heads of state who refused to take Perkins’ bribes. And that’s why he had enough of a conscience that the sight of the smoking rubble at Ground Zero, and the knowledge that his former colleagues had done it, made him a whistleblower.  Listen to John Perkins on my radio show: Listen to John Perkins on my radio show.

My point is that the banksters behind the series of coups d’état beginning with the establishment of the Federal Reserve in 1913, the aborted Smedley Butler coup in the 1930s, the Kennedy assassinations of the 1960s, the October Surprise of 1980, and the mother of all coups on 9/11/2001, have assembled a team of psychopaths and near psychopaths to take over and rule the planet. (The banksters themselves are probably DIPs, or Dominant Inbred Psychopaths, as Karen Tostado put it on last Wednesday’s radio show.)  x 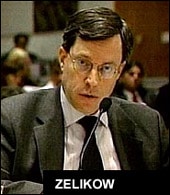 Their problem: The psychopaths are being found out, and the normals are getting angry.

And that’s where emotion-reading technologies like FAST come in.

Psychopaths, unlike normal people, cannot “read” emotions naturally and empathically. They spend their lives trying to cerebrally figure out how to predict and control the behavior of normal humans, by coldly “reading” emotional signs and responding with the appropriate manipulations.

Shock-and-awe operations like 9/11 are designed by such high-IQ psychopaths as Paul Wolfowitz and Philip Zelikow to induce learned helplessless in the terrorized majority of normals, allowing the DIPs to run roughshod over them.

The pathocrats are designing a dystopia that would boggle the combined minds of Philip K. Dick and George Orwell. They would love to set up a FAST-style pre-crime detection system to red-flag people harboring inappropriate emotions, such as anger at the pathocracy, which – when combined with a certain kind of steadfastness – marks that person a potential threat to their misrule.

I don’t know about you, but I am one of the people that FAST would red-flag: I am furious at the pathocracy, and committed to bringing it down by any means necessary.

We had better act swiftly, before FAST is deployed and all of us anti-pathocrats are neutralized.

For background on this topic, check out my article “Twilight of the Psychopaths.”