Home Veterans Palin Exposed, a Bestseller? No, But it Should Be 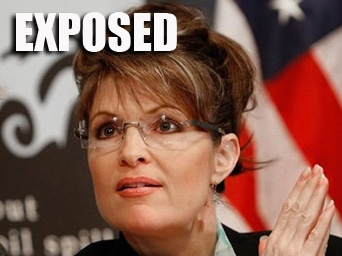 So much here—where to begin? Originally I wanted to use the timeless political line, Lipstick on a pig for the headline. Google the term to see why.

This maligned book, that made more news about its writing and research than it has since hitting the market—a fact proving the thesis of this review, which is Americans are generally more shallow and unthinking than the historical “unwashed masses.”

Also, our mass media is more criminally insane than the masses they manipulate.

Joe McGinniss, is a skilled craftsman, who, like Gordon Duff, swings left as he eyes the messed up geopolitics, which required Hegel’s wet dream—the organized two-party fraud—in order to become the money trap that it is. (not from the book)

Palin, is a media created darling that thrives by complaining how the media hates her. It’s a perfect role for this phony ‘Christian” that helps give churchists their hypocritical label; And we knew all this before the book was penned—at least those who are conscious with a working brain saw it immediately.

Palin burst onto the media circus as the “governor” of Alaska to be the running mate for another phony, never truly vetted by media type, John McCain.

One of the first skeptical waves in the media mirage stemmed from Sarah’s inability to answer a question about what she reads; she could hardly have told Katie Couric the truth over the air. McGinniss clears it up by pointing out two things. 1. She is devoted to the Narcissists journals such as People Magazine. And 2. “I never read anything that questions my beliefs.”

My wife, was not fooled for an instant. The second she saw “the mama Grizzly” hauling that poor handicapped baby around for the cameras, my wife had Sarah pegged. As did millions of others who were probably too flabbergasted to speak out, or were limited to very small audiences at home, etc.

The reason this obvious callous hypocrisy failed to make the televised rounds of talking heads is, to me, bigger than this book, or this entire political phenomenon.

People are mainly thoughtless saps, who fail to see the obvious—that the corporate media is evil and cares nothing for the truth, the best example has been the curtain over the truth about 9/11; the selling of Palin was child’s play next to that cover up.

Not only should she have been labeled another Israeli agent, or AIPAC spy spouting the Star of David everywhere, including on the wall of her office—facts not mentioned in this thoroughly researched book, which does tell all about her lifelong religious programming.

The town of Wasilla is now famous because of this “phenom.” The author points out in detail that the area is a bastion of Evangelicals—her original power base.

Christ taught everyone to judge others by their fruits, meaning their actions and behavior, and not by their words. This great lesson of Christianity is lost on prayerful hypocrites who knew Sarah personally yet supported her anyway.

Also, the “folks” of Wasilla were afraid of this Jezebel’s power and vindictiveness, so many shut up about her nature.

McGinniss opens with a flood of small town gossip, which he then works hard to document from public records and accounts.

The book is heavy with stories of how he was stalked, threatened and assaulted by the Internet and the allegedly hateful media, according to the “you betcha” bimbo. Right wing media hate was aimed at McGinniss.

McGinniss documents Sarah’s pathetic record as a public servant (choke on the term) first as the mayor of this town that deserved her, then as Governor of the State.

In fairness to Wasilla, practically every town in America is shrouded in local corruption of a similar sort. We, the people are the problem.

Nothing should forgive the twisted Christianity however; Saint Sarah was visited by the “Holy Spirit” and directed to follow “God’s will”

And like Joan d’Arc she was off and running to save the world without reading or studying the Bible.

McGinniss is not sympathetic to Christians, but he covered the curious, New Apostolic Reformation school of Bible twisting that spawned Sarah, Rick Perry and Michelle Bachmann very well.

The great birther story of Sarah delivering Trig, is also well laid out.
It is impossible to deal with it tastefully.

I urge everyone with a brain to read this book, which should last longer on the market than all the bullshit hype on the subject.