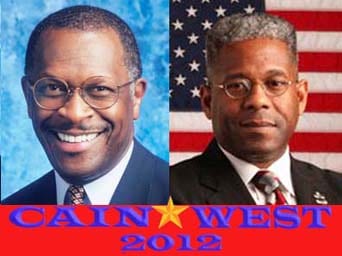 Herman Cain claims that the reason that black people won’t support him is that they’ve been brainwashed. And many conservatives are saying Cain is President Obama’s worst nightmare. I would have loved to have been in the White House when those statements came out. In spite of Obama’s laid-back demeanor, I’d be willing to bet that he was laughing so hard that he was rolling on the floor of the Oval Office in tears.

One would think that this man would have sense enough to know that no one takes him seriously – and especially the GOP. And if the GOP had ever taken the time to truly get to know the Black community, they’d know that the only thing more toxic to Black people than a flat-out racist, is a Black conservative (with the notable exception of Colin Powell, because he’s not really a conservative – he was just smart enough to flimflam the overseer, instead of the reverse).

Most Black people have very little use for Black conservatives. It’s not that we disagree with everything they say, but because we’re suspect of the reasons they’re saying it. With the possible exception of those who believe in talkin’ snakes, virtually without exception, every Black conservative I’ve ever known was a self-serving  opportunist. Their conservatism tends not to be so much grounded in their actual philosophy, as it is an opportunity to gain exposure and wealth. They realize that conservatives are looking high and low for Black people willing to step forward to validate their views toward the Black community. So they gleefully allow themselves to be used in return for personal wealth, position, and notoriety.

Clarence Thomas is a case in point. There is no way that a man of his renowned level of mediocrity should be sitting on the highest court in this land – in fact, he shouldn’t even be allowed to sit in traffic court. But due exclusively to his willingness to validate the conservative view of Black America, he’s been given one of this nation’s highest honors. Thus, Thomas’ very presence on the Supreme Court is a stain on American values, our fidelity to jurisprudence, and an unabashed affront to every Black person in America.

Clarence Thomas is allowing himself to be used as a national monument to every negative stereotype of Black people ever put forward – grinnin’, subservient, lazy, White-woman-lustin’, treacherous, dishonest, and ignorant. Then every time there’s a State of the Union address, Black people are forced to sit and look at his lecherous ass.

So the Black community looks upon Clarence Thomas in precisely the same way as White Americans look upon a man guilty of treason against the United States – and other Black conservatives are not far behind. Why? Because most of these people would have happily voted against the Civil Rights Act in order to promote personal interest if they’d had the chance. And to demonstrate how transparent they are, Thomas took the unprecedented action of lobbying his colleagues to except what has  now clearly been demonstrated to be a meritless challenge to Barack Obama’s eligibility to become President of the United States, while he didn’t say a word as the Supreme Court casually APPOINTED George Bush president after he lost the 2000 election. And with respect to the challenge to Obama, it took his colleagues, some of the most conservative White men in the country, to tell Thomas that he was going too far – and Black people are brainwashed?

People like Thomas tend to be self-serving accommdationists who are wholly lacking in character. Black people have suffered a long history of such people, going all the way back to slavery – in fact, it was probably a Clarence Thomas clone who sold us into slavery in the first place. These were the very same people who would informed on slaves who were trying to escape to freedom: “I don’t know what’s wrong wit him, boss. Ya jest can’t get him to appreciate nothin’ you do for us. What he needs is a real good beatin’. Want me to do it? I’ll do it real good for ya, boss.”

So having Clarence Thomas sitting on the Supreme Court, with his happy, grinnin’ face, eagerness to please attitude, and quintessential ignorance, is a bad joke at the expense of the Black community. His presence is the equivalent of giving every Black person in America the finger. It wouldn’t be any more insulting to Black people if they chiseled a picture of Buckwheat on the on the Supreme Court seal.

And now we have another ‘happy face,’ in the person of Herman Cain, saying that Black people won’t support him and his fascist overseers because we’re brainwashed? And this from a Black man whose advice do Black people during the deepest recession since the Great Depression is, “Get a job.” Please!  This is an absolute idiot.

Get out the whip, Rush – it sounds like Herman’s been into your stash.