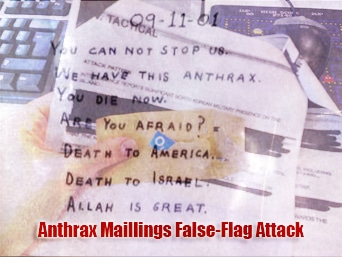 How long before they admit that 9/11, the other phase of the same event, was equally false-flag?

The US government officially admits that the 9/11-follow-up anthrax mailings were a false-flag attack, originating from the US military-intelligence community, designed to demonize Muslims.

How long before they admit that 9/11, the other phase of the same event, was equally false-flag?

Barry Kissin, expert on the anthrax aspect of the 9/11-anthrax event, will be my guest on Truth Jihad Radio next Monday, October 17th, along with former BBC lead Mideast correspondent Alan Hart.

The comment on this article I posted at nytimes.com was as follows:

Bingo! “If Dr. Ivins did not make the powder, one conceivable source might be classified government research on anthrax, carried out for years by the military and the Central Intelligence Agency.”


This theme is developed further in the paper by the three scientists that is the focus of this article: “[T]he most likely sites of production of the letter anthrax are laboratories that work with dry spores:  Battelle, Dugway, and DRES.  Battelle, for example, is well-known for its aerosol study capabilities … There is no evidence that relevant samples were ever collected at Dugway, Battelle or other potentially suspect sites.”

For an outline of the contours of the cover-up, see memo at www.fredericknewspost.com/media/pdfs/FortAnthrax.pdf

Press of Atlantic City November 8, 2006 | VANAMAN, JOYCE For The Press VINELAND – Tawanda King, a sophomore at Cumberland County College, missed being in the School Counts! program by a year, but that isn’t stopping her from being a strong advocate of the program.

King, 21, said she thinks schools throughout the county should be more actively promoting the program. It provides free tuition for students in grades nine to 12 who obtain a C or better in every high school course; maintain at least a 95 percent attendance and punctuality record; complete high school in eight consecutive semesters; and take more than the minimum graduation requirements. see here cumberland county college

A goal-oriented person, King, 21, graduated from Vineland High School in 2003 and worked at a store in Vineland for a year before entering Cumberland County College.

The criminal justice major said her immediate goals are to continue her education after graduating from CCC, at Rowan University and become a parole officer.

On her long-range agenda is getting a law degree and using it in the criminal justice field, perhaps in state government.

“Professor (Charles) Kocher is wonderful,” King said. “I’ve had many classes that he has taught, and he makes them very interesting.” Kocher is the program coordinator for criminal justice studies and a past recipient of the Professor of the Year Award.

“I like the diversity of our classes,” King said. “I like having older students in the class along with those who just graduated from high school.” One of four children of Jessie and Judy King, Tawanda said both her parents attended Cumberland County College and are employed in social work. go to website cumberland county college

“My father is a social worker at a juvenile detention facility and has motivated me to enter the criminal justice field,” King said.

Though she was accepted by larger colleges and universities, King said she chose Cumberland County College because of its accessibility and affordability and is glad she did.

At the 40th anniversary celebration of the college in October, King was one of the featured speakers and told the audience about her experiences at the college and some of the people who have made a difference in her college life.

“Kellie Slade (director of student life and athletics), helped me get adjusted and got me involved in the Student Leadership Program last year,” King said.

“Tawanda is a wonderful, progressive student leader,” Slade said. “She’s the kind of leader who takes charge and has a great passion for her work.” In her speech, King recognized Gabrielle Michaelis as “an awesome math professor.” “Debra Kuhl (chairperson of business, computer science and math) helped me with my schedule,” she said.

“This is a close-knit college, and it’s like a family,” King said. “A lot of people have helped mold my character. I feel that I’m getting a great foundation here.” King is a member of the Student Senate, African American Culture Club, Criminal Justice Society, Strategic Planning Committee and is the student representative to the college Alumni Board.

“I’m completing this week an 80-hour internship in the Cumberland County Sheriff’s Department,” said King. “It’s been an eye-opening experience. Some people think that they just do police work, but they do a lot more.

She said Sheriff Michael Barruzza, Undersheriff James Elliott and others in the field operations section have been very helpful.

“Last year, I worked part-time for the 21st Century program at Lakeside Middle School in Millville,” King said. “I like working with young people and enjoyed tutoring students in grades six to eight.” King said that she thinks young people should begin thinking about possible careers at an earlier age than they do now and then focus on what they need to learn.

“I would raise the legal age that a student could drop out from 16 to 18,” King said.

With her own strong desire to achieve success in whatever she does, King believes that the way to do this is to set goals and keep focused.