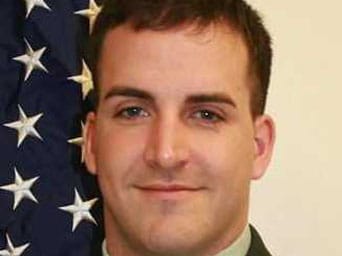 In what many described as a heated, often tempered, public meeting hosted by the Tracy, CA War Memorial Association, the Board upheld a previous decision to add the name of Staff Sgt. (SSG) David P. Senft (age 27) who committed suicide at Kandahar Air Base (KAF), to the Memorial commemorating hometown soldiers “who served their country in a time of war and who made the supreme sacrifice.”

The “wall”, a beautiful granite monument, bears the names of those who served in both World Wars I and II, Korea, Vietnam, Iraq and Afghanistan. The Tracy City Council accepted the Memorial in 1991 and allowed the War Memorial Association to decide which names of fallen heroes could be carved into the granite face.

There was opposition to Senft’s name carved on the memorial in perpetuum because he committed suicide allegedly making his service to country less honorable.

Scott and Julia Conover, residents of Tracy, whose own son, Marine Lance Corporal Brandon C. Dewey (age 20) was killed in Anbar Province, Iraq in 2006 by an improvised explosive device (IED) during his second tour of duty, told reporters they didn’t believe that Senft should be added to a memorial for those who served “honorably.” Julia Conover would not to comment about her opposition but did tell reporters that Senft’s suicide was “contrary to his Oath to serve.”

SSG Senft’s father, David H. Senft, disagreed, “While I respect the Conover’s right to feel differently than the majority I do find it disheartening that they based it solely on specific religious beliefs. I don’t think David ever cared if the wounded soldier he saved was Catholic or not.”

Two days after the meeting the David’s father reflected on his son’s death and his honorable service to his country.

He recalled, “On November 15, 2010, SSG Senft took another soldier’s M-4 Carbine, drove to secluded spot at KAF, hand loaded a single round and shot himself through the mouth. By his side was his cell phone, displaying a text message with no time or date stamp, saying only, ‘I don’t know what to say, I’m sorry.’ David died alone.

David was fast approaching the end of his 9th year in the Army. He was E-6 and on the verge of promotion to E-7. David was a crew chief and door gunner on a Blackhawk, had been for quite some time. He had completed 3 prior deployments and was again back in Afghanistan, well into his 4th deployment. He flew as part of a Blackhawk troop transport crew. These soldiers would receive the call that soldiers were down and their job was to fly into hot zones and extract the wounded. Quite often their ‘Bird’ would take incoming fire but that was part of the job according to David.”

The investigation into Senft’s death indicates that as early as 2005, Army Officials knew that Senft had threatened to kill himself. The AR15-6 report concluded that Senft’s death could have been prevented. In part, the report revealed, “There were missed opportunities for both the Chain of Command and the medical community. The previous Chain of Command at Fort Bragg should have taken a more active role so that Senft could have received better initial care.”

In 2008, Senft attempted suicide by taking several sleeping pills while he was at Fort Campbell, KY. He was unsuccessful and later agreed to enter a mental hospital in Hopkinsville, KY. After his release, he was given a desk job in Fort Campbell. In early 2010, Senft was redeployed to Afghanistan, and no one had an answer as to why he was sent back into a combat zone. In July 2010, he took leave and quietly got married. After his return to Afghanistan, his mental state worsened, so much so, that his weapon was taken away from him two months before his death. On the day Senft died, another member of his unit discovered his body.

The report also mentioned, “SSG Senft’s wife was the only person who had full knowledge of his full plan and his commitment to executing it but she was half way around the world on November 15 and could not notify his chain of command in time to save his life.”

Jon Mendelson, Tracy Press editor-in-chief said, “The fact that so many people attended what is usually a rather sedate meeting shows how big of an issue this is for our community. Not just for Tracy, but places all over the country. Our understanding of war and its impacts are changing. I think we’re realizing how deep the scars of war truly go, especially in Tracy, where Staff Sgt. Senft will be the eighth serviceman to have his name on our war memorial from Iraq and Afghanistan. (Our population is only 81,000). The Conovers are good people. They didn’t agree with the memorial association or the majority of the people who bothered to write in about the issue or spoke at the meeting.”

In America, we all have the right to agree or disagree and those who disagreed with Senft’s name etched into the Memorial have also suffered a tremendous loss. The City of Tracy through its Memorial honors all combat soldiers who did not come home.

The Veterans Administration (VA) reports the suicide rate among male veterans it serves under the age of 29 hit an all-time high in 2006 and continues to climb. Those in that age group are more than twice as likely to commit suicide as people in the general population.The Army says that suicides have more than doubled in recent years among active duty personnel. Post Traumatic Stress Disorder (PTSD) will climb to epidemic rates when soldiers begin to come home from Iraq and Afghanistan.

Senft’s IED was not a physical bomb, it was a mental and emotional bomb that finally exploded on November 15. Senft is survived by a wife and 5 year-old son, Landon, from a previous relationship.

His suffering was great but friends, family and fellow soldiers said his service to this country was admirable. David’s father said, “His final decision should not erase all that he was before that night. We love him none the less.”