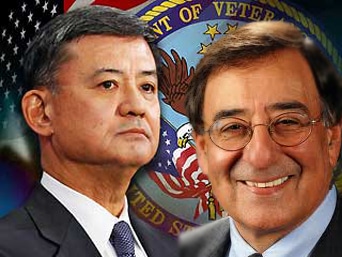 Shinseki hosted the latest in a series of quarterly meetings about ways to help smooth the path for military members as they transition to civilian life and careers.

Panetta and Shinseki lead a joint task force President Barack Obama established to promote veteran employment and boost separating and retiring military members’ career readiness. They agreed during yesterday’s talks on the need to provide each veteran with a cohesive employment search strategy and improve direct connections between employers and veterans, Kirby said.

Obama told the American Legion Convention in August that he had directed DOD and VA to create a “reverse boot camp” to help the newest veterans prepare for civilian jobs and translate their military skills into industry-accepted licenses and credentials.

Panetta and Shinseki addressed a range of other issues yesterday, Kirby said, including ongoing efforts between the two departments to establish joint integrated electronic health records and improve the disability evaluation system.

The meeting came two days before the president travels to Joint Base Langley-Eustis, Va., to discuss efforts under way to create more jobs for veterans and encourage more employers to hire them.

Obama lamented the unemployment rate among veterans during an Aug. 30 address to the American Legion’s national convention, and called on employers to take advantage of the “incredible talents” they have to offer.

Saluting the 5 million Americans who have served in uniform since 9/11 as a “generation of innovators” who have “changed the way America fights and wins its wars,” he said veterans also are the very people the nation needs to jump-start its economy.

“After a decade of war, it’s time to focus on nation building here at home,” the president said. “And our veterans, especially our ‘9/11-Generation’ veterans, have the skills and the dedication to help lead the way.”

Panetta reemphasized during congressional testimony earlier this week the need for the nation to support and keep faith with the men and women in uniform, even in the face of budget constraints.