While the US did not sponsor Mouamar Gaddafi in certain periods of his regime, it did engage him and according to certain reports facilitated his coming to power.

With the exception of Tony Blair, the modern day Lord Balfour who had “special” business and political relations with Gaddafi, every one in Libya and the Arab world is quite happy with the news of the end of Mouamar Gaddafi and his regime. 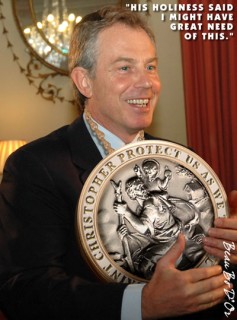 It is only fitting for a bloody dictator and a regime to meet a bloody end. No one should shed tears. Contrary to his claim to die fighting, Gaddafi was pulled from a sewer pipe like a rat.

Like so many bloody klepto-criminal dictatorships, Gaddafi was and for a time the darling of the West specially after abandoning his weapons of mass destruction program.

The US George Bush dispatching Condi Rice to engaged him and Hilary Clinton as recent as this January treated his son Moutasim as royalties warmly shaking hands with the towering Moutasim.

While the US did not sponsor Mouamar Gaddafi in certain periods of his regime, it did engage him and according to certain reports facilitated his coming to power.

With the exception of Fidel Castro the US engaged, if not sponsored, every dictator and dictatorships in Latin and Central America, in the Middle East, in East Europe, certainly in the Far East.

The US more than any other country in the world should take the blame for the millions who died and suffered under military dictatorship that not only killed and tortured its citizens but looted the country as well.

We all need to remember the likes of the late Shah of Iran who was brought back to power by coupe organized by the CIA with a planned budget of $1,000,000 with $100,000 distributed in cash to the streets and the remaining $900,000 was handed over by Kermit Roosevelt to Ardashire Zahedi as part of Operation Ajax.

The Shah who ruled his country with an iron fist relying on the CIA, Mossad and his torturous SAVAK also looted the country and allowed his close circle of generals and advisors to loot tens billions of dollars allowing them to live the good life in Switzerland, in West Europe, certainly in the US and around Washington DC.

While the people lived in dire poverty in the country side, the Shah was able to spend $100 millions on his coronation ceremony in 1967 in the city of Persepolis as King of Kings with heads of states, diplomats, movie starts counted among the guests with caviar, chefs and Baccarat crystals flown from France dinning on Limoges porcelain china.

Nicolae Ceausescu was anther dictator much beloved and admired by American presidents who received him in White House, simply because he took an independent line from Moscow when it came to the Middle East.

His relationship with Israel not withstanding his bloody and ruthless dictatorship and his looting of the country making every Romanian poor with the exception of his immediate family and his close circle of friends.

I will never forget that night in a Geneva hotel when I saw his execution on December 25th, 1989.

General Suharto of Indonesia and General Ferdinand Marcos were among the many dictators the US not only supported but sponsored delivering weapons and riot fighting equipments allowing these two to loot their country blind and run authoritarian bloody regimes with wide spread corruptions, all in the name of supporting anti-Communist regimes.

In Latin and Central the US and over the last century have supported and given aid and comfort to a dozen of civilian and military dictatorship key among them the likes of Anatasio Somoza Garcia and his family, Fulencio Batista of Cuba, General Noriega of Panama, and of course General Augusto Pinochet who ruled Chile with an iron fist for 17 years, murdering in cold blood mover 3,000 and torturing hundreds of thousands.

In Central America, the US could not find one military dictator it did not like.

The US sponsored, trained and funded the many military rulers and dictators that ruled Central America where some 500,000 people died or killed as a direct result of these military dictatorship and the wars they waged against their people and the resulting civil wars.

In Africa the story was no different, American presidents disgraced the White House with receptions offered to killers and murderers the likes of Samuel Doe of Liberia, who upon taking control in a bloody coupe tied more than 17 members of Liberian cabinet to palm trees and shot them.

Mobuto Sese Seko of Zaire was another favored dictator favored in Washington, Paris, London and Brussels. Mubuto Sese Seko took over Zaire in a CIA sponsored coupe on 14 September 1960 and ran Zaire to the ground while looting its wealth.

Western governments were only too happy to support such criminal dictators as long as they claim to fight Communism.

In the Middle East the story was no different. It is well known fact that the CIA not only provided safe house for Saddam when he was injured and fled the attempted assassination attempt on General Abdul-Kareem Qassem and later in 1968 sponsored his return to Iraq to become the VP of Iraq. 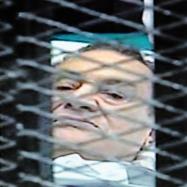 Hosni Mubarak and Bin Ali were the darling of the United States the model of modern Arab rulers and police states where dictators rule with iron fists making sure the country and the West id free of “Islamists” and rewarding these two regimes for their openness and special relationship with Israel.

No doubt the US which contracted countries like Egypt, Syria, Jordan and other North Africa countries as “torture contractors” was only too happy to seek these rulers and dictators and their families not only loot the country clean but imprisoned, killed and tortures tens of thousands of citizens.

Kelpto-dictatorship touted by the World Bank and the IMF as model emerging economies were millions lived below poverty lines and with millions unemployed.

International donors, financial instructions never looked beyond the “cooked” financial and economic books presented by the leadership of these countries and never bothered to leave their 5 stars hotels and see the utter misery the majority of people lived in.

In Syria, in Yemen perhaps with these dictators meeting the same bloody end. Those who rule by the sword will die by the sword. Grieved, oppressed, tortures and dramatized people should not have mercy on those who rules them.

In closing I want to address this question to President Obama and the leaders of the West. Why is it OK for the Libyans, the Syrians and the Yemenis, the Egyptians and the Tunisians to rise up against oppression and dictatorship and in the case of Libya to use force with support from NATO.

Yet the Palestinians are denied the right to have a seat at the UN to seek freedom and independence from the Jewish Occupation, not by use of arms but by getting a UNSC resolution to demand the immediate end of the Jewish Occupation that lasted more than Gaddafi 42 years of bloody rule? An explanation is needed.