Home Veterans All Men Are Created Equal – Except Homeless Veterans 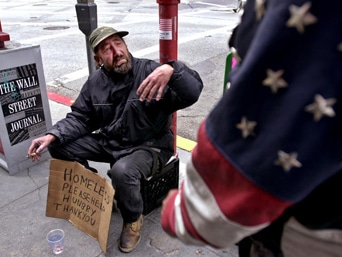 Since our nations founding, America’s Veterans have fought for our liberties contained within our Constitution and Bill of Rights. Among these are life, liberty and the pursuit of happiness.  Not all men (and woman) are created equal however, nor do all Americans have freedom of speech. Homeless Veterans are not equal and certainly do not have freedom of speech, the kind of freedom of speech that modern technology provides to you and me everyday.

Communication is at the core of every  American citizens ability to strive and survive.  It is the method by which our society exchanges information and provides for the coordination of services, especially employment and health care that separates us from other societies. Imagine a nation where the ability to communicate was denied to a significant segment of their population, especially a segment that had fought and died to provide freedoms to that society because of their economic status.  Well, you do not have to imagine that scenario because it exists today among our nation’s homeless Veterans.

That’s why the “Veterans Workshop”a new national veterans nonprofit  announced today the development of a community based program to provide “Limited use’ cell phones, under development with AT&T, to homeless Veterans so they can begin to travel the road back to full and equal citizenship with their fellow Americans.  The Veterans Workshop plans to distribute cell phones, starting in 2012, with “find me” technology if lost and with battery charges to homeless veterans residing in shelters in the eastern United States as a demonstration project so that they might enjoy the same freedom of speech afforded to their non Veteran counterparts.

These cell phones – with limited calling range – will enable Homeless Veterans to stay in contact with their Department of Veterans Affairs Medical / Mental Health providers, as well as their local Police and Fire Departments in case of emergencies they experience on the street. And the workshops plan permits them to also have specific family/friends contacts numbers. Working with senior staff of AT&T, a special “Limited use” phone is being developed.

In addition, the workshop  plans to coordinate this program in conjunction with both the Federal Departments of Veterans Affairs (VA) and the Department of Labor (DOL), as well as State Veterans Services Offices.

For example, a homeless Veteran seeking employment will be able to coordinate with their local DOL Veteran Employment and Training Services (VETS) Officer to both make and receive calls to prospective employers and/or training sites. Homeless Veterans will be able to arrange for their special medical and mental health needs with their community based VET Centers, as well as VA staff/volunteers being able to call and ascertain a Veterans medical status and well being.   The Department of Veterans Affairs has a new “National” homeless veterans hotline, but no way for a homeless veteran to call that toll free number, seeking assistance.  This model will help to “surge” the large number of homeless veterans, estimated at over 350,000, into services that are provided by the VA.

As you can imagine, the possibilities of this program are extensive and worth a favorable review by all Americans and our government agencies.

The Veteran Workshop plans to seek both US Veteran Service Organizations (VSO’s), small and large not for profits anddditional corporate telecommunications leaders sponsorship of this program.  The Veterans Workshop is not opposed to asking multi national corporations for their involvement in this worthwhile effort.

Veterans Advocate Bill Pittman, M.Ed. , Director of Special Programs for the “Veterans Workshop” and alum of Boston College will help launch this program in Washington DC with a homeless veteran calling his VA outpatient clinic coordinator in early 2012.  Together with support and encouragement, all Americans can bring a voice to those who have given so much.  Homeless veterans are asking for a voice because they are now -voiceless.

For further information and to find out how you can help  please contact:  Homeless Veterans Freedom of Speech Initiative at  202.695.8049