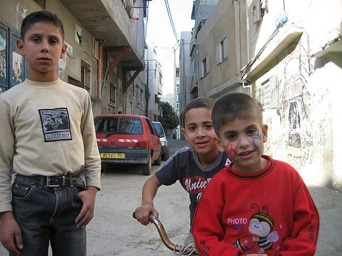 Joharah Baker is Director of the Media and Information Department at the Palestinian Initiative for the Promotion of Global Dialogue and Democracy (MIFTAH). She wrote:

It has been just under a week since the historic deal between Hamas and Israel saw the release of captured Israeli soldier Gilad Shalit for 1,027 Palestinian political prisoners.

In Israel, an entire nation let out a sigh of relief that their son had come home safely.

There is no arguing the intense human aspect behind this prisoner release. But what so much of the western press in particular has bypassed so far is the human aspect of our prisoners, who unlike Shalit, have been bunched up into one unappealing category: murderers, terrorists, people out for blood. And who wants to give a human story to that?

I do and have ever since my first of seven trips to Israel Palestine in June 2005.

Born in Bethlehem, Rev. Dr. Mitri Raheb, has been the Pastor of the Evangelical Lutheran Christmas church in Bethlehem since 1988. He is the General Director of the International Center of Bethlehem/ICB, which provides the people of occupied territory training in arts, crafts, training and degrees in media and communications and health and wellness programs for youth and the elderly.

“It’s a miracle that the Palestinians are so nonviolent in spite of the abuse we live with on a daily basis. If you lived here every day you would get fed up too. The world assumes it is the Palestinians who are the violent ones, but nonviolence is who we are. If you operate in a system of violence you will also be violent when you go home.
“Palestinians who throw stones; and many think that is ok, but I say why do that? One day you will throw stones at Palestinians too and that is exactly what happened in Gaza, but the reason is the occupation! Where do you think Hamas learned to torture? In Israeli prisons from their captors!

“There is no way to end the violence without first ending the occupation. Our Palestinian government was boycotted for a year and a half by America and the EU: this is violence! As long as the violence is exercised against us that is OK with the world. When the Presbyterians talked divestment the Zionist rose up and said ‘you can’t do that!’

“I started interfaith dialogue in 1985 because Christians should not be islands and you don’t dialogue just with yourself, you must dialogue with the other and the biggest temptation for the church is to stay within their walls and only be dedicated to their own members; which leads to a dead church. We are called to go out, and we do not just preach with words, people here are fed up with words; they hear one thing and see another with their eyes.

“They hear peace, peace, peace and for 85 years the politicians have been working for peace and the situation gets worse. Blair, and all the politicians are into PR for themselves; they do nothing for our situation. Blair got himself a good job marketing himself and he will come and go and Israel will continue building the wall, settlements and carving the West Bank into Swiss cheese; Israel gets the cheese and we Palestinians fall into the holes!

The Wonderful World of Tony Blair