Home Life Jesus in the Talmud, What is this? 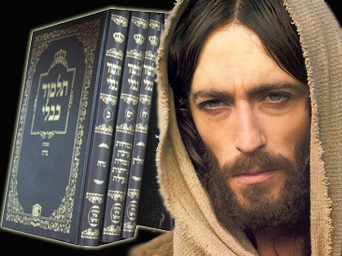 It is more than a ‘scholarly’ book, published in 2007 by Princeton University press; It is notable for finding factual references to the life of Jesus in caustic Rabbinic texts, and for being a counterbalance to the infamous Talmudic tradition that it’s okay to lie and deceive us ‘goy.’ I review this book as best I can from the position of an aroused and thinking Christian goy.

The cruel canard‘anti-Semitic’ does not apply for many reasons, not the least of which is the simple fact that the slanderous word itself is derived from language games for purposes of propaganda and in real world context has no validity.

Since the‘Semites’ referred to are no such thing and the powerful Talmudists have earned enmity and disrespect through word and deed for 2000 years, as this’scholarly’ book ascertains, I utterly reject the label anti-Semitic, however I proudly wear the tag that I am profoundly anti the‘Conspiracy of Zion.’

With that out of the way, let’s consider this book that is available from Amazon.com where customer reviews are posted. I will not review the reviews. You can check them in a jiffy.

Essentially we learn that there were two original Talmud sources the first in Palestine (The Jerusalem Talmud Schafer says; but typically it was not in Jerusalem where the Pharisees and scribes wrote this stuff in Aramaic, but about 60 miles away in another town probably because the Romans had destroyed Jerusalem a few years before these writings were written.
The‘Babylonian Talmud’ was scribed over a few hundred years duration in Babylonian cities, commencing about a hundred years after the Rabbi sect moved away from emerging Christianity into the‘cradle of civilization’, where they felt more free to attack Jesus.

Schafer accepts many details from the earlier writings over the later because they reflect the culture and times when Jesus Lived and performed his‘magic.’ The scribes adhering to the G-d tradition never wrote the name of the person they ridiculed, So Schafer can only infer they are writing about the Jesus of the New Testament.

In a classic irony, the writings of those who wish to claim Jesus never existed, literally confirm not only his existence but the early dates for writers of the Gospels. Essentially the‘synagogue of Satan’ published validation of their worst enemy his existence and his miracles as they denigrate both.

You cannot read this book quickly, you must invest considerable concentration, after all, it is‘scholarly.’

I have also read‘Judaism Discovered’ by Michael Hoffman, a book I heartily recommend for anyone wanting to try understanding the basis for controversy, wars, and bitter hatreds during the past 2000+ years.

This issue is most important in these times when the 2000-year war is coming to a head.