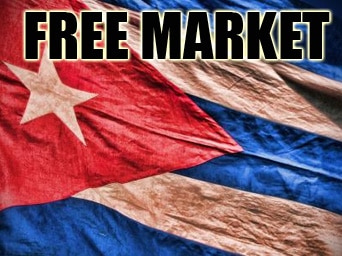 Cuba is undergoing a “silent transition” from socialism to a mixed economy but the U.S. hasn’t responded with diplomatic initiatives, an authority on Latin American affairs writes.

“A series of economic reforms are shrinking the size of the state-run economy and making room for a greatly expanded private sector,” says Michelle Chase, professor of Latin American history at Bloomfield (N.J.) College.

The reforms are being instituted slowly, however. Roberto Veiga Gonzalez, a progressive Catholic editor of a journal published by the Archdiocese of Havana calls the gradual transition “responsible,” but adds Cubans needs the reforms now because they can’t take the hardship any longer. Cubans are enduring hard times. Many families are already spending 80% of their income just on food.

Writing in the November 7th issue of The Nation magazine, Chase says some in the government want economic reforms modeled after China and Vietnam but others “want Cuba’s reforms to be tailored in a way that would give priority to small, worker-owned cooperatives” that are a kind of “decentralized socialism.”

Whatever the shape of the future, Raul Castro, who promised Cuba would never return to capitalism, appears to be doing just that. A year ago, Chase writes, he directed mass layoffs of government workers to trim a bloated bureaucracy and designated new areas for entrepreneurial expansion.

Since last April, Havana has granted some 330,000 licenses and the newly self-employed, known as cuentapropistas, are now allowed to hire Cubans outside of their own families. “The government’s stated goal,” Chase writes, “is to have nearly half the populace working in the private sector by 2015. For a country where nearly 90 percent of the economy was once in state hands, that will be a major about-face.”

Whereas in 1990, liberal reforms in Cuba were viewed as “a necessary evil” today, Chase explains, “the leadership actually embraces the notion of a robust private sector.” Adds Omar Everleny, a professor at the Center for the Study of the Cuban Economy at the University of Havana, “When you read the Guidelines and Raul’s speeches, you realize he’s determined to change things….he’s made the decision not to turn back.”

A key factor slowing Havana’s reforms “is undoubtedly the U.S. embargo,” Chase writes, as it has “a toxic, distorting effect on internal Cuban politics.” She explains, “Washington’s openly stated goal of destabilization and regime change creates a sense of permanent crisis, a siege mentality, in the leadership. This has long had the effect of limiting internal debate and bolstering hardliners who view any critique as a dangerous prelude to subversion.”

What’s more, by blocking American tourism, for example, “the U.S. government is in effect slowing the growth of Cuba’s private sector” where the government has opened the doors for Cuban businesses to operate.

Reviewing the past few years, Chase writes, it is apparent “a transition of sorts has already happened in Cuba. Raul Castro…and his cohort now openly embrace market reforms and have implemented measures to foster a large private sector….In addition, with the Catholic church serving as intermediary, the government recently released most political prisoners….If there has ever been a time for the US government to acknowledge internal reforms and reciprocate with increased diplomacy, that time is now.”

Americans, however, may have a long wait before Washington turns to diplomacy. The U.S. attitude has long been “do it our way (economically) or else.” Countries, including Cuba, whose rulers tried non-capitalist economic approaches, have been attacked militarily by the U.S. or its surrogates and/or destabilized by the Central Intelligence Agency. At times, the leaders of those countries were assassinated by the CIA.

America’s Founders established a policy of realism in matters of diplomacy. They held governments in power were governments the U.S. would recognize because we needed to treat with them, whether we liked them or not. Modern presidents trampled this common-sense approach for years by not recognizing Soviet Russia and Communist China. And they are still withholding it from Cuba. The authors of the Constitution might well be appalled if they knew the CIA backed the Bay of Pigs invasion in 1961, tried to poison the Cuban sugar crop and wreak other calamities on the country, and made at least eight attempts on the life of Fidel Castro.

With Fidel out of power and his more rational brother in charge, now is the time for the U.S. to open talks leading to improved U.S. relations with Cuba, as well as full liberties and economic opportunities for the Cuban people.

Sherwood Ross, who formerly reported for major dailies and wire services, is director of the Anti-War News Service. Reach him at [email protected].