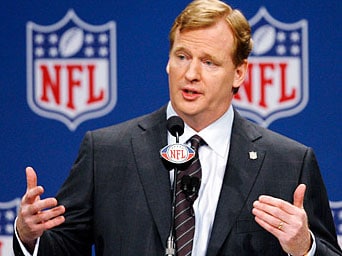 Today, the NFL hosted a regular season game in Toronto Canada when the Buffalo Bills played the Washington Redskins.  Being that the NFL continues to toy with expansion into other countries, the event in Canada make cents.

Canada is the USA’s 2nd largest neighbor with over 30 million people. The national language is English and they already have a small established pro league with fans that are knowlegdable about the the game.   I say kudos as it makes economic cents.

From a hidden point of view, it makes even more cents as the Trilateral Commission inches itself towards a North American Union over the next 50 years, but that’s another point of discussion.   What’s pressing is the next 20 years….and how will the NFL expand it’s reach and go multi-national as it’s leaders who’ve embraced the future want it to go.

A few weeks ago, the NFL was back in London England (U.K.) which does NOT have a history of American football that is prevalent.  Moreover it’s on a another continent and in a time zone that is NOT anywhere close to North America.  The only thing that makes cents for this forray into the European zone is that the national language is English.  Is that good business?

But to this author, what really does NOT make cents is that if the NFL truly wants to expand it’s audience, the obvious is staring them in the face and they either don’t see it or have judged it to be a non-starter, which would be completely misguided.

What am I talking about?  Mexico!  That’s right Mexico!

Consider the facts and not the current xenophobic atmosphere promoted by certain political agendas currently infecting the USA……..

All in all, Mexico simply makes more cents than the U.K. by far and by shear numbers, it makes way more cents than Canada.  So why the blackout?  I contacted the NFL Office to ask and got ignored.  Apparently, they don’t want to talk about it.

So hey NFL!  Consider this!

If the Mexico City Jaguars got in to the Super Bowl, can you imagine 100 million extra people watching on TV rooting for their team?  And if by chance, they win it all can you imagine the massive party in the streets?  From a business standpoint, that translates in huge dollars; both from TV revenue and merchandising!  It would effectively increase the revenue for the NFL by at least 20% on the low and probably 40% on the high.  This is absolutely astounding numbers!   Huge by any measure.

From a business standpoint, this makes cents folks!

Well, I have heard the vitriol about drug dealers, war on drugs, dirty people, brown this and short that, blah blah blah……. but really, that’s hyperbole and bording ignorant racism and it has no place in an serious intellectual discussion the issues.

For those of us that have actually been to and lived in Mexico, we know the truth that it’s safe live there and frankly, it’s more safe that many of America’s most celebrated cities.  But of course, we are dealing with an extreme negative perception dealt to the public by a media and it’s assigns that have an agenda.

So if the NFL wants to capitalize on the market demographics, then it must make a move against the forces that perpetuate the lies about Mexico.  In short, they would need to lobby and get the USA news leadership to stop creating fear without reason and stop scarring the U.S. citizenry.

Those of us in the blogsosphere know that this is a herculean job as we’ve tried to put a cork in all the fake threats invented to rile up the masses by the powers that be.  We’ve had to endure fake WMDs, fake terrorists, fake threats from everybody and his mother, and watch as our Presidents presided over fake wars and fake killings of all the Osama Bin Ladens who’ve been fed to the sharks without any evidence.

In short, we’re dealing with a huge complex of powers that control our media and heretofore, the masses and their “public opinion”.

So of course, if the NFL wants to really win the market share, it will have to overcome this systemic targeting of it’s largest neighbor by the globalists who control our media.  But the good news is that they really have the money to do it….they can buy this perception and create a new one; hopefully a real one and not this fake one we all have to suffer through.

Now the only real argument with evidence against Mexico expansion that I have heard is that the NFL players don’t want to live in a culture that’s not the USA.  But that argument goes for the U.K. as well – Canada not so much as Canadians, in the eyes of U.S. citizens are really Americans without the politics!

Now wanting to live where you are comfortable is completely understandable.  But when a player is being paid $ 5 million to play, he goes where the job is period!  Whether that’s Canada, U.K. or Mexico.  So really that argument does not suffice or take precedence over a business decision that makes cents.

For all you anti-North American Union in the crowd, don’t panic!  The NFL is leaning towards the U.K. and Canada and Mexico is completely off their radar now.  But really, it’s a huge business missed opportunity and that’s sad because Mexico has way more fans of the NFL than both Canada and U.K combined.  More, the real truth is that the North American Union is coming like it or not.  It’s already been decided by the powers that be.

Now, you can argue with me all you want and pretend I or you have a say.  We don’t!  We are just working for the man.

So from a business standpoint, you can either fight the coming wave and get crushed by it’s power or ride it in smooth like surfer on long board.

Me?  I am no dummy.  I am an activist but even I know that when a 350 lb NFL lineman comes at me with 4.5 in the 40 speed, this old man steps aside and rides his back to the touchdown.  There ain’t no way I am getting run over for dead with my principles buried deep into my arce!    Some call that cowardly..some call that practical .  I call that common cents!

Here’s a fact!  Latin America is on the move and if don’t embrace it, our struggling and decrepit economy will continue to suffer.   Dam the Xenophobia!  It’s not working!

In closing. let me just say that the future is on it’s way and there is no stopping it.  Put a cork in it and it will explode in our faces. Embrace the reality and we have a real chance of competing and being a viable vibrant economy where our tribe will be successful.  It’s all about leadership.

So NFL, reconsider your strange attempt to tame Europe and embrace North America instead because this where we all live!

My advice?  I say get your Mexico City Jaguars jersey and root for constructive success on our continent.   It’s important to our 21st century success.  And don’t worry….you wont’ turn into a tequila laced fish taco!