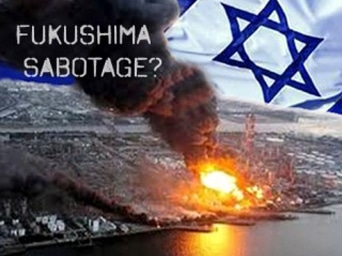 In retaliation for Japan’s support of an independent Palestinian state

A leading Japanese journalist recently made two incredible claims about the Fukushima power plant that suffered a nuclear meltdown in March 2011, sending shockwaves around the world.

First, the former editor of a national newspaper in Japan says the U.S. and Israel knew Fukushima had weapons-grade uranium and plutonium that were exposed to the atmosphere after a massive tsunami wave hit the reactor.

Second, he contends that Israeli intelligence sabotaged the reactor in retaliation for Japan’s support of an independent Palestinian state.

According to Yoishi Shimatsu, a former editor of Japan Times Weekly, these nuclear materials were shipped to the plant in 2007 on the orders of Dick Cheney and George W. Bush, with the connivance of Israeli Prime Minister Ehud Olmert.

The shipment was in the form of warhead cores secretly removed from the U.S. nuclear warheads facility BWXT Plantex near Amarillo, Texas.

While acting as the middleman, Israel transported warheads from the port of Houston, and in the process kept the best ones while giving the Japanese older warhead cores that had to be further enriched at Fukushima.

Shimatsu credits retired CIA agent and mercenary Roland Vincent Carnaby with learning the warheads were being transported from Houston.

In a strange twist, Carnaby was mysteriously shot dead less than a year later by Houston police at a traffic stop.

He was shot once in the back and once in the chest. He did not have a weapon in his hands.

Intelligence sources said he had been tracking a Mossad unit that was smuggling U.S. plutonium out of Houston docks for an Israeli nuclear reactor.

In an even more explosive charge, the journalist says that 20 minutes before the Fukushima plant’s nuclear meltdown, Israel was so upset with Japanese support for a Palestinian declaration of statehood that it double-crossed Japan by unleashing the Stuxnet virus on the plant’s computers.

The virus hampered the shutdown, leading to fallout from a section of the plant housing uranium and plutonium retrieved from the warheads supplied in 2007.

While it is impossible to verify some of Shimatsu’s claims, there was a massive cover-up at the time of the Fukushima disaster in March. Explosions at the site were immediately downplayed.

While it was subsequently reported that three reactors suffered meltdowns, Japanese authorities tried to rate the disaster as a Level 4 on the International Nuclear and Radiological Event Scale, although outside experts declared it a 7, which is the highest level.

Something worth noting is how in 2009, two years after Shimatsu says the warheads were secretly moved to Japan, the International Atomic Energy Agency (IAEA) issued a veiled warning to Japan not to abandon its anti-nuclear weapons policy.

The IAEA had to know, however, that Japan has long retained the potential to build nuclear weapons.

That was made clear as far back as 1996 when a leaked Ministry of Foreign Affairs document exposed how Japan had been promoting a dual strategy in respect to nuclear weapons since the mid-1960s.

It would often publicly profess a non-nuclear policy while maintaining the ability to build a nuclear arsenal. The Liberal Democratic Party, which has dominated Japanese politics, has always said there is no constitutional impediment to nukes.

A factor that undoubtedly would have encouraged the Bush-Cheney White House to provide Japan with the means to secretly build nukes was the growing power of China. Cheney and Bush sought to arm Japan and India with nuclear weapons as a means of curbing China.