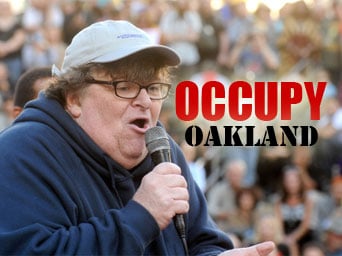 Michael Moore’s half hour video at Occupy Oakland isn’t intended to represent the “Occupy” movement as one of the left.  Increasingly, we are seeing the movement cross former political divides.

I don’t expect my former neocon friends, no sane person can still consider themselves a “neocon” to kozy up to Michael Moore but his message does cross lines and touch every aspect of America.

My own kids are at “Occupy” movements, some at least.  Should I be prouder of those fighting to save America in America than those overseas in Afghansitan?  Who is really fighting for America.  All may be heroes but now we ask, who is at greater risk and certainly, we know who is fighting the real enemy.