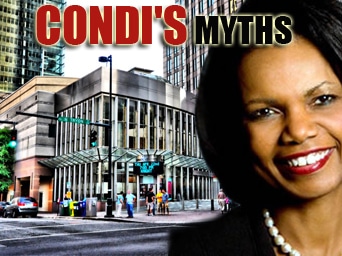 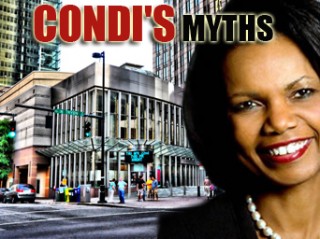 There is no living group of individuals who have done more to undermine crucial values than those who worked in the Bush Jr. White House.

Condoleezza Rice was both National Security Advisor and Secretary of State under President George W. Bush. She was also an administration spokesperson who helped scare the American people into supporting the invasion of Iraq. She accomplished this by invoking the image of “mushroom clouds” incinerating the skylines of America. In doing so she gave credence to the false story that Iraq was a threat to the United States because it possessed weapons of mass destruction (WMDs).

Rice is presently on a lecture tour promoting her 734 page memoir entitled No Higher Honor (Crown, 1 November 2011). That is what brought her to the Belk Theater on the campus of Queens University in Charlotte, North Carolina on 25 October 2011. There she spoke to a packed house of 2000 people. Actually, what made this event notable was not the large numbers who had come to hear her, but rather that, among other things, Condoleezza Rice chose to speak about values.

According to Ms Rice our present challenge “is not China or Brazil or India, and certainly not Europe. The challenge is the United States gone bad.” Well, she should know. Despite the fact that values are fluid concepts most people esteem the precepts underlying honest government and respect for the law. Most but not all, and it may very well be that Rice is not with the majority on this. There is no living group of individuals who have done more to undermine these sort of crucial values than those who worked in the Bush Jr. White House. Truth in government, due process in the Justice System, personal protection from official spying, regulating economic greed and corruption, and a general respect for the Constitution and its Bill of Rights, you name it and they managed to trash it. And, of course, Condoleezza Rice was there throughout the entire eight year assault on those sort of values.

Not surprisingly, in her Charlotte address Rice avoided these topics and instead focused on the value found in equal opportunity. “The idea that you can come from humble circumstances and also do great things” seems to her beyond the reach of today’s American youth. That is one of the ways America has “gone bad.” Ms Rice seemed to be suggesting that she is one of the last to be able to make this leap, coming as she did “from segregated Birmingham to the highest reaches of government.”

It has always been one of America’s foundational myths that any child can “grow up to be president,” or the CEO of some giant corporation, or just become fabulously wealthy. Of course some do. Some people hit the lottery as well, but the numbers are exceedingly small. This reflects the very low probability that any one individual, not born with the proverbial silver spoon in their mouth, can succeed to this extent. The hard fact is that any suggestion on the part of Ms Rice that there has ever been a time when such a jump from rags to riches was possible for most Americans is as misleading as the stories she spun to help get us into the Iraq war.

Yet it is clear that this myth never seems to die. For instance, it is this misconception that leads ordinary Americans to often oppose fair taxation of the rich. After all, someday they or their children might be rich and they won’t want to be taxed either. This is the “lotto nation” syndrome sometimes referred to by Keith Obermann. Not only is Rice a true believer in this myth, but she seems not to understand that it was her boss, George W. Bush, who pushed economic policies that made her special value of equal opportunity ever harder to achieve. One wonders if she was really paying attention during those eight years in the “highest reaches of government.”

Not wanting to be entirely negative–after all the “U.S. gone bad” is pretty tough–Ms Rice sought to end her talk on a high note. Despite all, she told her 2000 strong audience, “I believe we will again make the impossible dream inevitable.” What an unfortunate contradiction in terms from a lady whose day job is teaching at Stanford University.

But it is not Ms Rice’s words that are at issue here. It is her sense of values. Condoleezza Rice might have improbably risen out of segregated Birmingham, but for what? What sort of values did she display? What great things did she accomplish? Well, she assisted in the killing of between 600,00 and 1 million Iraqis and over 33,000 Americans and did so on the basis of false claims. This is the sort of record that ought to put one before the International Criminal Court and not in the halls of a great university.

Compared to others of our age who have risen from obscurity, people such as Martin Luther King, Malcolm X, Rosa Parks, Caesar Chavez, etc. Rice’s sense of values is just appalling. The fact that she rose to the “highest reaches of government” suggests a Faustian bargain that led to eight full years of the corruption of values. Her memoirs, No Higher Honor, is therefore grotesquely miss-titled. Indeed, it is hard to imagine a more dishonorable record.